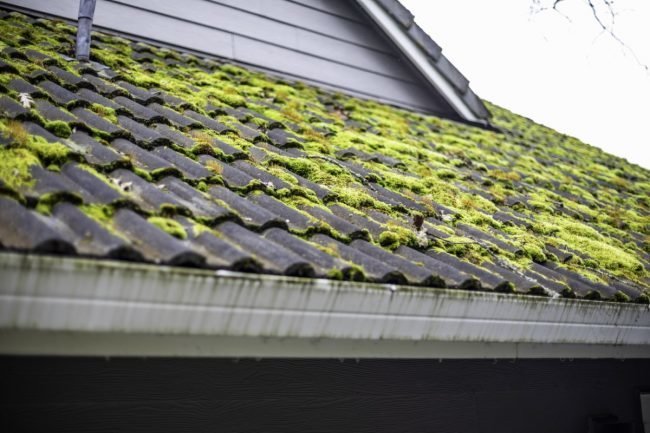 How to remove moss from the roof in a natural way

Although there are people who like to have a layer of moss in their home to give it a vintage and mystical style, this plant poses problems for the structure it is in, especially when it comes to the ceiling. Because of its rapid growth, you may want to know how to naturally remove moss from the roof to be prepared in an emergency.

Moss is a type of plant that grows in damp and dark areas. For this reason, it is common for houses in the northern hemisphere that moss suddenly grows on the north side. It occurs in the opposite direction for the inhabitants of the southern hemisphere.

Regardless of where it grows, we need to get rid of moss as soon as possible if we want to maintain the structural integrity of the construction. The moss on the roof can quickly damage its building material, especially if it is made of wood.

If the moss is not removed regularly, the water will seep through the tiles, which will become a much bigger problem. Fortunately, the cleaning process is relatively simple.

What is moss and how does it spread? 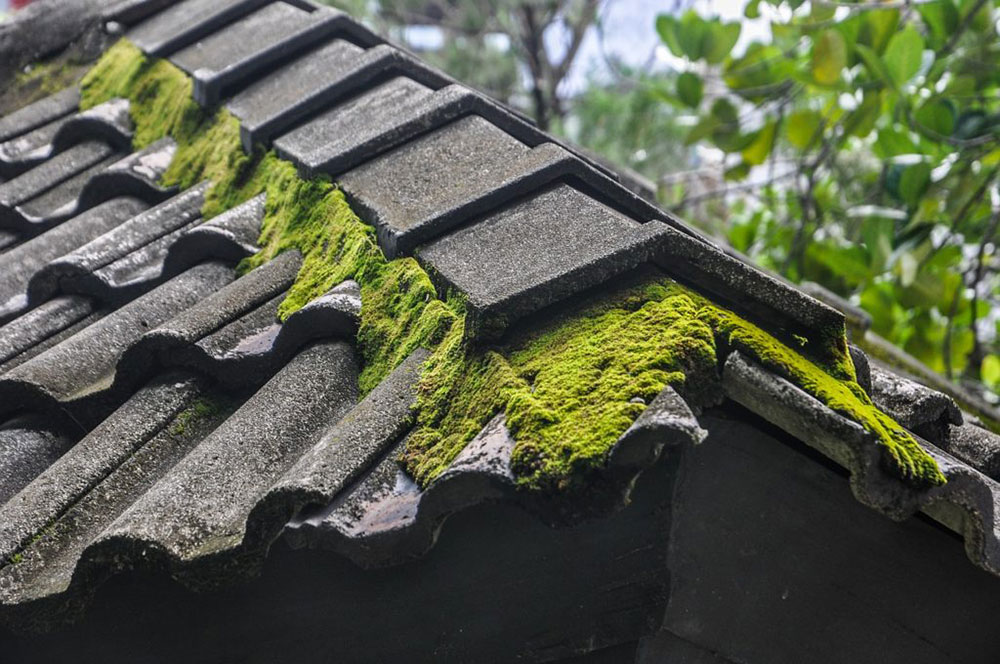 Moss is a plant that absorbs water through its leaves. Unlike other species, it doesn’t need soil to grow because it doesn’t get the nutrients it needs to live through the roots.

If no land is needed, it can expand in any room where it has enough moisture to develop. Moisture accumulates mainly in areas with little sun exposure, and since moss doesn’t need it to survive, the plant can grow in any dark area.

In the United States, due to the direction of the sun, it is common for moss to grow on walls and ceilings that face north. Another factor that contributes to the growth of moss is the shadows created by other trees, so houses near forests are more likely to acquire them. 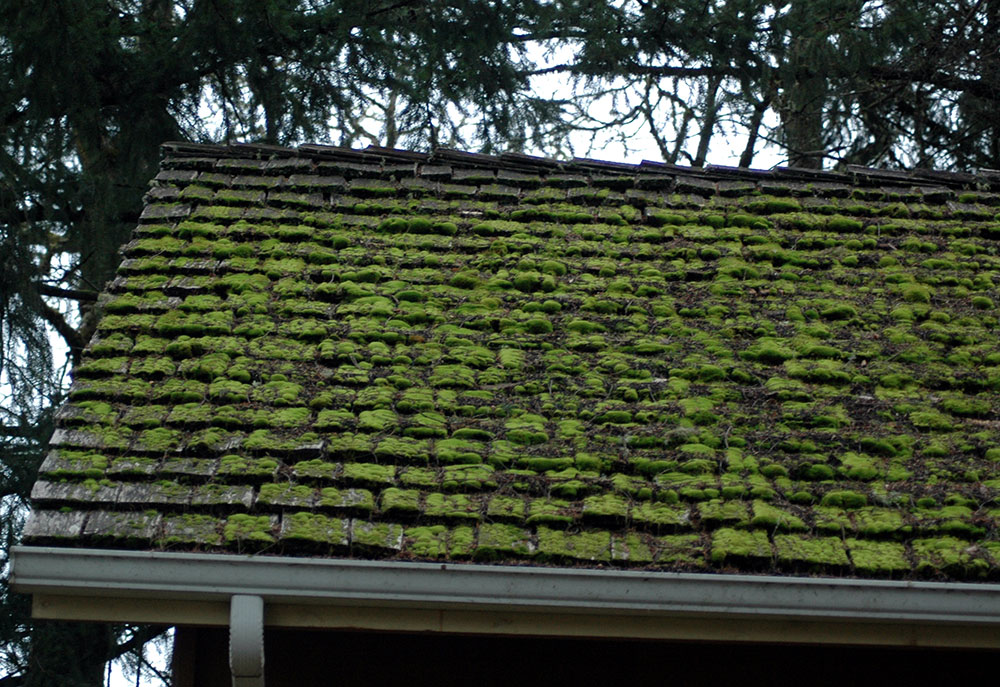 The plant begins as a thin, barely visible layer. But soon it will become a thick coat that grows between the joints of the tiles. Because moss is a plant that stays wet, it rots and cracks the surface where it is.

This destructive nature made it necessary to have several roof moss destroyers on the market. However, there are some techniques that we can use to naturally prevent them from growing. 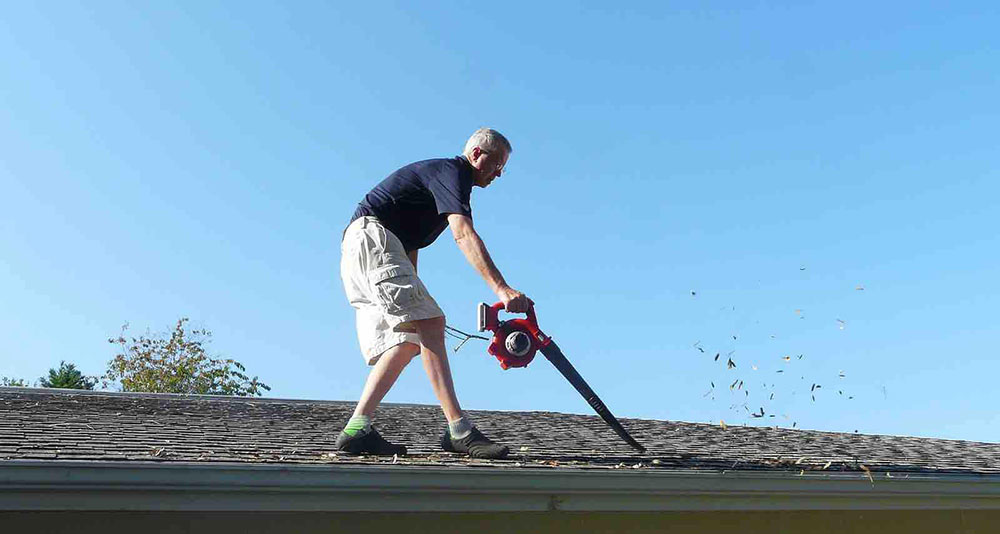 Some materials are toxic to moss, which we can use as a coating to prevent it from growing at all. You can use zinc sheets for an accessible project. Place them on both sides of the roof under the top ridge.

However, zinc does not prevent moss growth; it only reduces the likelihood of its occurrence. To completely avoid this, it is best to use copper sheets, but this is a much more expensive material. 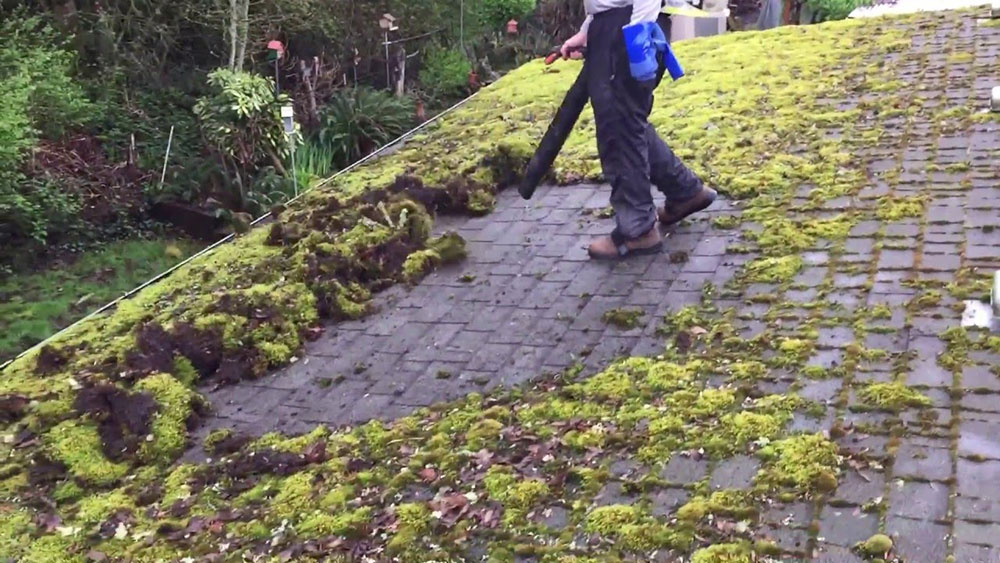 Before installing a sheet, you need to clean the ceiling. The best thing for the project is to buy complete metal rolls to reduce the number of sheets needed. Attach each piece with nails or ceiling screws.

One idea where you don’t have to change your home to prevent moss growth is to prune trees that create large shadows. You don’t have to remove them. Removing the greenest branches is enough for the sun to hit harder.

Avoid the accumulation of dirt on the roof, such as dry leaves and branches, as this encourages the growth of moss. With regular cleaning with a leaf blower, it is enough to keep it clean.

If it is too late to prevent the moss from appearing, it is time to act to eliminate it. If you don’t want to hire a specialist, you’re in luck, because with enough patience and care you can remove this intruder from your roof yourself. If you look in this guide for ways to naturally remove moss from the roof, you’ll be glad to know that there are several simple and efficient methods.

Brush deeply on your ceiling 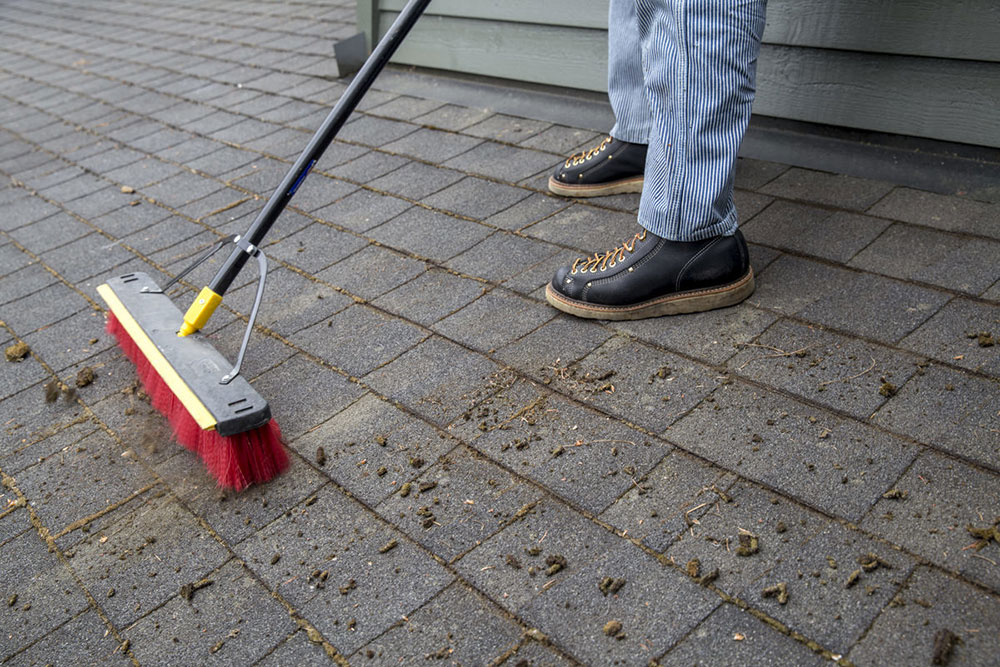 The first method is simply to remove the moss with a brush. It can be long-stemmed or you can use a broom.

It is best to avoid mounting on the roof as the moss is slippery. If possible, remove it from a ladder.

Some safety devices you need are rubber gloves and goggles. If you want to climb the roof, wear shoes with non-slip soles for extra grip, although it’s still advisable not to step on the moss. We also recommend that you use old clothes to work. 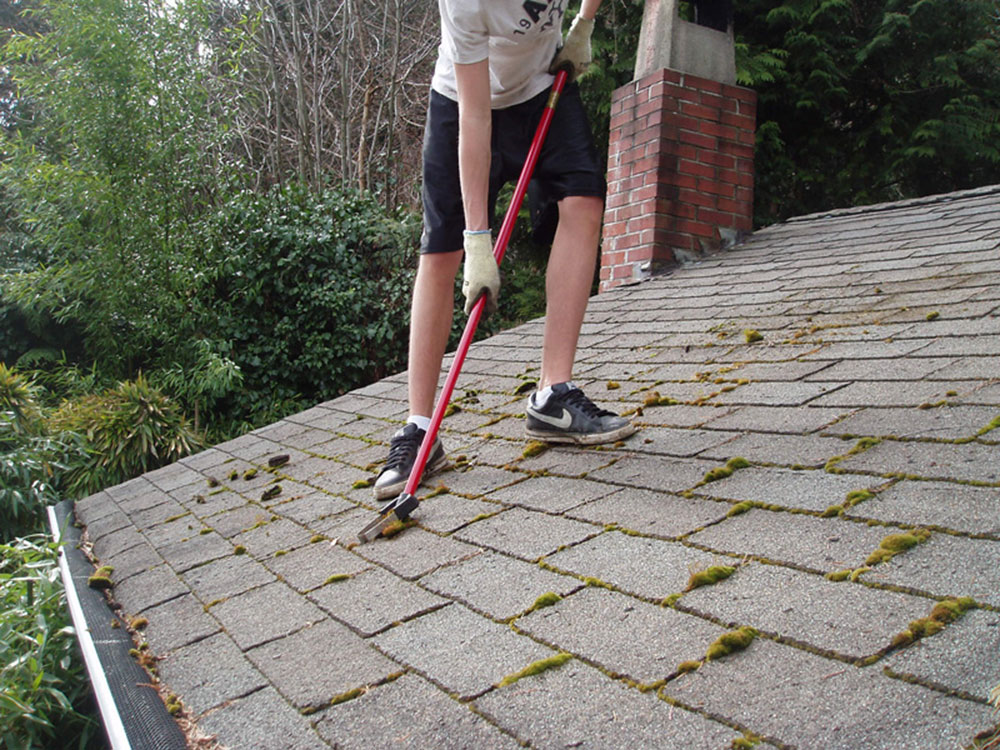 To simplify moss removal, spray the roof with water from above so that water flows into the sewage system and does not penetrate through the brick openings.

Rub the moss with the necessary force. The brush should be used from top to bottom so as not to damage the roof. Be careful not to brush too close to the eaves to avoid accidents.

If the condition of the roof structure is not very good, it is best to clean it by hand from a safe distance. Before walking on a section, check stability with a stick or by hand. 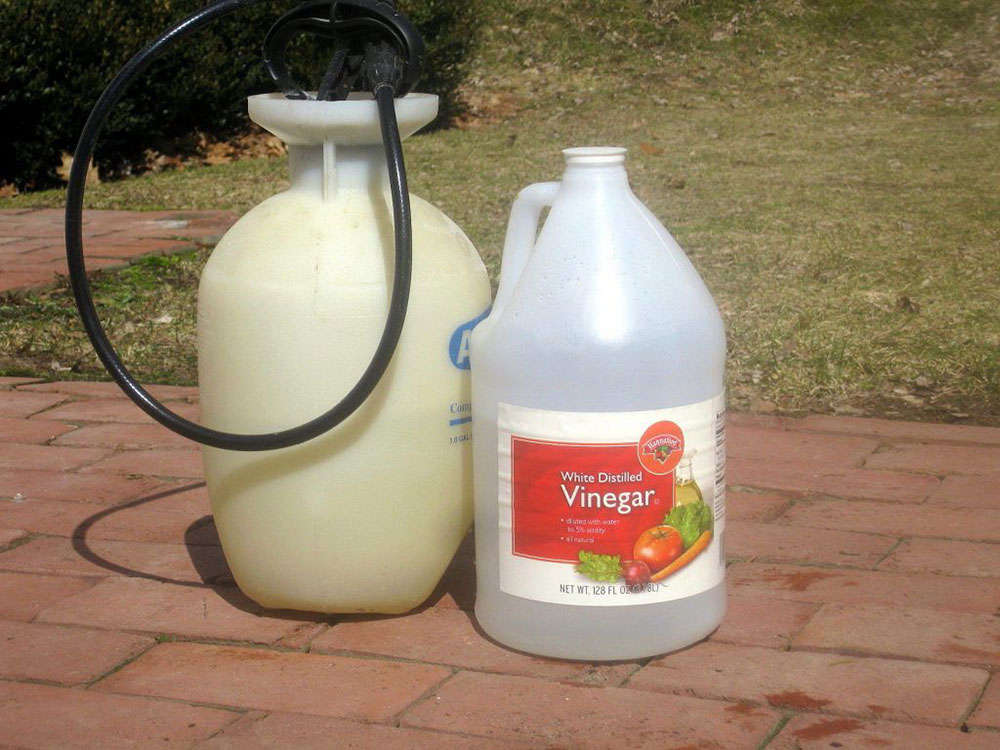 Vinegar works well as an abrasive for many jobs, including moss removal. We don’t need that much vinegar to make an effective remover. A mixture containing one part apple or white vinegar per nine parts water is sufficient.

Spray the solution with a sprayer so that you only apply what is necessary to remove the moss layer. Let the mixture stand for a few days or until the plant has dried.

Clean your roof with water after a few days to remove vinegar and moss residues.

How to remove moss from the roof naturally with baking soda 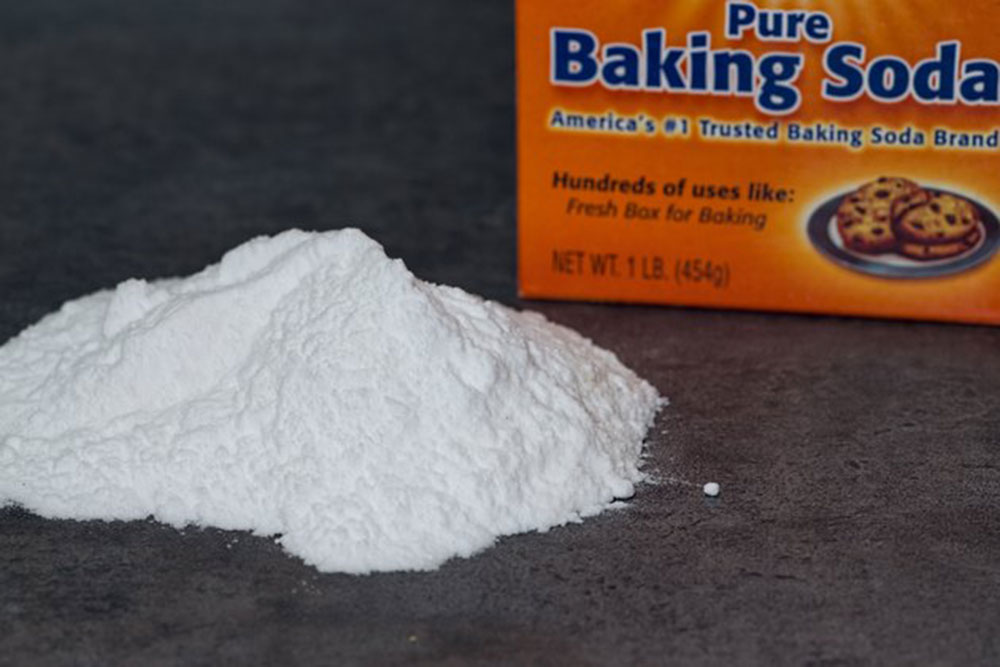 Baking soda is very similar to vinegar technology and allows you to keep your roof free of moss by acting as an abrasive.

Add 3 tablespoons of baking powder to 1 liter of water. Mix well so that it completely dissolves in the water and then pour into a sprayer. Apply a layer of the solution to the moss and in a few days it will dry out completely. 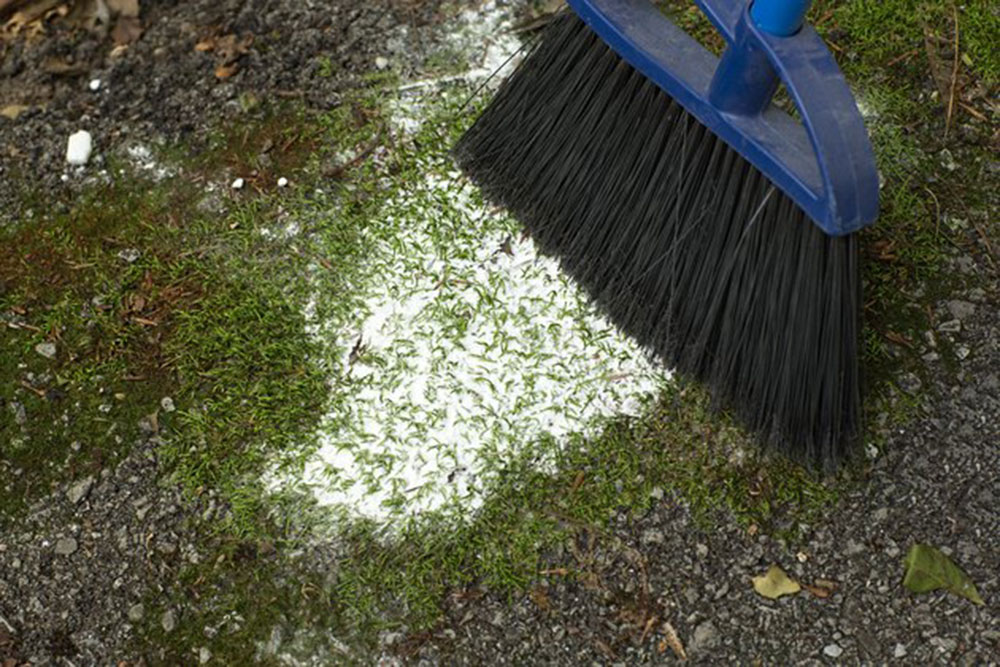 You should also clean your roof after the moss has dried. The advantage of using baking soda is that we can apply it to the roof as a protective layer once a year to prevent plant growth. 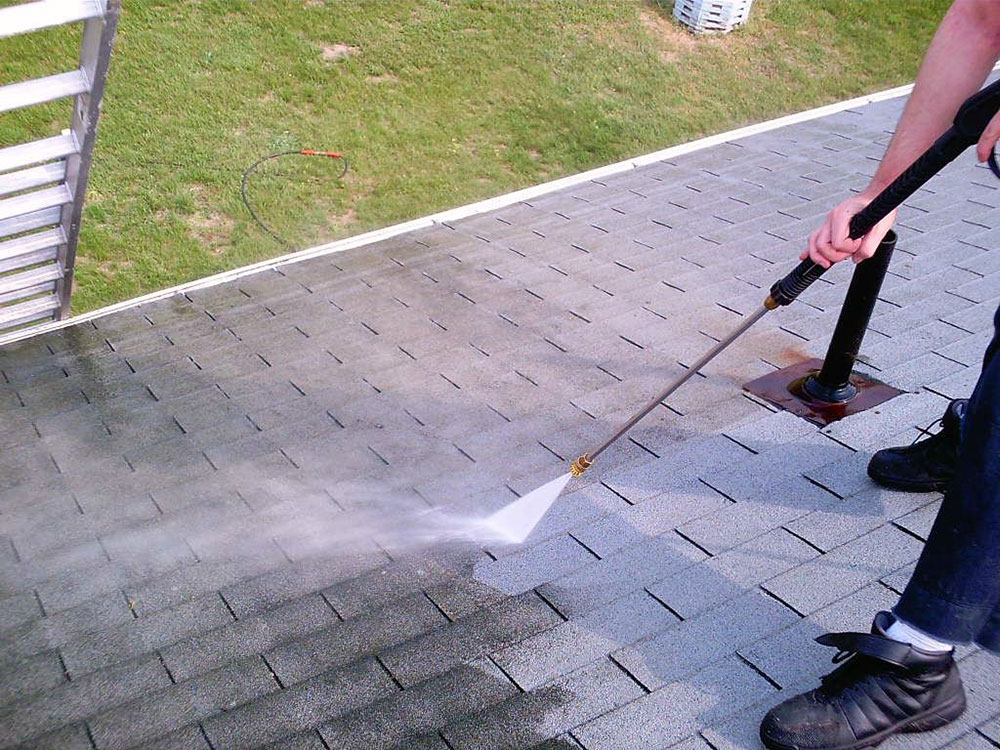 This is the most drastic option of all and the last one to consider when considering natural methods of moss removal. The problem with using a pressure washer is that it can severely damage our roof due to the high water pressure.

If our roof already has a significant crack, it is best to discard this option. If you choose to use it, you should apply the water from the top of the roof according to the direction of installation of the tiles. We also recommend using a low pressure level and separating the device from the ceiling as much as possible.

Removing moss from the roof – a maintenance job

Due to the properties of the moss, constant maintenance of the vulnerable areas is the best way to prevent growth.

Although moss doesn’t eat through the roots, they still stick to the surfaces. Like other plants, they can start lifting the constructions when they get out of control.

Even if it wasn’t our case, the moss is a plant with high humidity, so it will eventually rot the surface where it is.

Moss should be kept away from our homes for health and safety reasons. Even though many people consider it a decorative plant, we will have a serious problem if it is not checked at least once or twice a year.

If you’ve read this article about naturally removing moss from the roof, you should read this too:

Tags how to remove moss from roof naturally

Previous The best blinds: How to choose blinds that are suitable for your home
Next 5 Things to Consider Before Hiring Northern Virginia Roofing Services