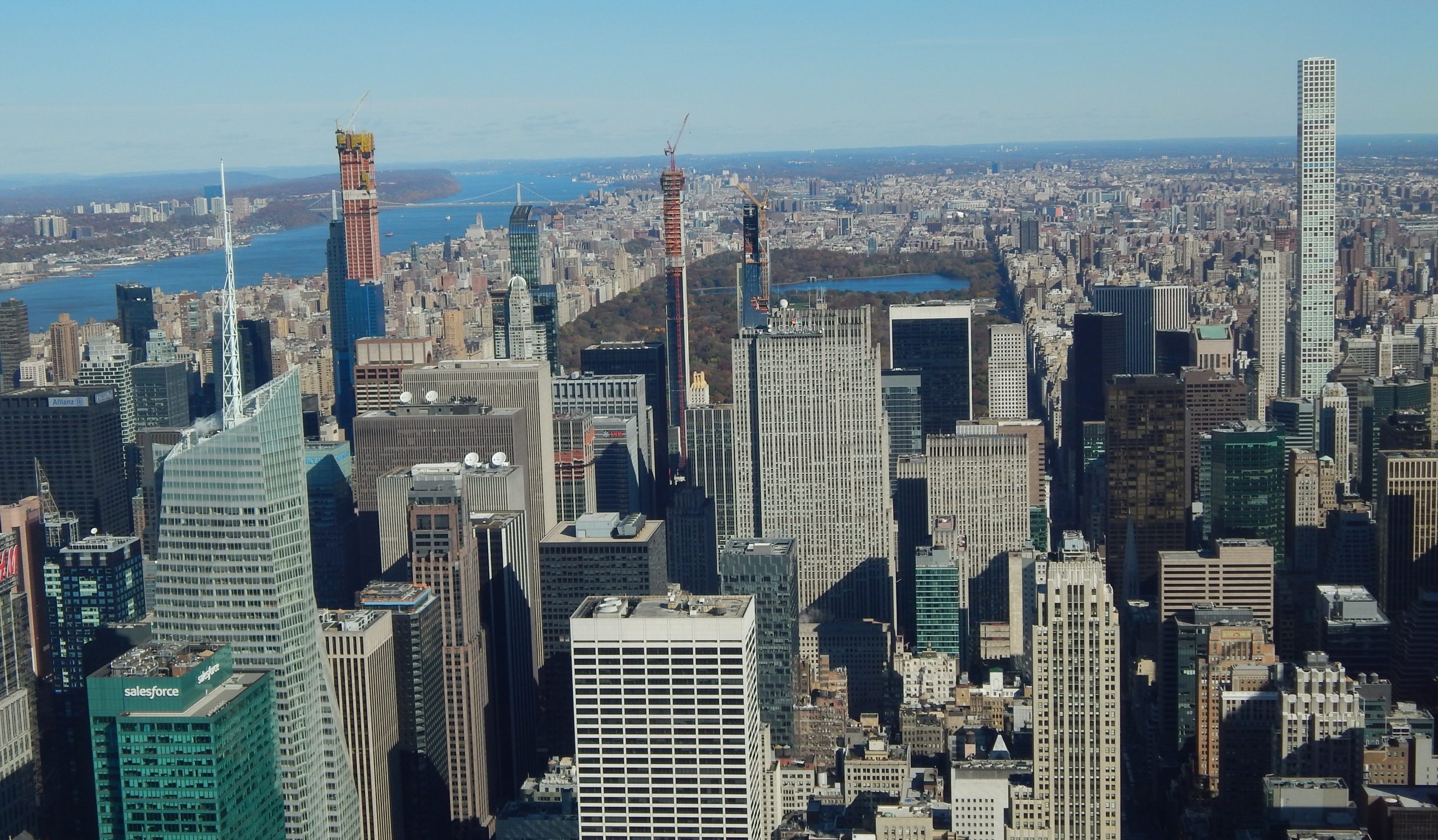 The most impressive New York skyscrapers

Do you consider New York skyscrapers to be incredible urban architecture? There are many who believe that skyscrapers are among the city’s greatest achievements. A century ago, designers aimed to build some of the tallest buildings. However, modern New York towers focus not only on height, but also on design, movement, and structure.

New York skyscrapers are very impressive. From the East River to the Hudson, there are many ways to enjoy the Manhattan skyline.

The Holy Trinity Church was 280 feet tall and was completed in 1846, a time before the building craze and competition to be the tallest of them all. Since then, there have been many New York buildings that have increased the number of New York skyscrapers and added their silhouettes to the New York skyline. New York is now a famous city of skyscrapers. 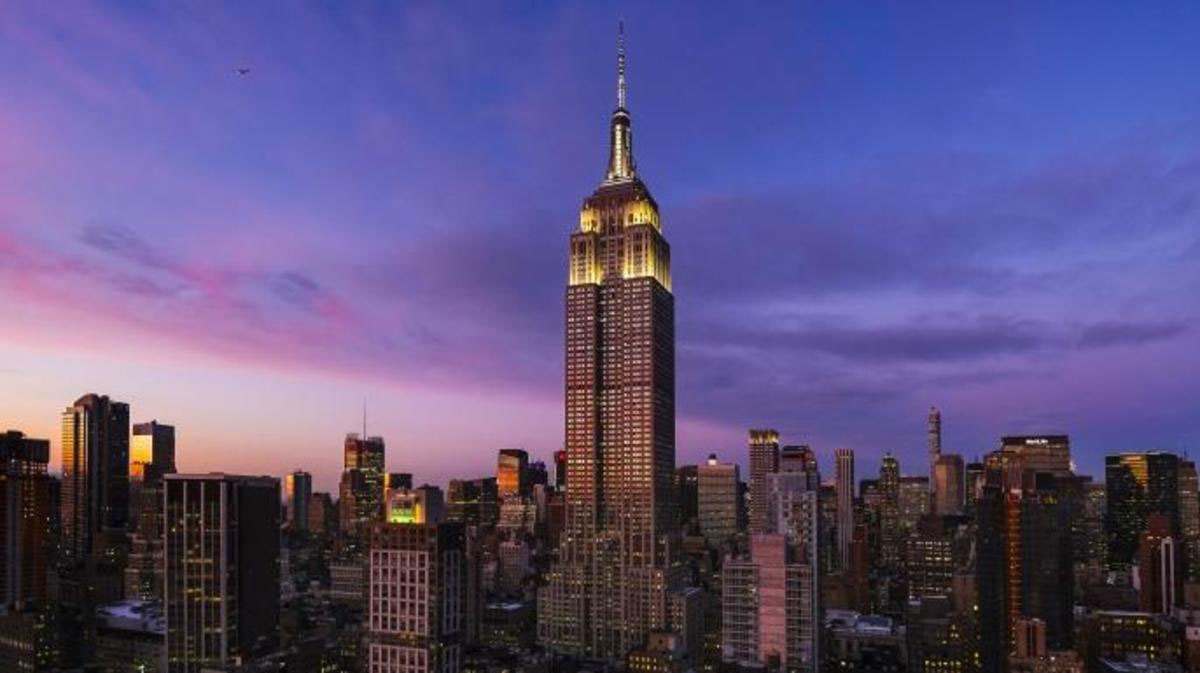 The Empire State Building was built during the Great Depression and was completed in 1931. It was the tallest New York building at the time and remained so for over 40 years. At the time of completion it was difficult to rent out and for a while it was known as the “Empty State Building”. The building was saved because it had a beautiful panoramic view of New York where visitors gathered to buy a ticket.

It’s still one of the most iconic buildings in New York, and visitors flock to the observation deck to take in the view. This New York building is also known for its neon lights, which change depending on the occasion, lighting up the sky every night. 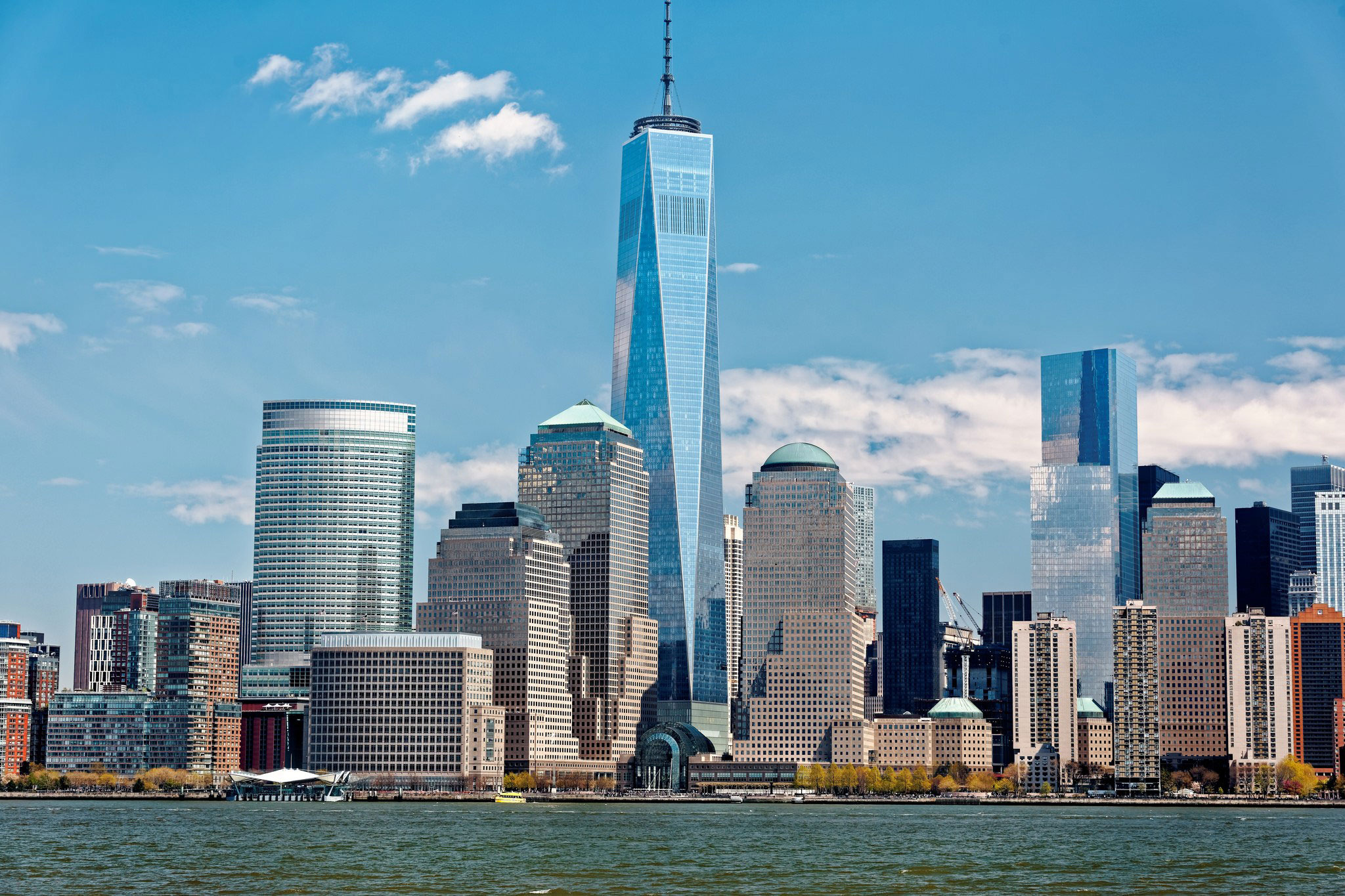 The One World Trade Center is the leading building in the new World Trade Center complex. The original twin towers were destroyed in a terrorist attack on September 11, 2001. This new building stands out from other New York skyscrapers as a symbol of strength and resilience. It has a glazed aesthetic and interior lights that have a chevron pattern. The building attracts millions of visitors every day. At night, the chevron pattern can reappearst the horizon.

The building is 1,776 tall, making it the tallest skyscraper in New York. It is a popular tourist destination, not only because of its altitude, but also because it is a memorial to those who lost their lives in the 9/11 attack. A symbol of grace emerges from the ashes. 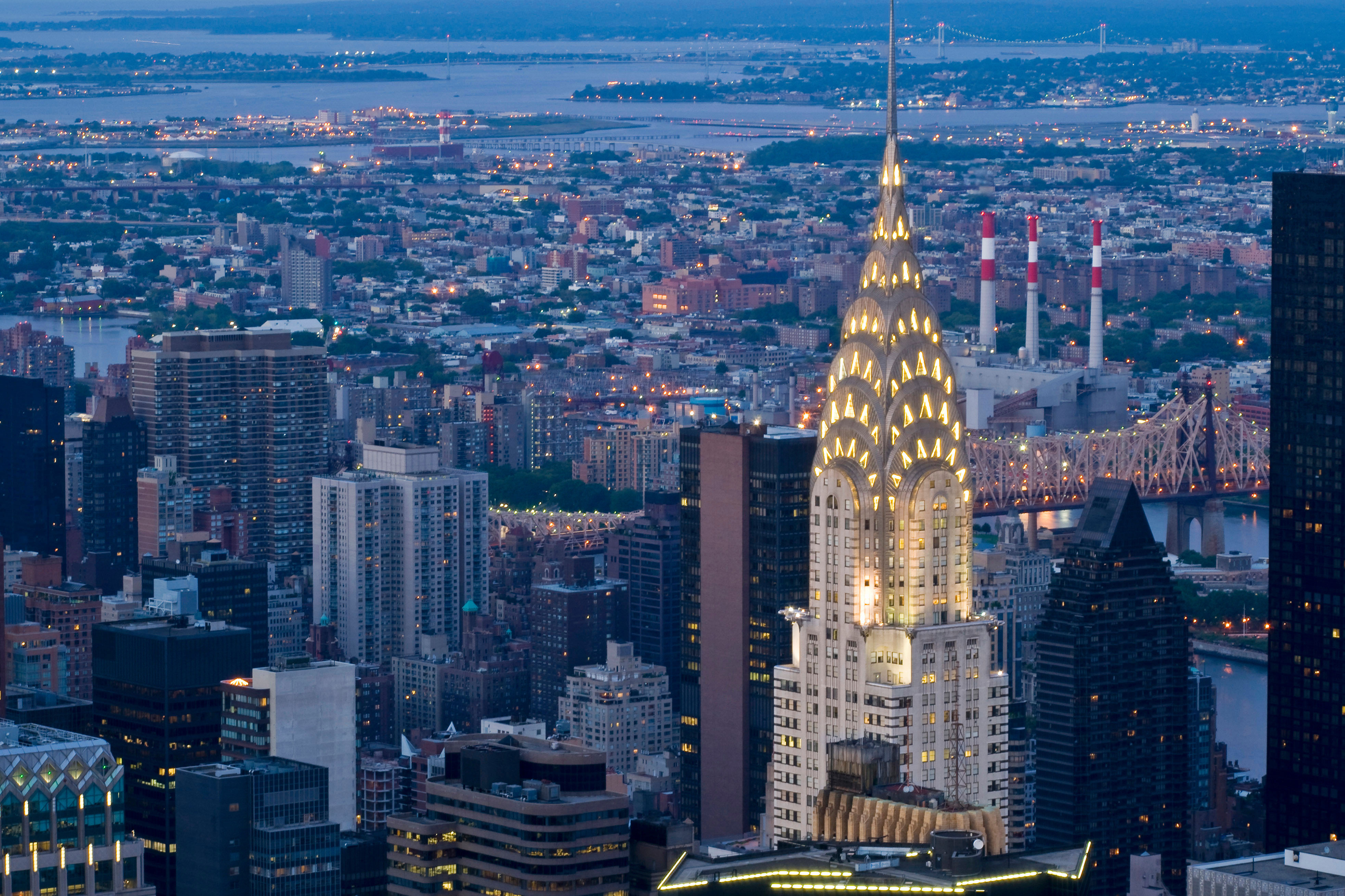 The Chrysler Building is an Art Deco style building that was built in the 1930s. At the time, not everyone appreciated the exquisite architecture and some even viewed it as unoriginal. Anyway, it. It is considered one of the landmarks of New York.

The Chrysler Building was once the tallest building in New York and was surpassed by the Empire State Building less than a year later. It had an observation deck that was open to the public until 1945 when it was closed to visitors.

40 Wall Street and the Chrysler Building once competed for New York’s tallest skyscraper in what was known as the “race to heaven”. Chrysler added a steel tower to its building and defeated 40 Wall Street in the final moments of construction. 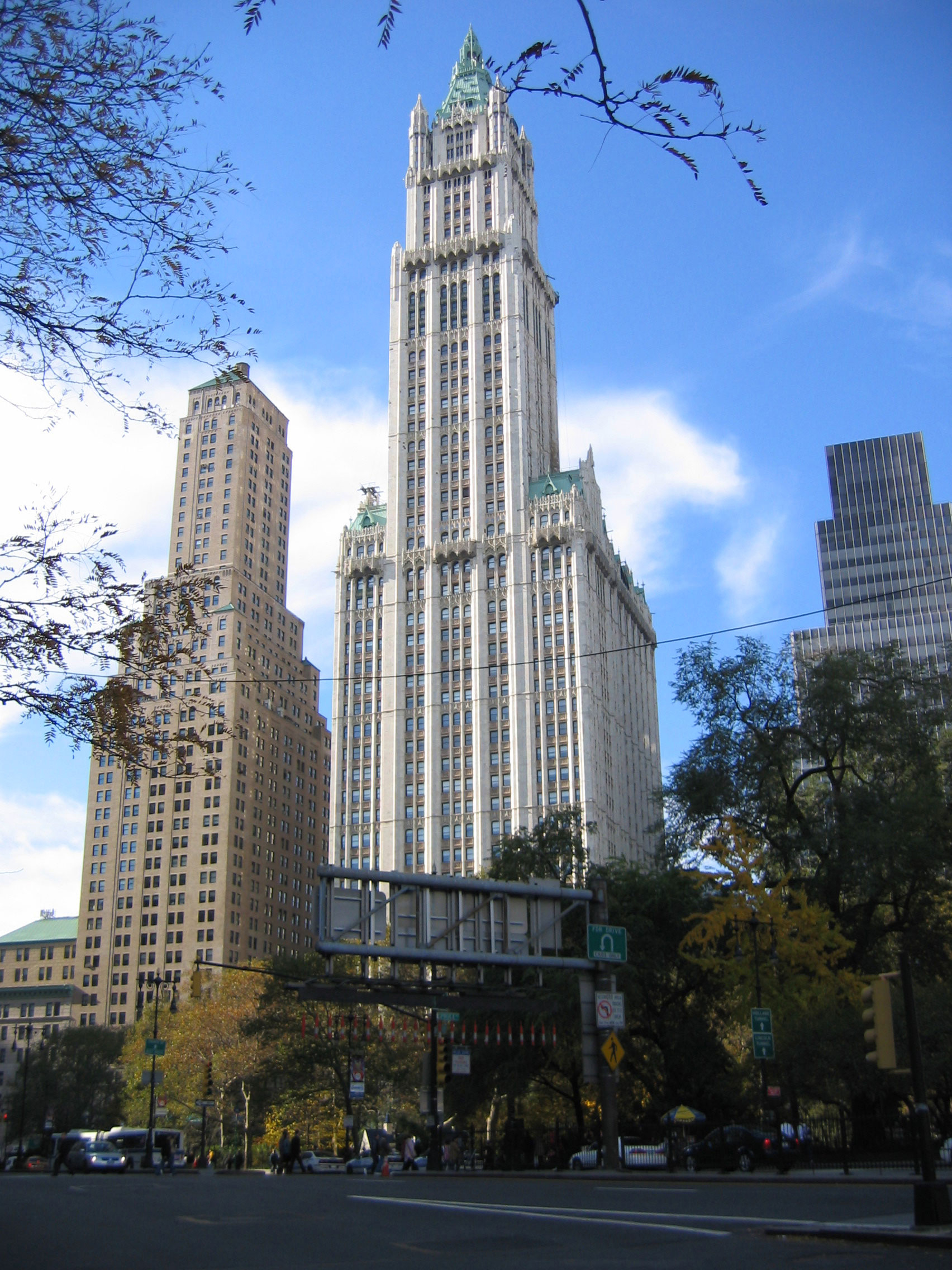 This New York building was designed by Cass Gilbert, a well-respected architect. It is Gothic in style and has 34 elevators and 57 floors. It is currently the 20th tallest of New York’s skyscrapers and the 53rd tallest building in the world.

The Woolworths building was built in the early 20th century when skyscrapers wanted to touch the sky. At that time the building was known as the “Cathedral of Commerce”.

Like the Empire State Building, the Woolworths Building has an observation deck that stayed open until 1941. The high speed elevators were excellent for the time. 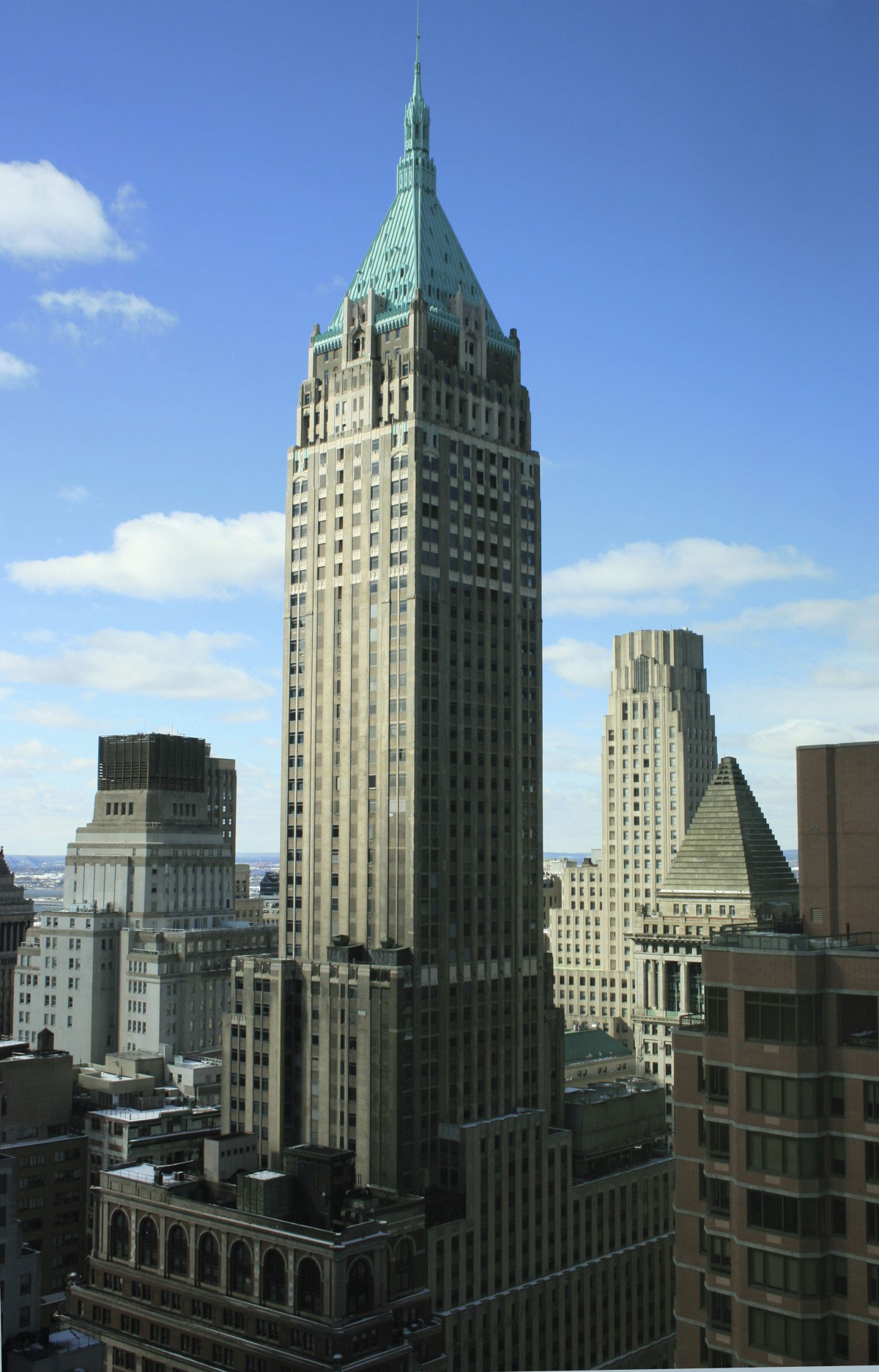 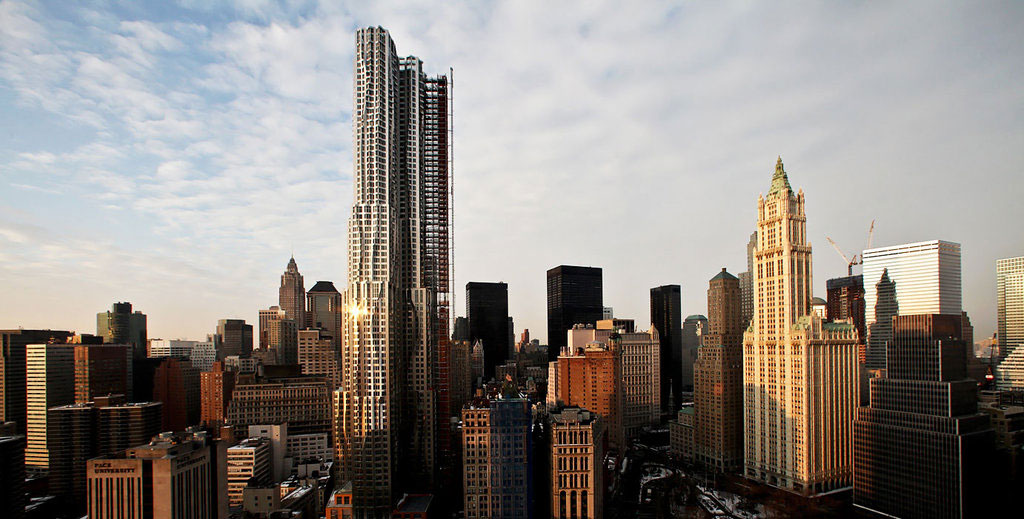 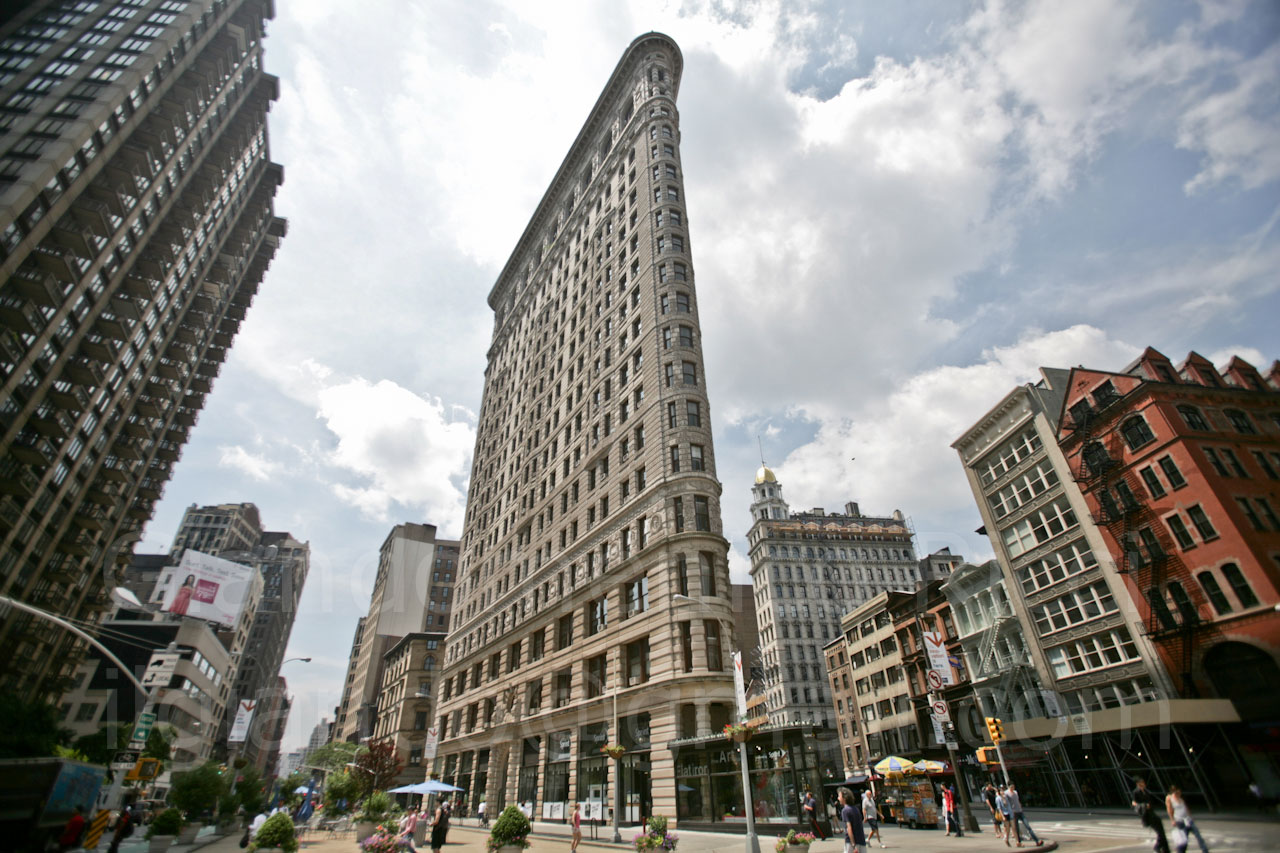 The Flatiron Building is one of the most famous skyscrapers in New York. The building was originally called the Fuller Building because it was built by and owned by George A Fuller. At the time the building was completed, it was Manhattan’s tallest skyscraper. It was also the first skyscraper in New York to be built from a steel frame.

The Flatiron building remains a commercial hub, although plans are being made to convert it into a luxury hotel. The building stood the test of time, although many locals believed when it was built that a gust of wind would knock it down. 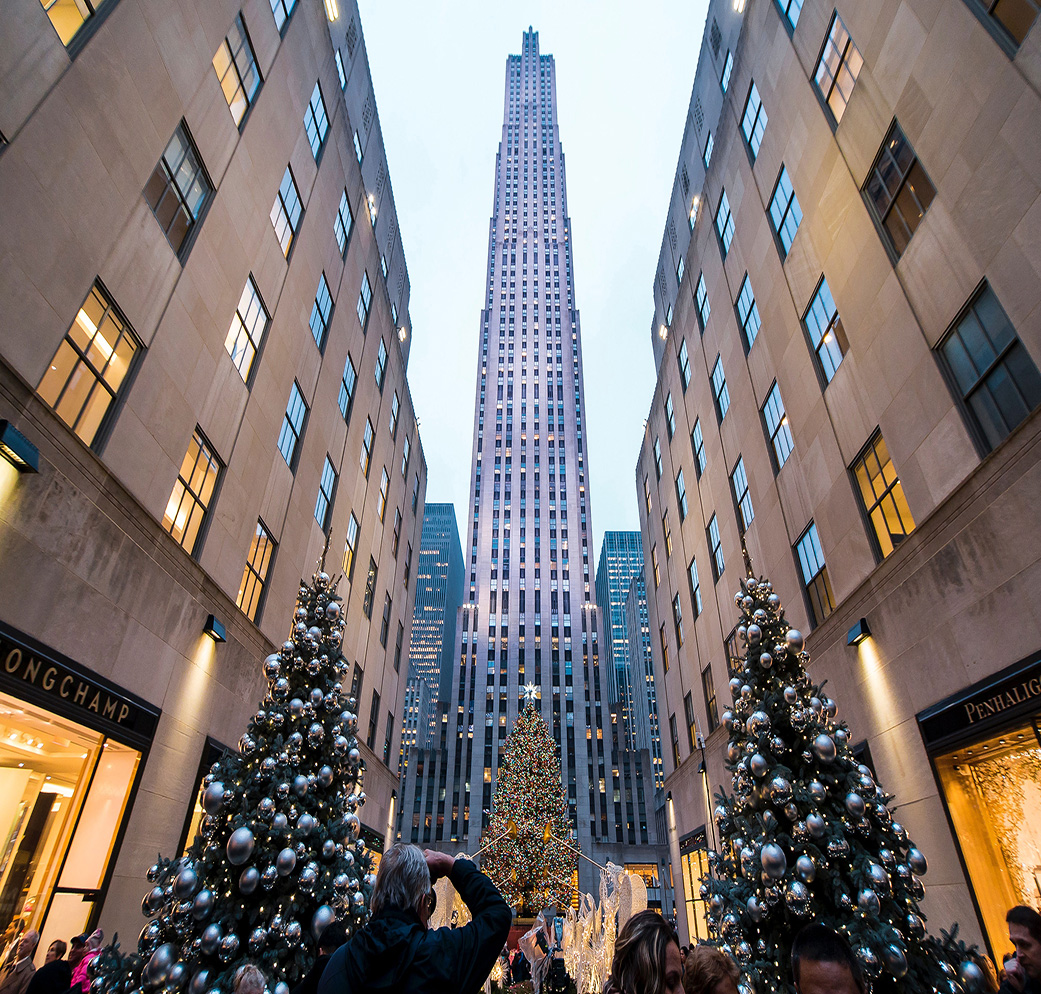 30 Rock is one of the most famous skyscrapers in Manhattan. It is part of the Rockefeller Center and was built by the famous American billionaire family of the same name. Rockefeller Plaza (30 Rock) has 19 buildings that span 4 city blocks.

Number 30 Rock is the tallest building and has 70 floors. It offers incredible views and its top deck, “Top of the Rock”, is on the 70th floor. From here you get a 360 degree view of Manhattan.

Rockefeller Plaza was built in the 1930s and reflects the art deco style of that time. It has beautiful murals and gorgeous decorations. At the entrance to the building you will see a beautiful Prometheus statue.

Hit the storm of life 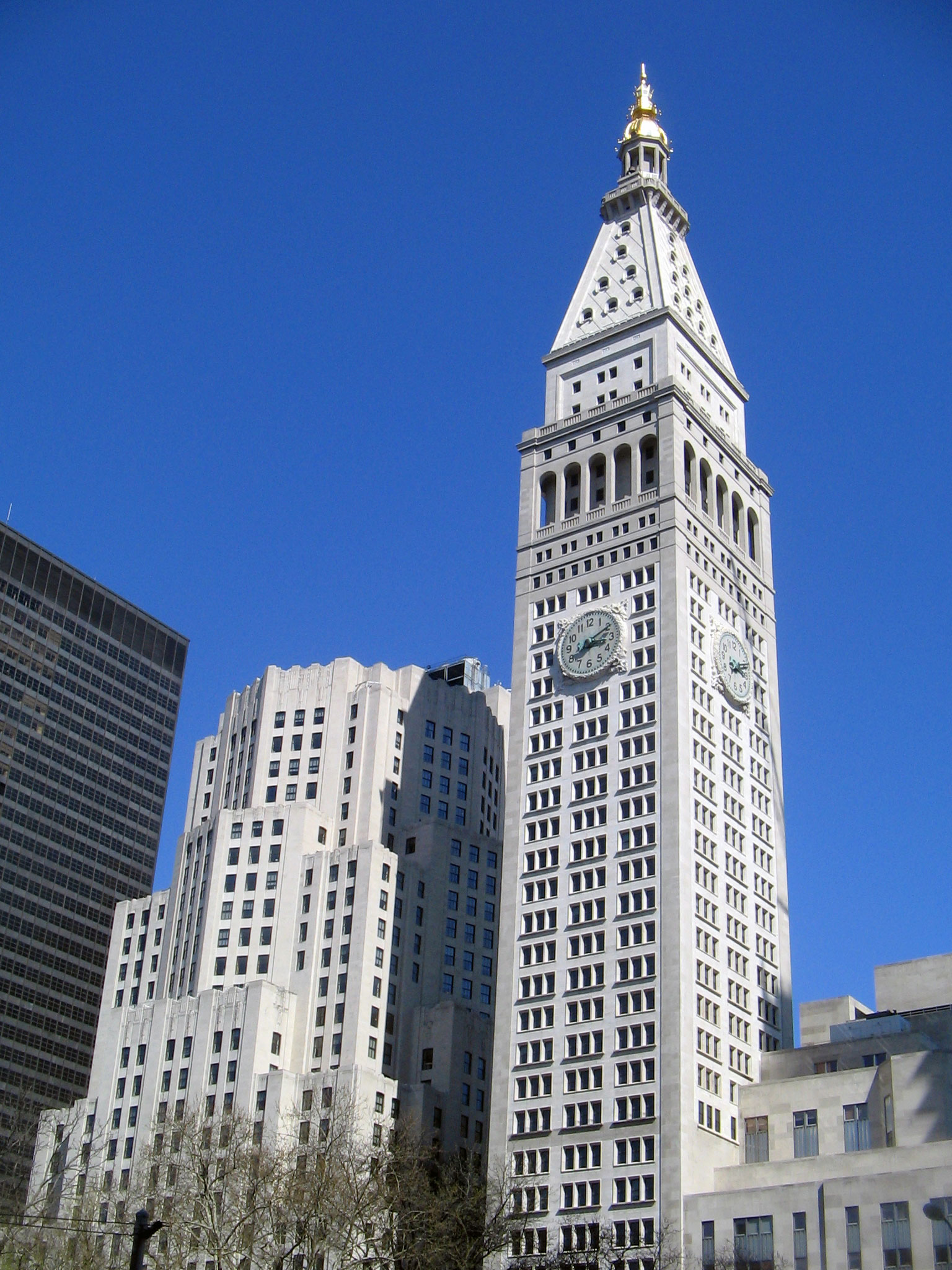 The Met Tower is located near the Flatiron building. These two New York skyscrapers are both cult objects. The Met building has been declared a historical landmark.

The beautiful centerpiece of the beautiful Met building is a large clock on the top. This clock was the largest in the world, and not even the world-famous Big Ben was the same size. This New York tower has its roots in Italy as it was inspired by the Campanile tower in Venice. 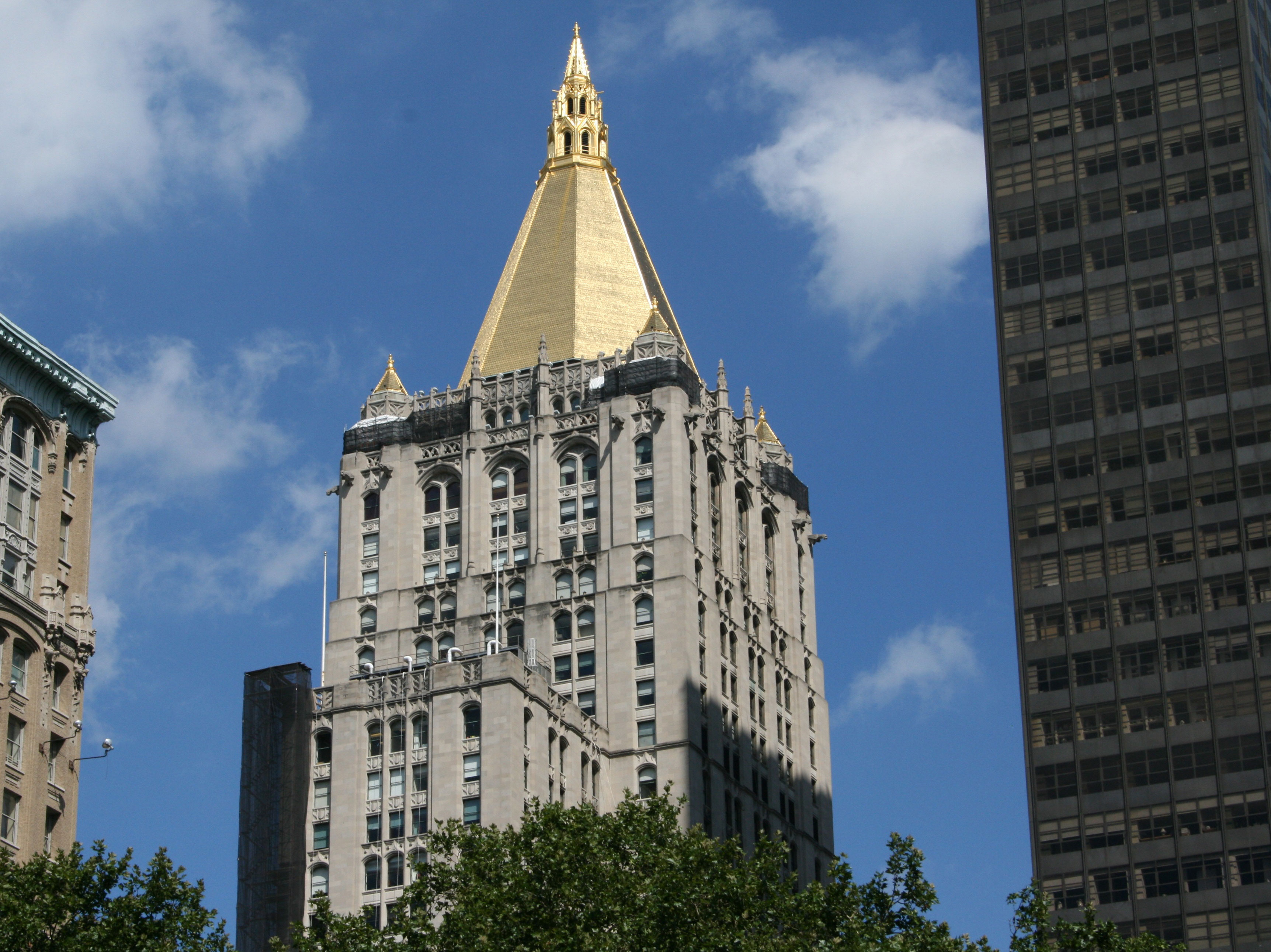 This beautiful New York building is 40 stories high and occupies an entire block. Designed by Cass Gilbert, it is known for its guilty roof made of 25,000 gold leaf tiles.

The building is one of the New York City skyscrapers, which has been declared a National Historic Landmark. You can learn more about the history of this beautiful building at the visitor center, which is located in the main lobby 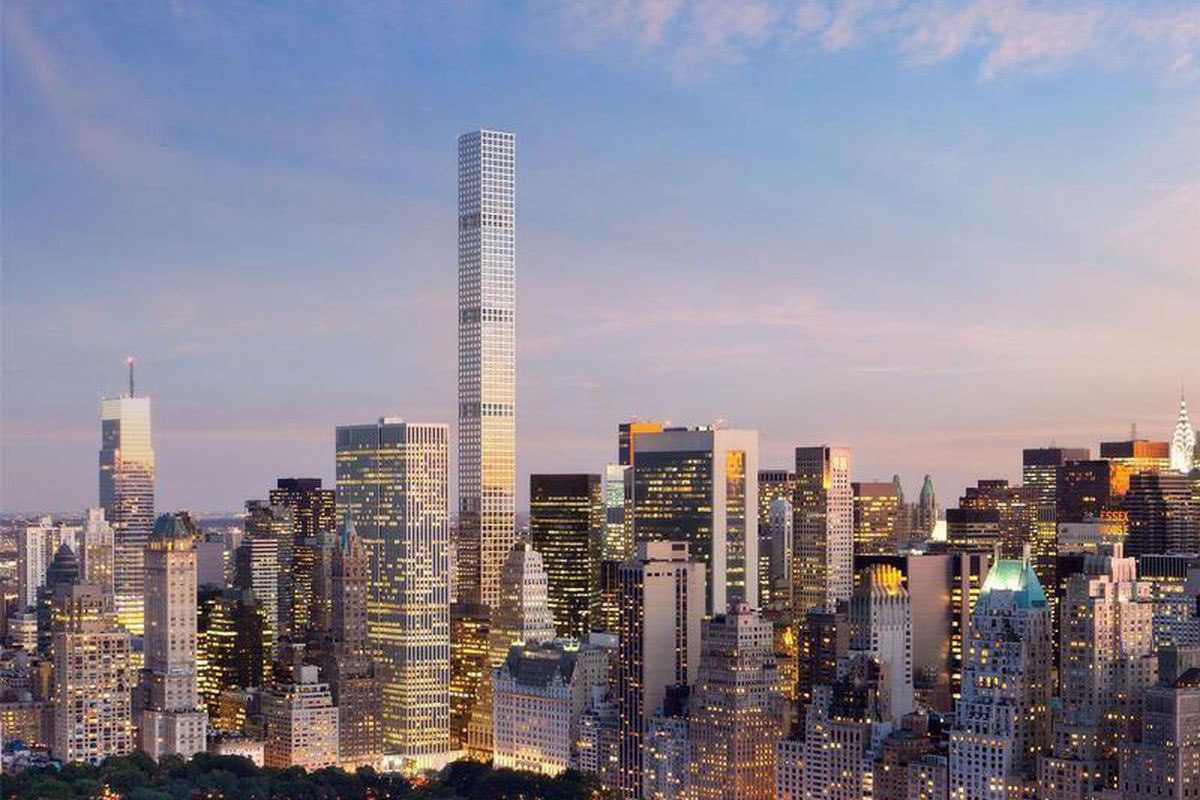 At 425 m, 432 Park Avenue must be one of the most impressive buildings in New York. It overlooks Central Park and is so luxurious that its penthouse apartments are being offered at prices that would astound even millionaires.

Although the high prices mean that full occupancy may be difficult to achieve, the architecture has caused a stir around the world. This New York skyscraper, completed in 2015, is currently the tallest residential building in the world.

If you enjoyed reading this article on the New York skyscraper, you should read this too: