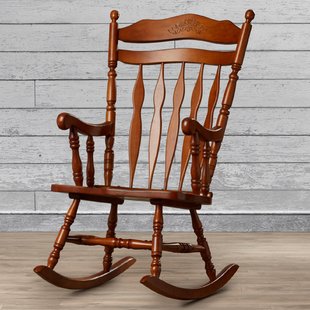 Different forms of a rocking chair

Everyone likes the relaxing feeling you get on a rocking chair, but majority of the times people end up purchasing a rocking chair which appears quite old. The main reason behind this is the lack of knowledge with respect to the innovative designs which are getting popular day by day. Creative as well as new designs, which are much more comfortable and flexible, are developed by the craftsmen.

Following are few rocking chairs which can be suitable for décor of any type:

It just rocks back and forth; the rounded surface is responsible for supporting such a kind of movement. The main advantages of such a traditional rocker are its efficiency in terms of cost and durability. The simple design ensures the presence of mechanisms which are less complex in nature. Minimum breakage can be observed due to the presence of few moving parts moving. The rigidity of the design is its only disadvantage.

This kind of a design utilizes an array of levers and pivots to rock back and forth but on a surface which is flat instead of a curved one. Less space is taken up by this kind of a motion when compared to the traditional ones. Therefore, majority of the time, gliders are considered highly comfortable by several individuals. However, the risk of breakage is quite high due to high number of moving parts and also due to the presence of complex mechanisms.

The motion is this kind of a rocker is just like the one in case of a traditional rocking chair. The one and only difference between them is in the fabrication. In case of the spring rockers, the rocking motion is obtained by the mounted springs. Such springs are stored inside a box, placed at the base of your chair, instead of being left open to create problems pets and kids. The spring rockers are durable and economical when compared to other gliders.

The spring rockers as well as the gliders have swivel mechanisms just like the ones which are supported commonly in the chairs used in the office. This implies that the individual who is using these will have flexibility as well as high comfort. Despite the complex mechanism, the implementation of the same is highly expensive. In addition, chances of breakage increase with the complexity of the product in the product.