Home / Decoration / The different types of stairs you should know 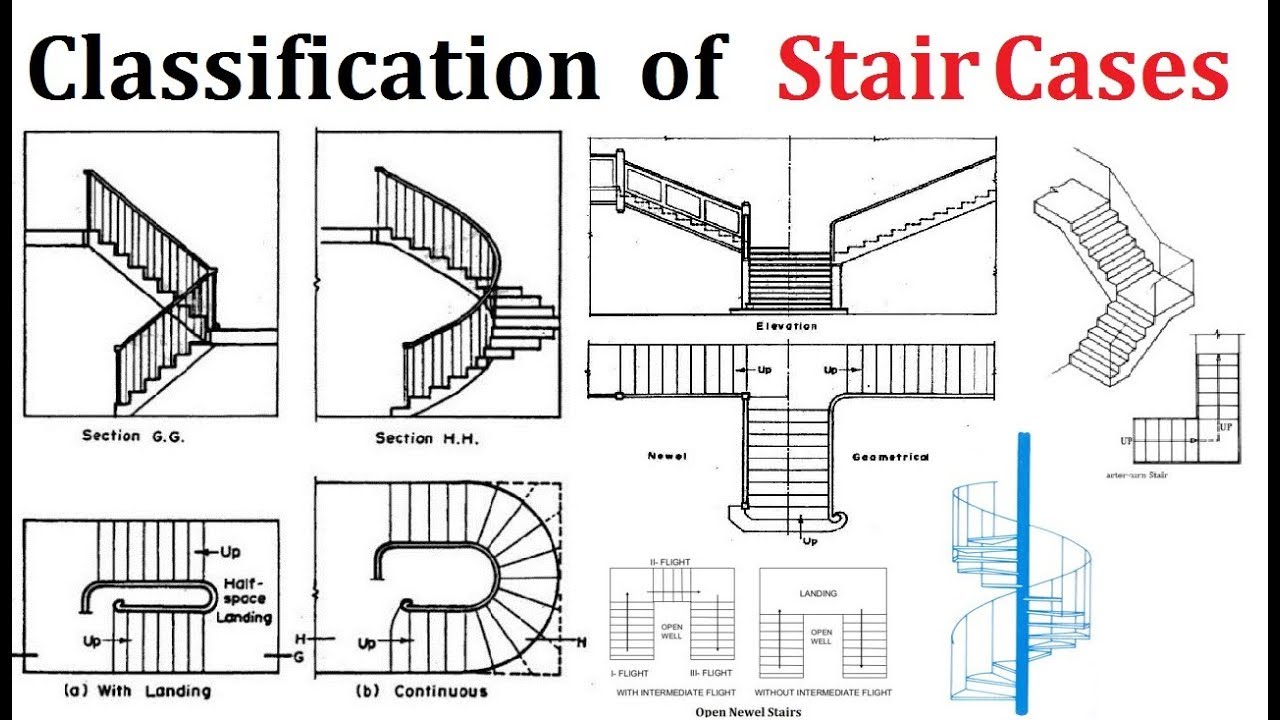 The different types of stairs you should know

If a building has more than one floor, it also contains stairs. Because of their functionality, these have become an essential architectural element. The good thing is that, as with architectural styles, you can break everyday life with many types of stairs.

Depending on the structure, some stairs are much better for our home or business. These can not only adapt to the needs of the users, but can also be visually attractive

Choosing the right ladder can be difficult even for an architect. Everyone takes a variable place and has different costs. Today, however, we present a guide that will help you choose between the different types of stairs available and adapt them to your home. 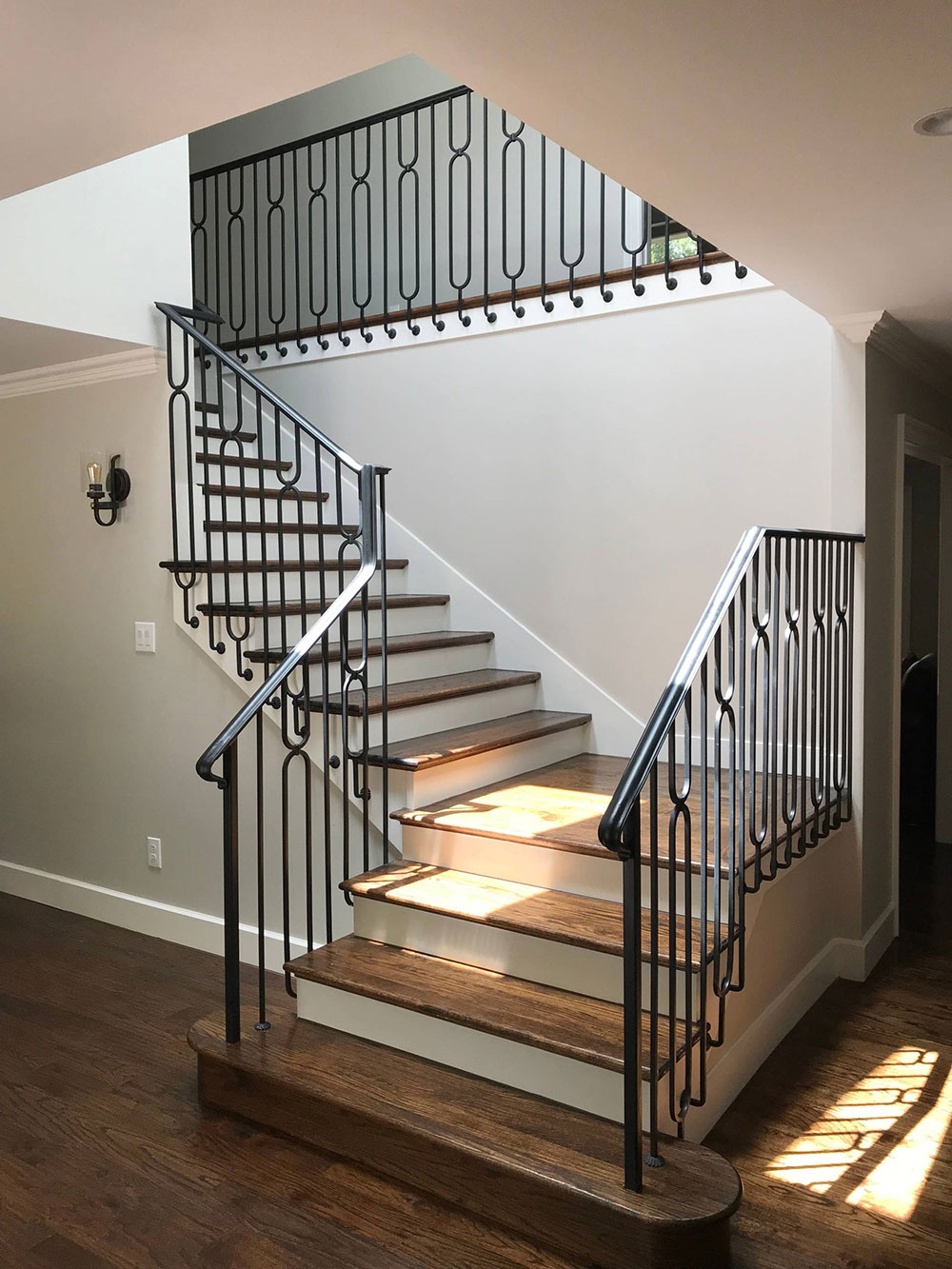 A staircase is an element with which we can walk between the different floors or levels of a structure.

There are two types of stairs: ladders that are built to save space and consist of horizontal bars in which we have to stand with our feet and hands to use them; and stairs with steps that are stacked diagonally so we can easily walk on them.

Another common name for the entire structure, including the handrails, is the staircase.

The types of stairs

As already mentioned, the stairs have the main function of connecting two levels to move between them. However, they can have multiple designs that match the space available and the visual style of our home.

Some of the elements that can be changed on the stairs include the construction and type of structural support, the materials to cover them, and the style of the tread, nose and riser.

The spiral staircase – save space 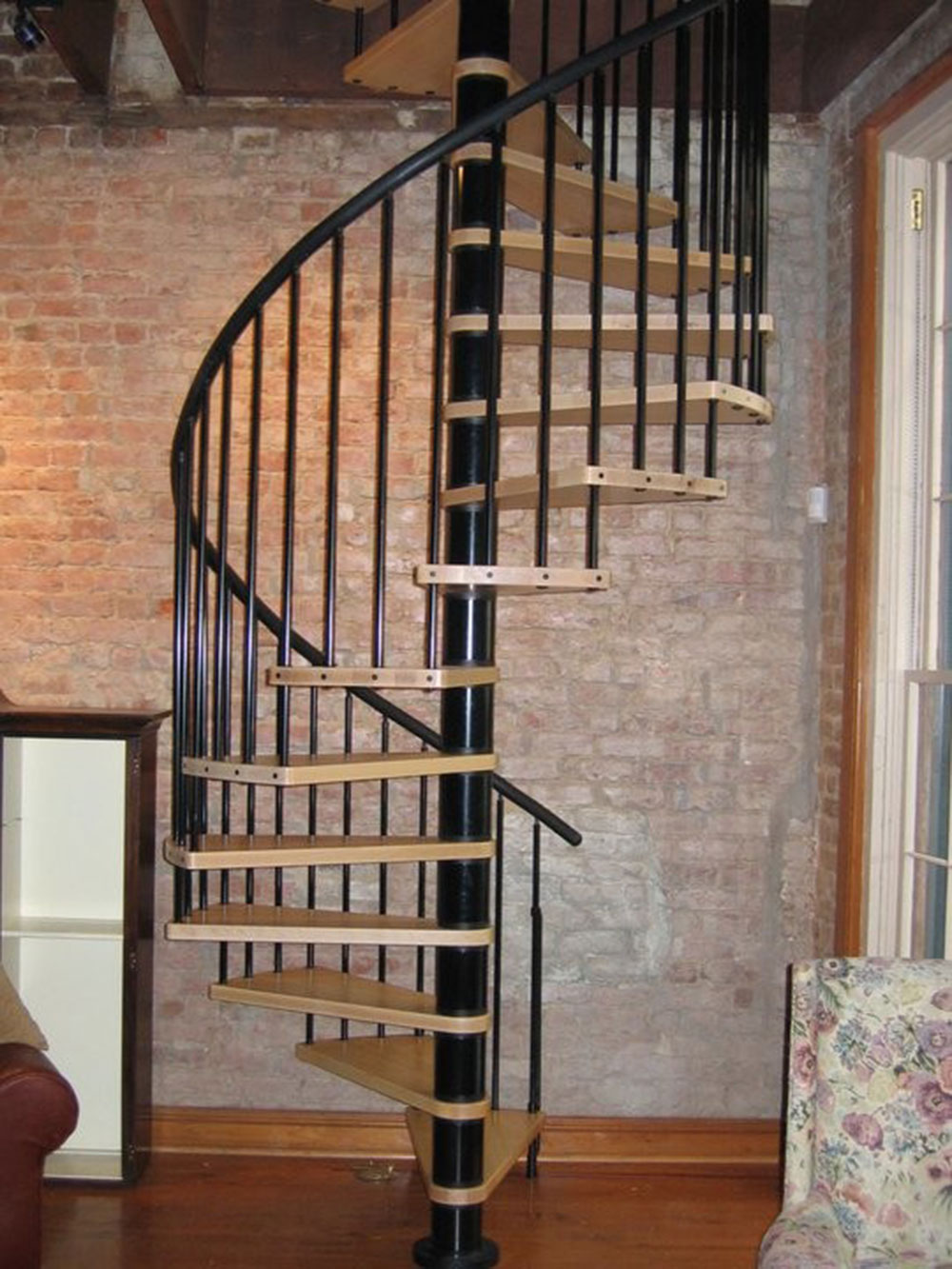 Spiral stairs are one of the most popular types of stairs by designers when there is not much space to build.

The ladder distributes each of its steps in a circle around a central axis without separating far from it, which means that the climbing is so far that the minimum height that allows people to pass is reached.

The space it occupies depends solely on the diameter of the steps and does not require large horizontal clearances for its construction. Because of the practical and small design, these stairs are often used in minimalist houses. 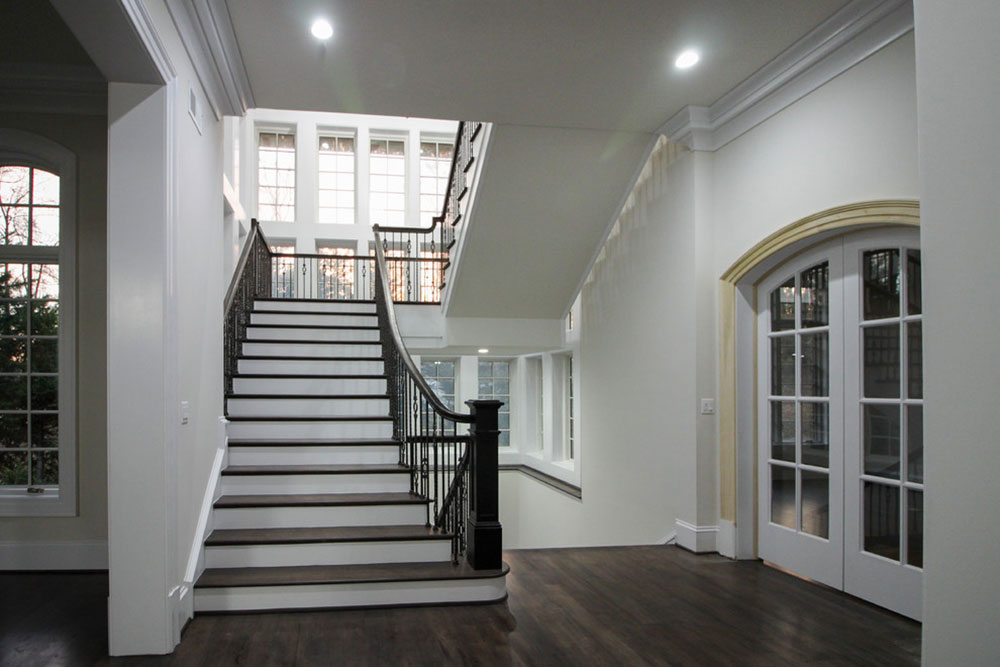 The straight staircase is the most basic stair design of all. As the name suggests, the first and last steps are aligned in a straight line.

A good number of steps are usually required so that the ladder is not steep. To reduce user fatigue, in the middle of the stairs (sometimes every third, depending on the distance) there is a rest with the same width of the steps.

Although these stairs can be very elegant and allow a unique customization, they have the negative point that a long distance is required to locate them. The good thing is that as soon as the steps reach a height of 1.90 meters, the lower room can be used to build additional rooms such as cupboards and bathrooms. 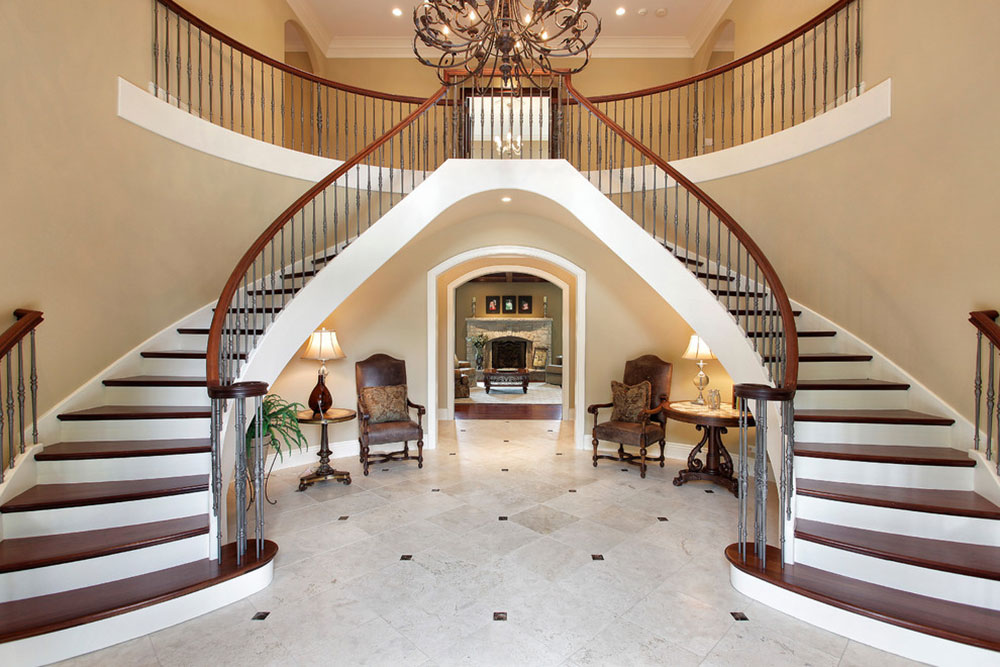 You have probably seen her in a castle, villa or fairy tale. The arched stairs are those whose steps are wedge-shaped, but this distance is so small that when connected they form a kind of arch that you can easily walk on.

The curved staircase is perfect as a central element in large rooms and lounges. It doesn’t necessarily have to be attached to a wall so you can use the remaining space from either side.

Like straight stairs, these require a lot of space for their installation and are even more complicated because they have the arch, because a measure of the width must be taken into account and in which direction the first step ends. 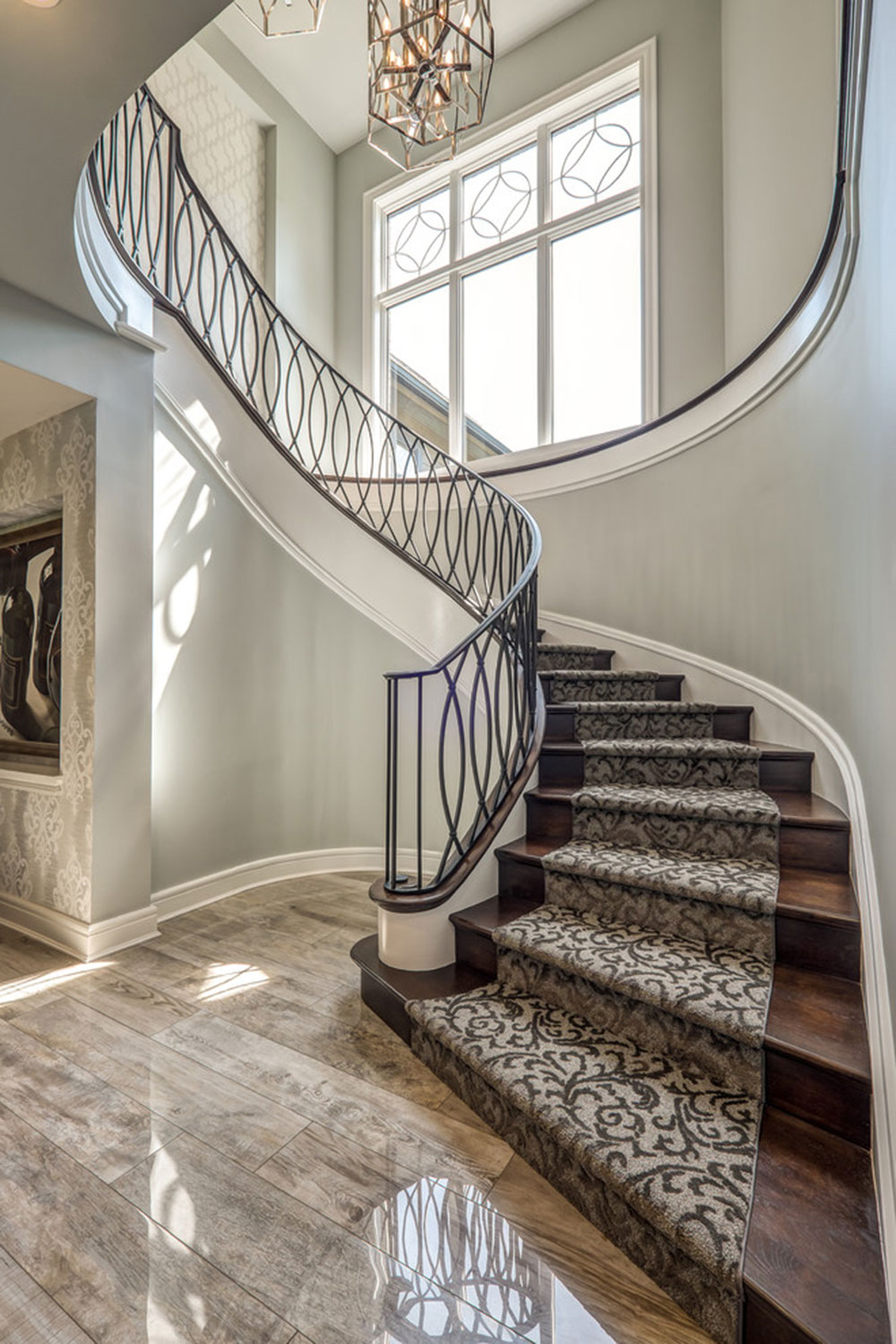 Although a spiral staircase (also called spiral) is very similar, it does not have a physical spine that supports the rungs to the axis. In contrast, these are located along two stringers, each with a different diameter, wound around the central axis.

Spiral staircases can stay in the middle of the route and cannot stop rotating 360 degrees when they reach the last step. Due to their nature, they take up more space than spiral staircases and require a stronger structure to support themselves.

Such stairs are usually built in art galleries or avant-garde houses. 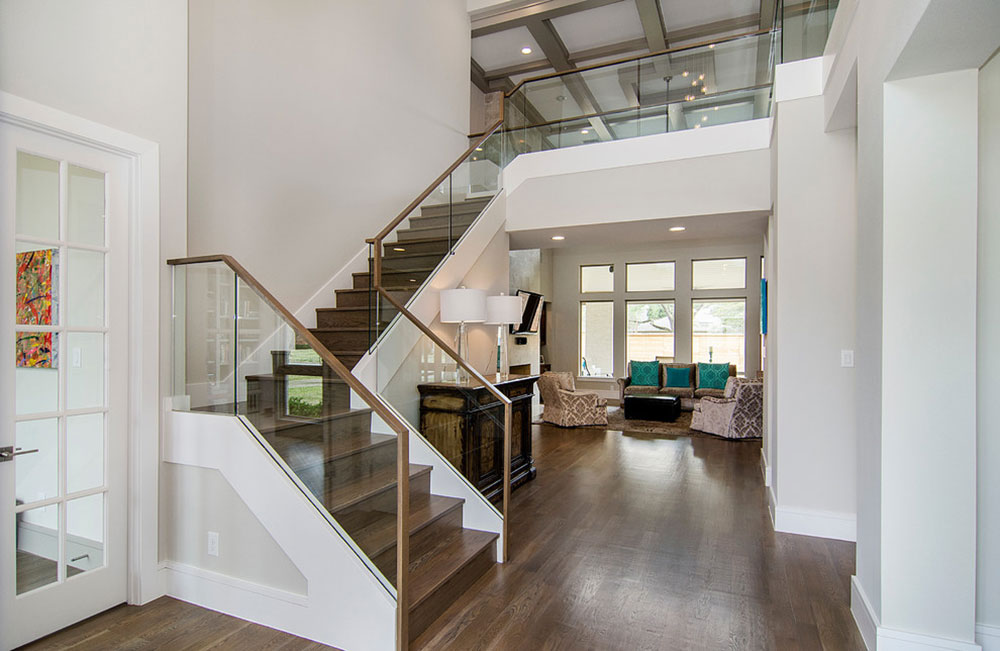 If there is not enough space to build a straight staircase, you can make a turn at any time. If the deviation is 90 degrees, we face an L-shaped staircase or a quarter staircase.

This is the best option if you are building the stairs in a corner. It has good support and allows you to create a small space under the second half of the stairs (which comes after the rest). In addition, these stairs generally do not allow you to see rooms or halls on the upper floor.

There is a variant called Winder Stairs that keeps the L shape, but instead of taking a break in the middle of the path, it implements wedge or triangle steps to maintain the continuity of the design.

Changing stairs are not as popular as their counterparts and are more common in old houses. Although architects of modern styles currently use them more often, they still take the position of an “additional staircase” in houses. 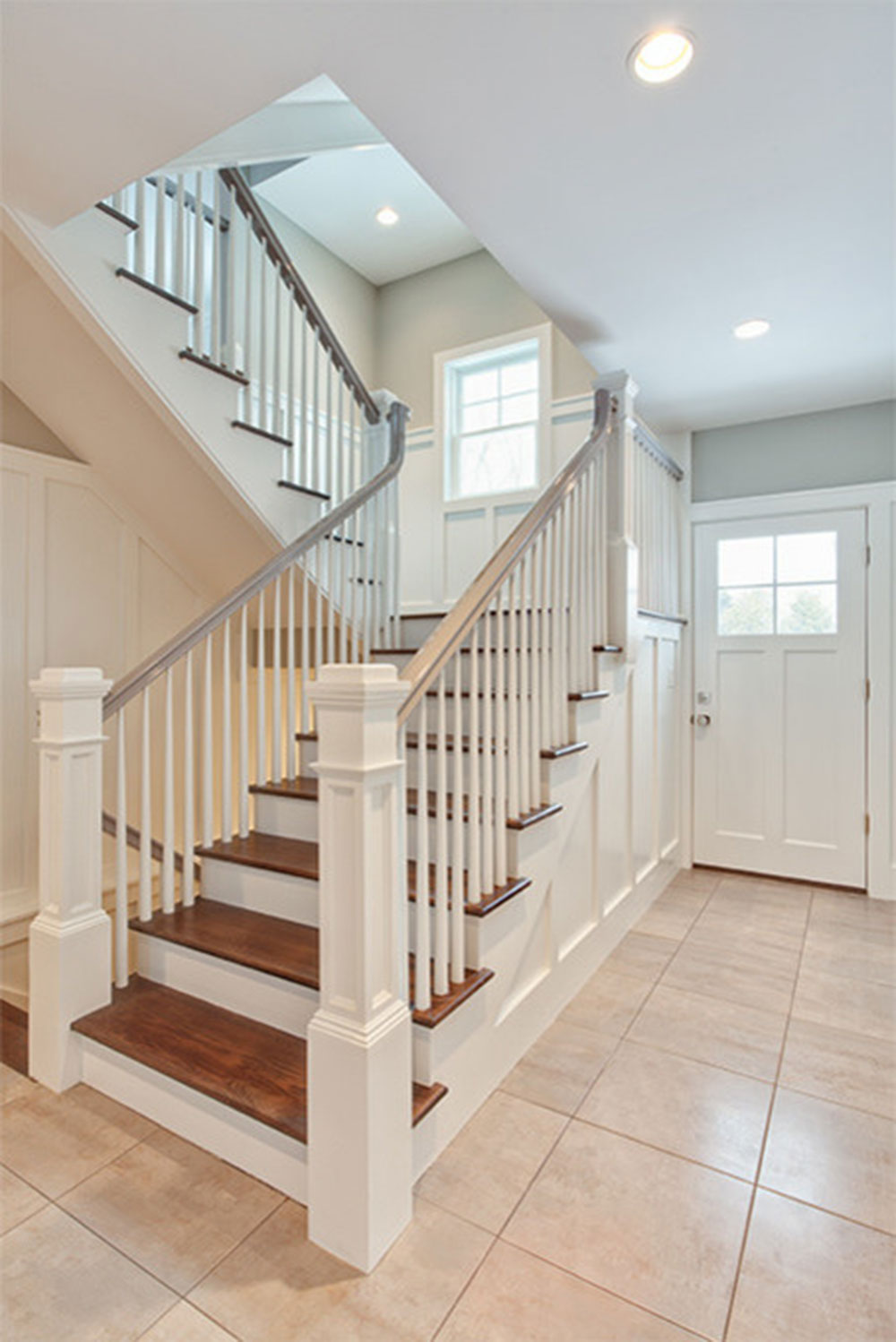 This staircase also lives up to its name by showing a 180-degree curve in the middle of its path. This construction takes up half the length of a straight staircase, but requires at least twice the width to take the curve.

This style is also called 2/4 and has multiple configurations depending on the taste of each person. Some decide to create a wider edition to leave an opening between the two halves of the stairs. Others prefer to create an open staircase that doesn’t use railings. Finally, there are those who, instead of resting in the curve, install wedge-shaped or triangular steps. 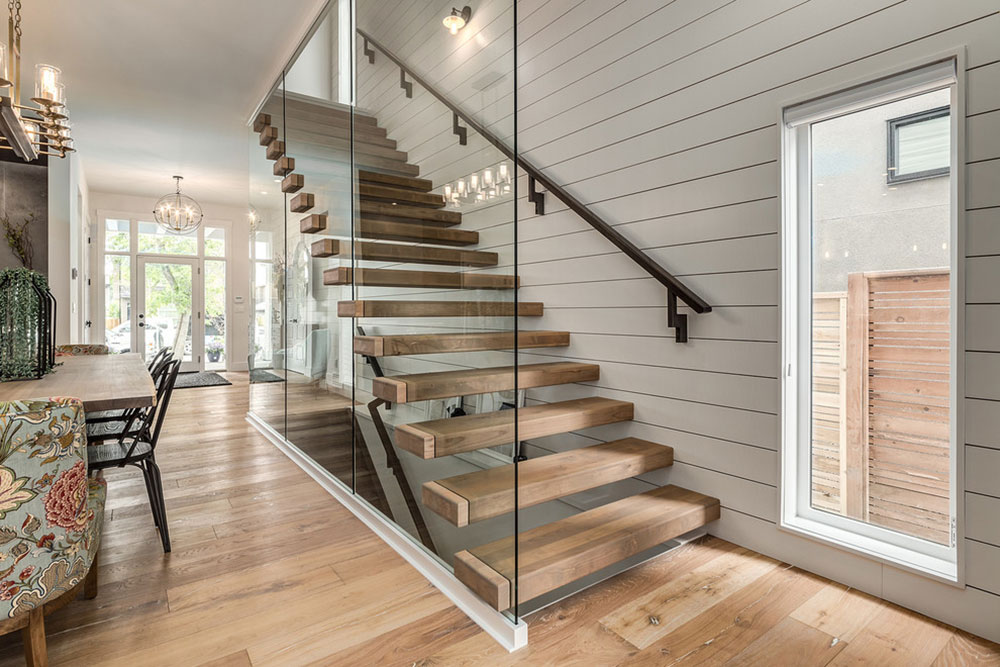 One style that is widespread in modern and avant-garde houses is straight stairs, which have no support below. Instead, these are embedded into the wall step by step so that it looks as if they are floating.

So that they have the necessary strength, metal, plastic, concrete or stone is used as the building material.

However, floating stairs are a technical challenge. One way to better distribute the weight is to install columns or a glass wall, which gives a similar effect to having nothing to hold them.

Compact stairs – The ultimate solution for lack of space 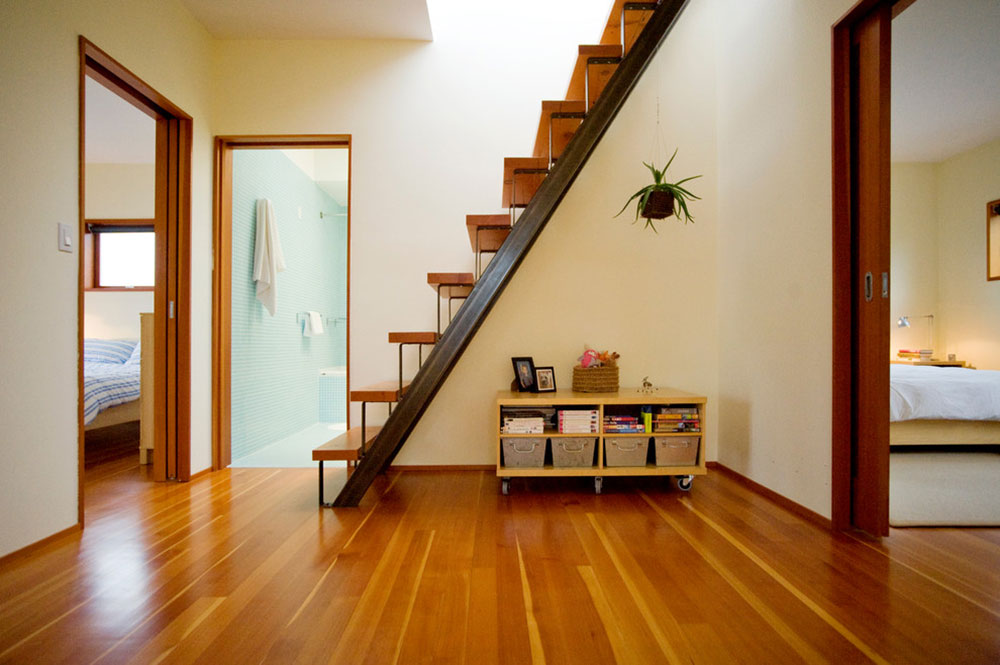 Modern designers have created a staircase that is perfect for small houses and maintains a style similar to that of larger stairs. The compact stairs are constructed in several forms: curved, straight, L-shaped, etc. What distinguishes them from the others is that the steps only allow one foot per step.

By slightly shifting the halves of the even and odd steps, it is possible to “mount” one step over another, so that only half the total length of the traditional staircase is required to go up one level.

Although it’s a smart solution, it’s not the safest option. They are not easy to use, and often the steps have very high heights to use as little as possible. They are usually used in retractable ladders for attics.

Ladder stairs – in the vertical direction 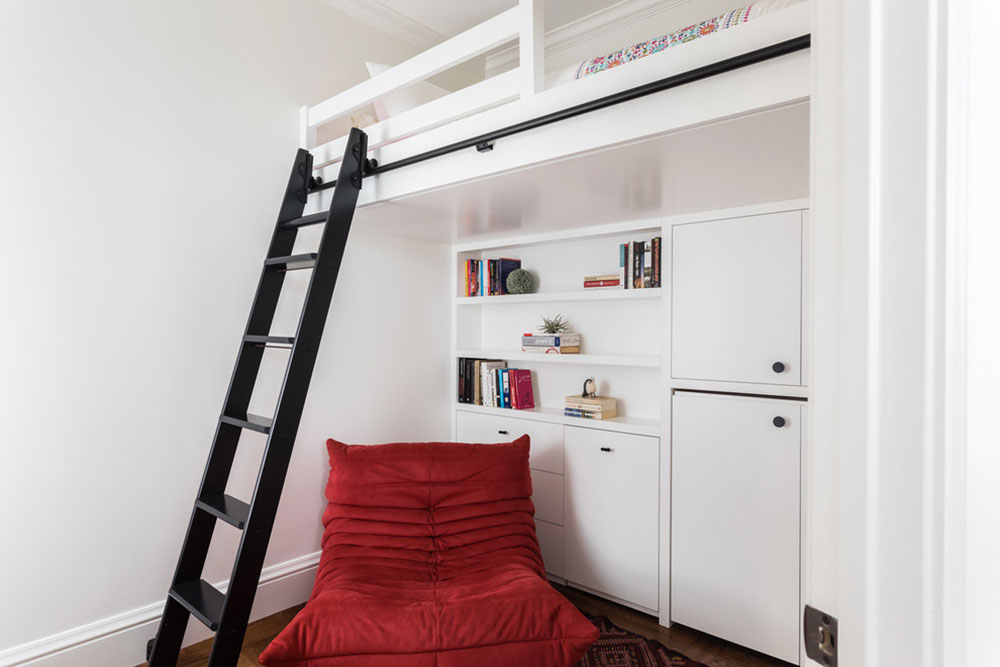 The ladder stairs are the first type of ladder we mentioned in the article that requires hands to climb.

Although they don’t have to be completely vertical, we always have to hold hands. Currently, these types of stairs have many styles, so we don’t have to build an unsightly design into the wall.

In addition, ladder stairs can never be used as main stairs in a house because they are difficult to use. 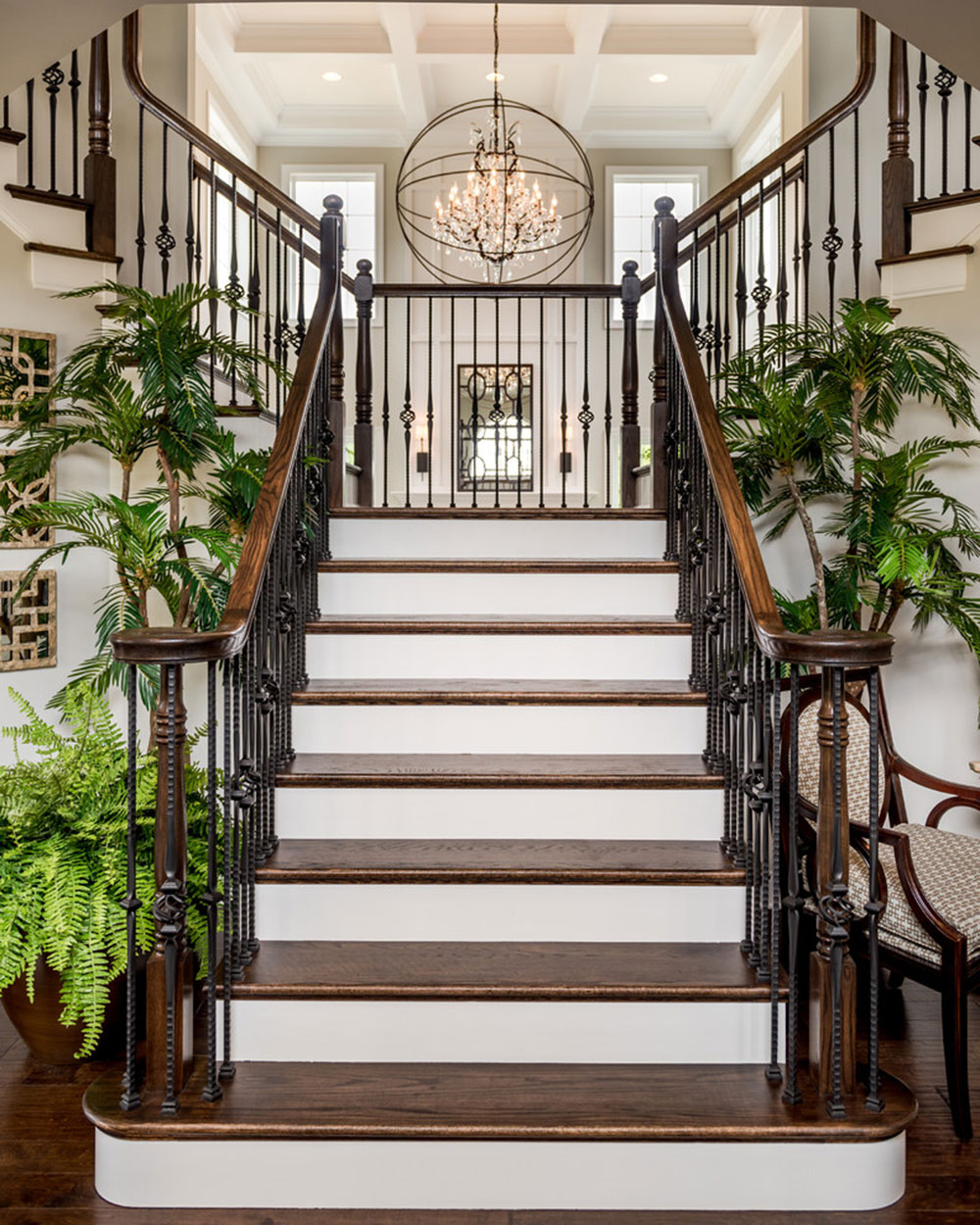 We’ll complete the list with another option worthy of the license fee. A divided staircase is a T-shaped staircase that begins with a single lower half of great width, which is divided in half into two smaller stairs.

The fork is always in a wide pause, and these paths can have angles other than 90 degrees, which even creates a Y-shaped staircase.

Choosing this style requires a very large space for installation. However, like curved stairs, they leave a unique impression, especially since they are usually built near the main entrance.

Designs that adapt to your needs

Remember that the most important thing about stairs is that they are safe for users. To do this, you need to choose between the types of stairs that work in your home. Remember that this element is used all the time, so it must be safe and comfortable to use.

If you enjoyed reading this article about stair types, you should also read these: