Home / Decoration / These are the coolest skyscraper buildings in Dubai 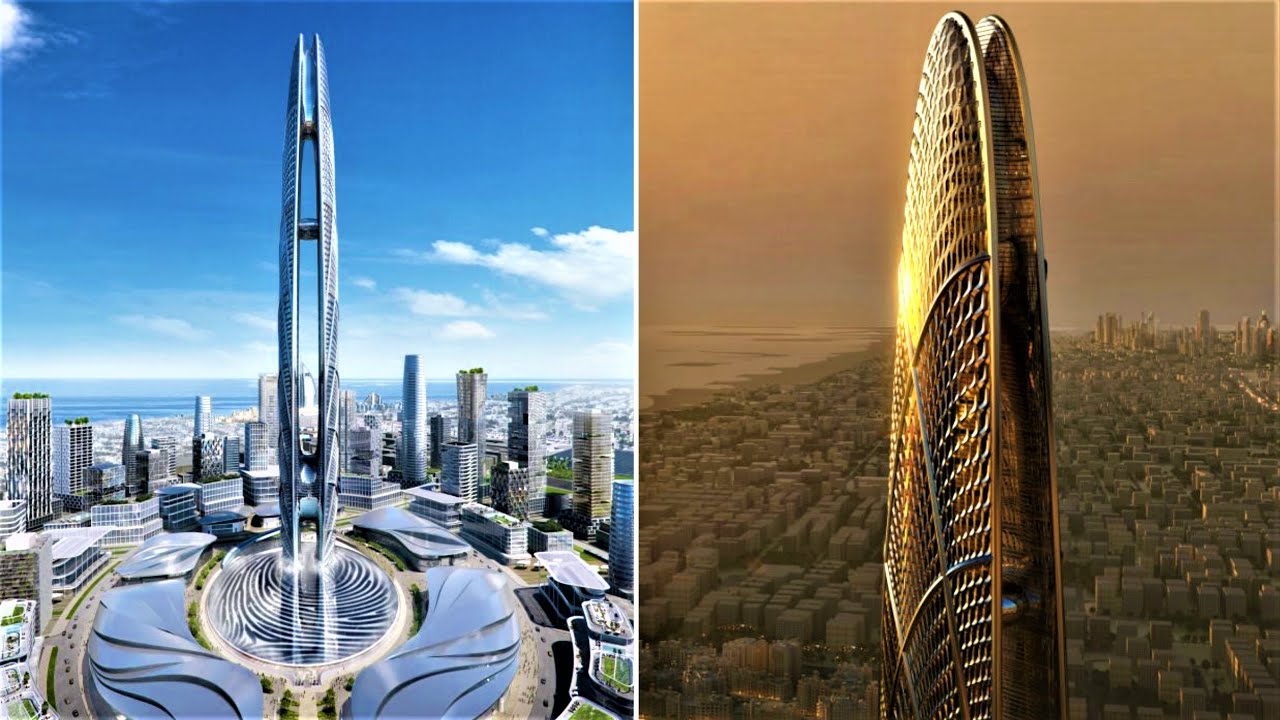 These are the coolest skyscraper buildings in Dubai

If you are a big fan of the Dubai skyscraper, it doesn’t take long to find amazing options. Known for its commercial hub, Dubai has expanded the Dubai skyline which is dynamic and constantly evolving.

Buildings in Dubai have grown and changed over the past 15 years, with various structures competing for the title “Dubai’s tallest building”. However, the Burj Khalifa has been the winner of the competition since 2005. This building in Dubai is also the tallest skyscraper in the world.

The history of the Dubai skyscraper

Take a look at the Dubai skyline and see the tallest buildings in Dubai, shimmering through the heat of the desert. Dubai’s buildings are a symbol of the city’s high level of trade.

Dubai is truly a modern city with a flair for business and a positive outlook on the future. Dubai’s buildings are as dynamic as the city itself. They change and evolve to keep pace with the city’s evolving growth.

Dubai’s buildings only compete with New York and Hong Kong when it comes to the number of buildings that are over 150m tall. Skyscrapers in Dubai are visually interesting and structurally challenging as they were created by some of the world’s leading engineers and architects.

Dubai’s buildings can compete with Hong Kong and Tokyo when it comes to reaching 150 m, but it has the highest number of buildings reaching over 300 m worldwide. At present, 18 buildings in Dubai are over 300 m high, 10 are under construction. No city in the world can compare it.

Cool skyscrapers in Dubai to check out 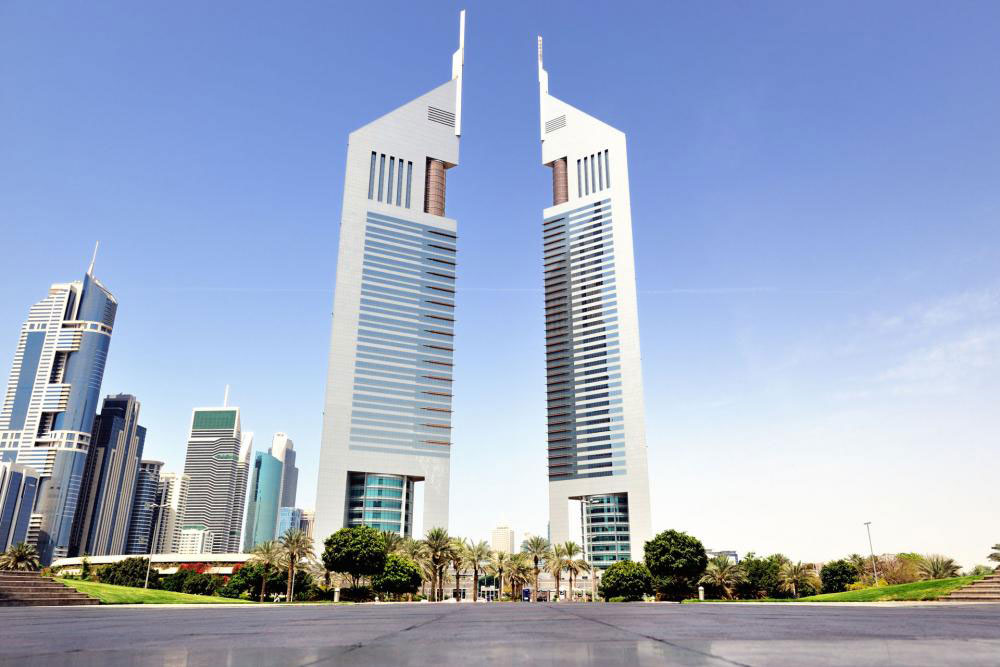 It may seem controversial to bring these two buildings to the top in Dubai, but both buildings are sensational in design. They were 309 m high and were built with the Burj Al Arab, which opened four months earlier. The towers opened on April 15, 2000. They represented a long period of growth and construction.

Emirates Towers consists of an office tower and a hotel. These buildings in Dubai are located next to the World Trade Center. The towers are connected by a two-story shopping center.

The towers were designed by Hazel Wong, who wanted to create architecture impressive enough to stand the test of time. She has certainly achieved her goal. 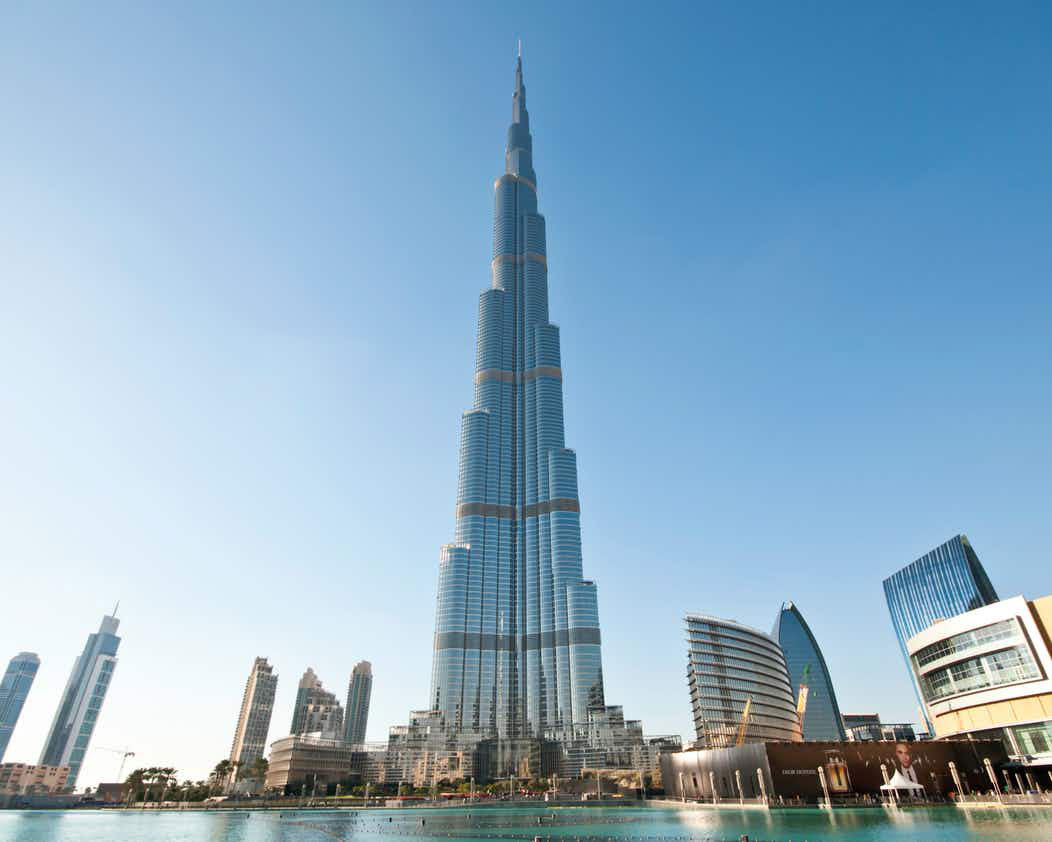 You can access the SKY experience upstairs in the building. Visitors are invited to the 148th floor and have a breathtaking view of Dubai.

This beautiful building in Dubai was designed by Skidmore, Owings and Merrill of Chicago. The company won a design competition where they had the opportunity to design this amazing skyscraper in Dubai. Take a look at the three-layer footprint. This footprint is inspired by the spider lily. 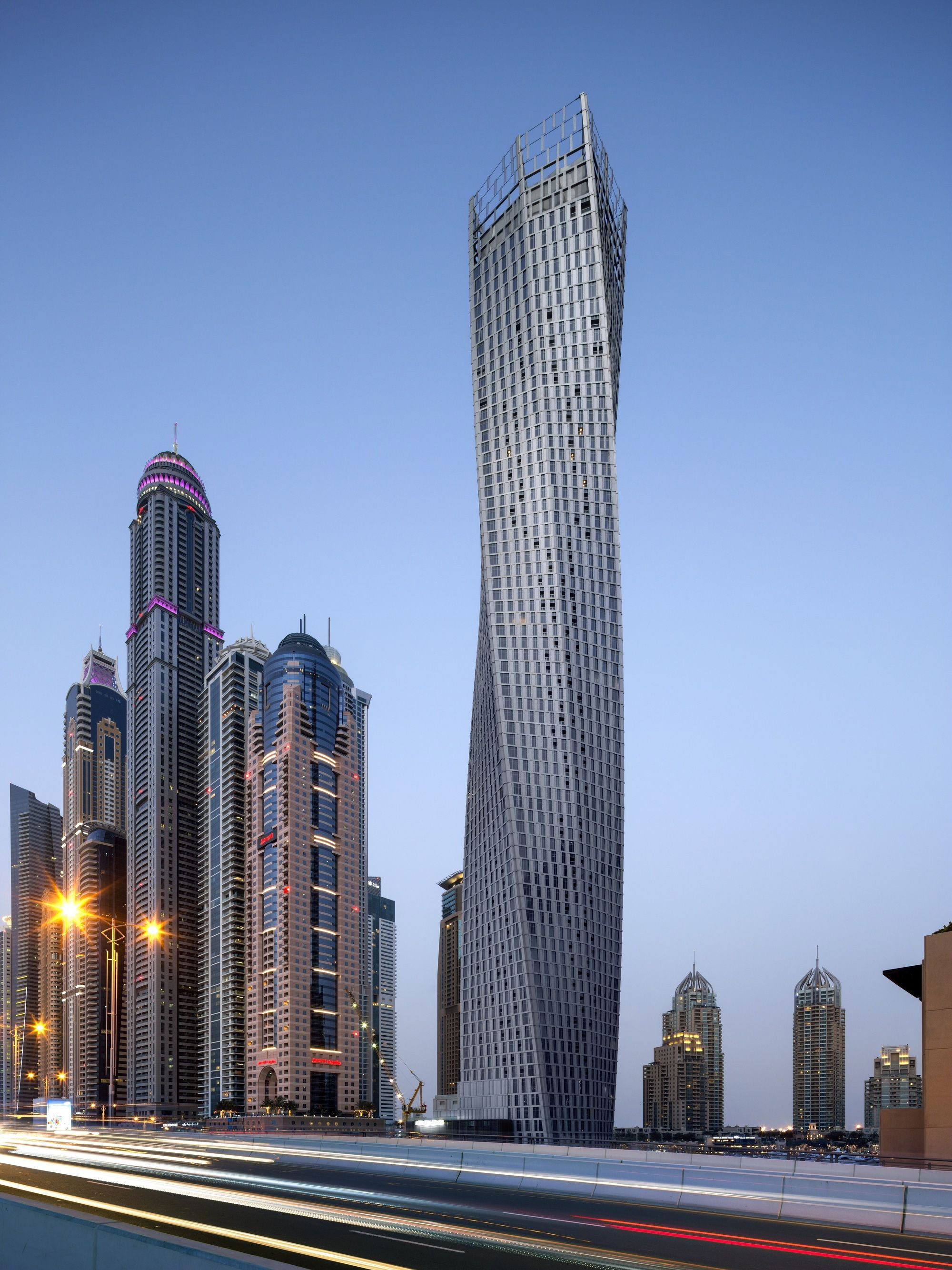 The Cayan Tower is certainly one of the most eye-catching towers in Dubai and at first glance looks like a fantasy beanstalk. This is because each floor has been rotated very slightly (1.2 degrees) so the end result is a 90 degree rotation across 75 floors.

The tower was completed in 2013 and at that time was the tallest residential tower in the world. It has since been expanded, but the striking architecture makes it one of the most attractive skyscrapers in Dubai. Each of the 495 apartments offers a wonderful view of the beach and glimpses of super yachts docked on the shore. 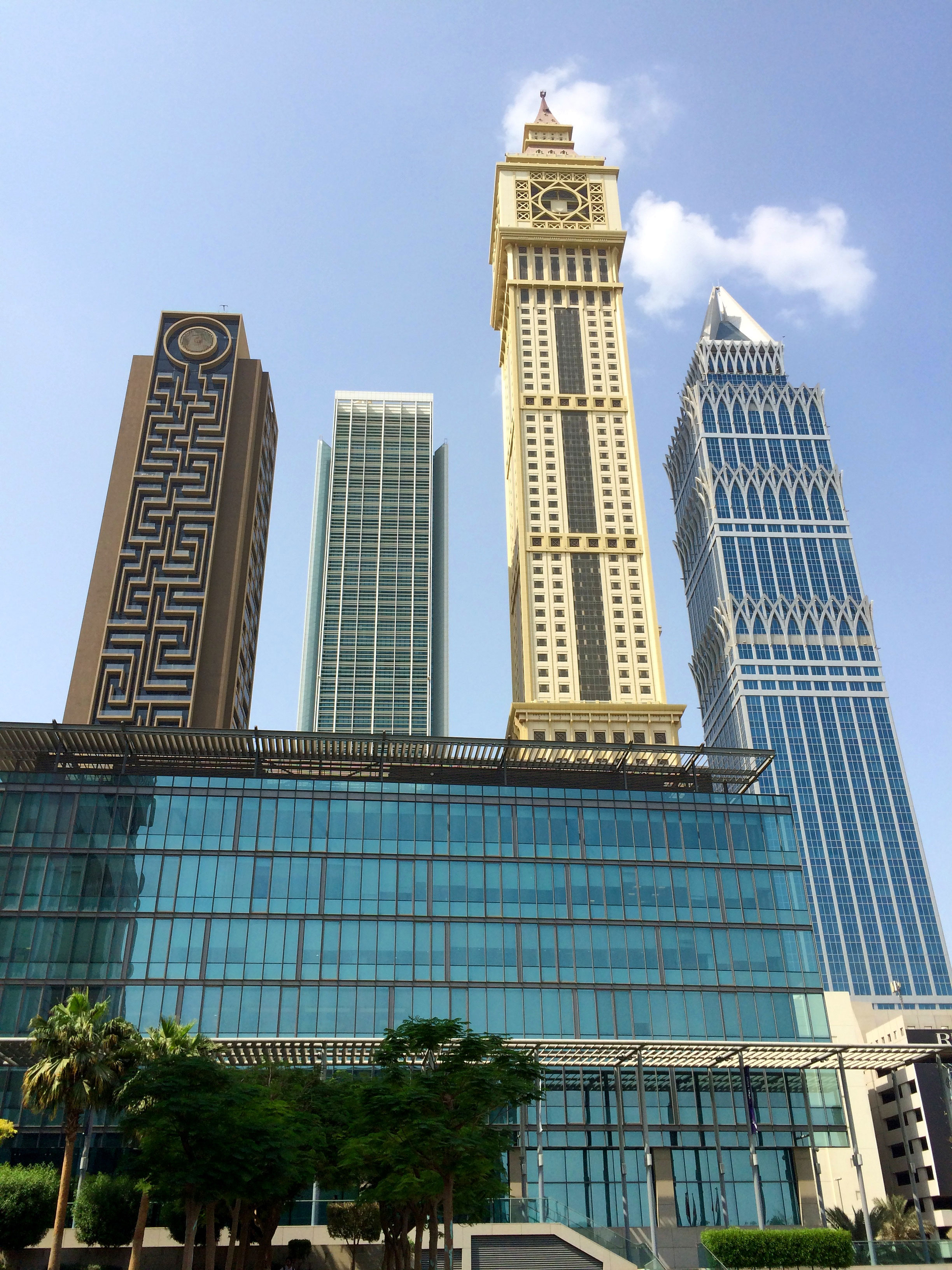 As the second tallest bell tower in the world. This skyscraper in Dubai is 328 m high. This building is located near the financial center and was inspired by the Elizabeth Tower (better known as Big Ben) in London. However, there is no dial on this tower. The building was completed in 2013 and designed by the architect Eng. Adnan Saffarini. The Arabian Construction Company designed this beautiful building in Dubai.

At just 501 feet tall, this isn’t as tall as the real Dubai Towers. However, the building is reminiscent of the image of hands in prayer, a Thai greeting. It is one of the first Gulf hotels to receive EarthCheck Gold certification for sustainability. 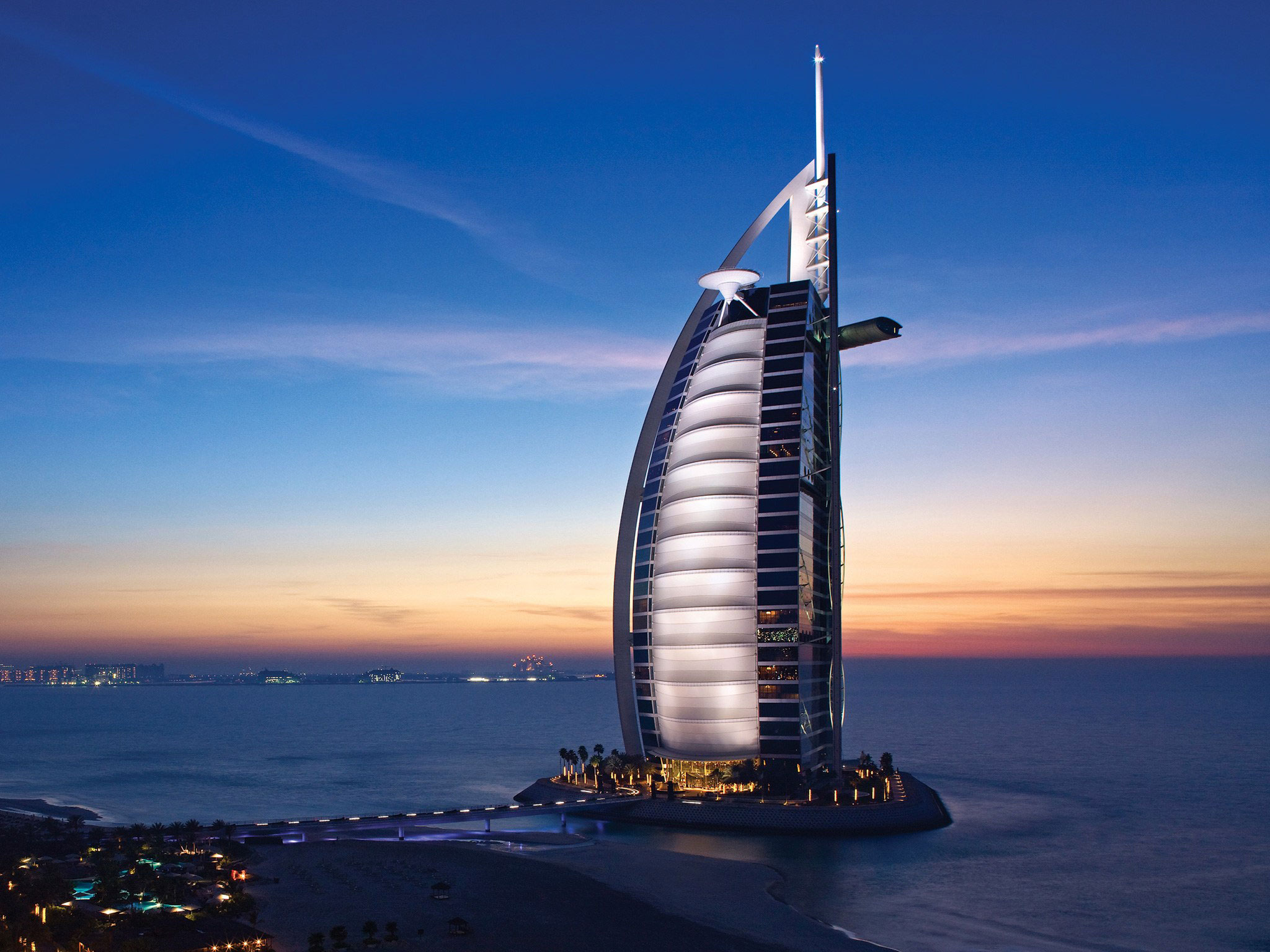 Did you know there is a skyscraper shaped like a sail in Dubai? Or that it is a 7-star hotel? That’s right, and this high-rise hotel in Dubai also has its own island.

This beautiful building in Dubai was designed by Tom Wright in 1999. It is accessible via a helipad and a private bridge. As one of the buildings designed during Dubai’s building craze, it has become a symbol of the city. It’s over the top and the very luxurious interior features a multi-level aquarium and lots of gold and red. 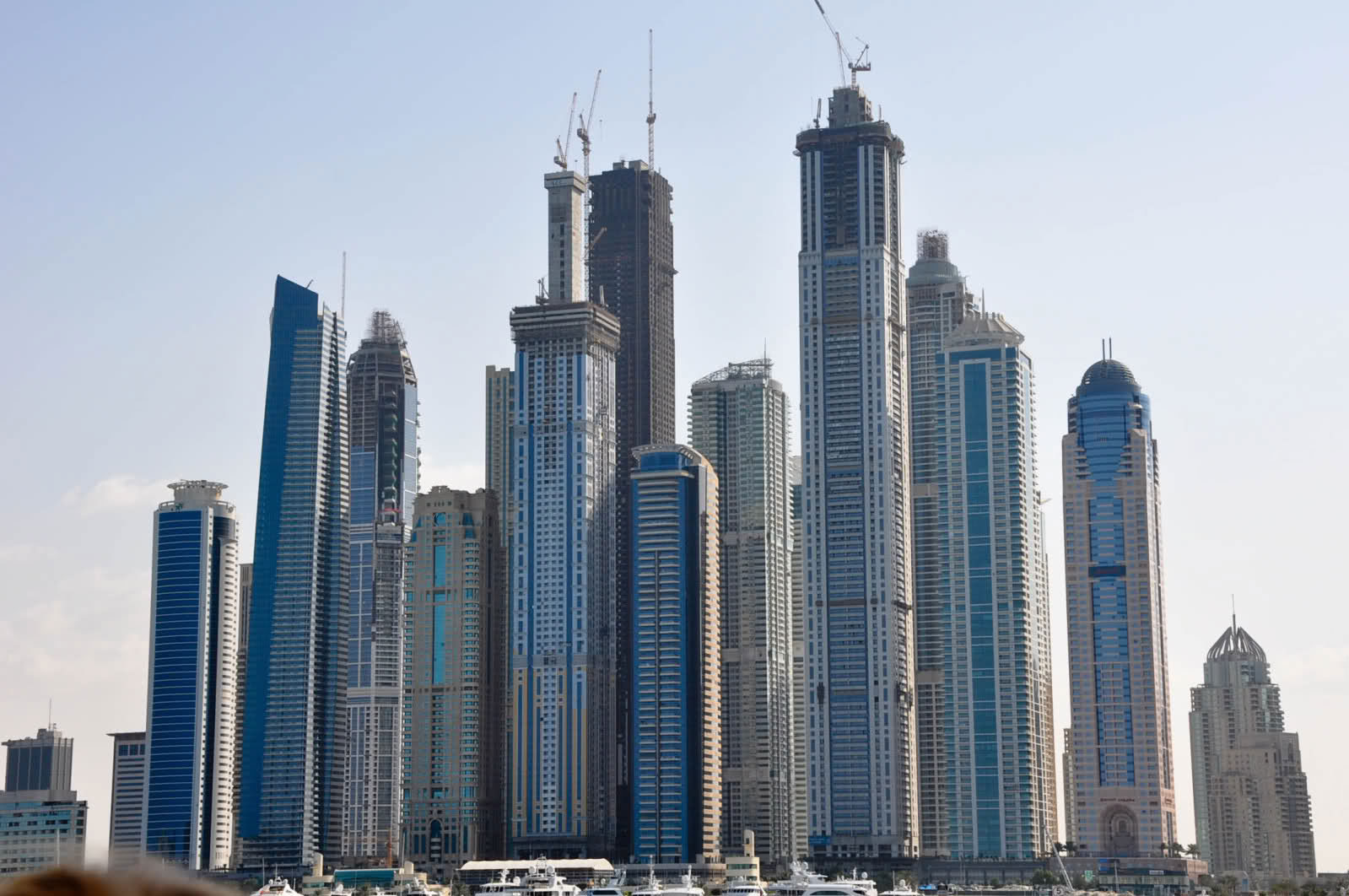 With a height of 414 m, the Princess Tower is one of the most majestic skyscrapers in Dubai. It became one of the tallest residential buildings in the world in 2012 and still holds this impressive record. 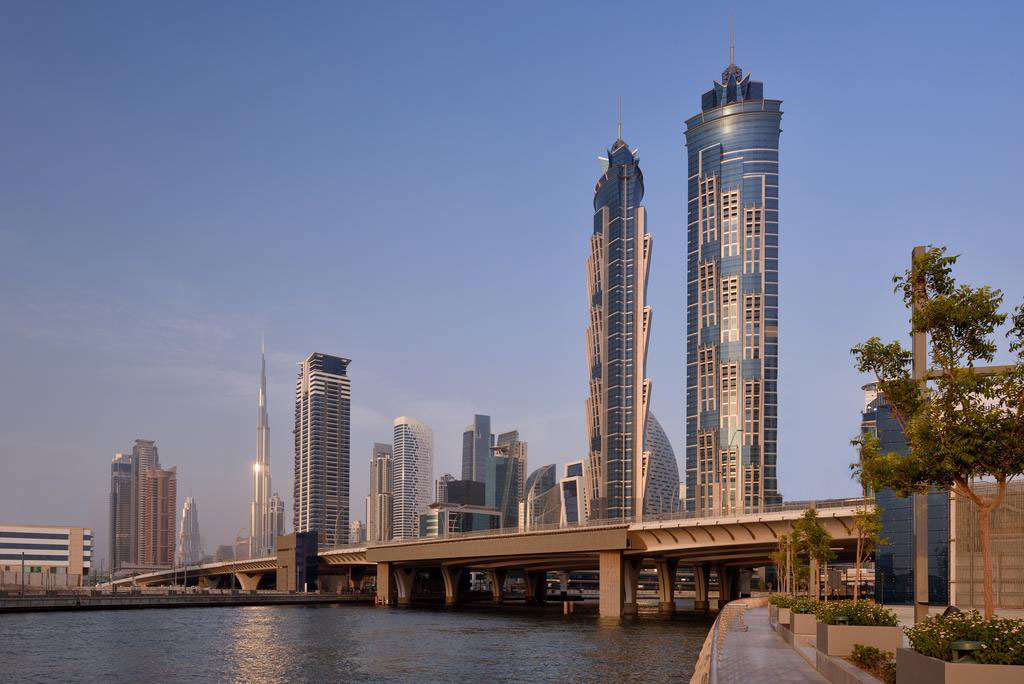 This building consists of two sensational Dubai towers and is considered the second tallest hotel in the world. It reached 1,165 feet and was completed in 2012. The building was designed by Arch Group Consultants. The design is based on the date palm, an integral part of Dubai culture. 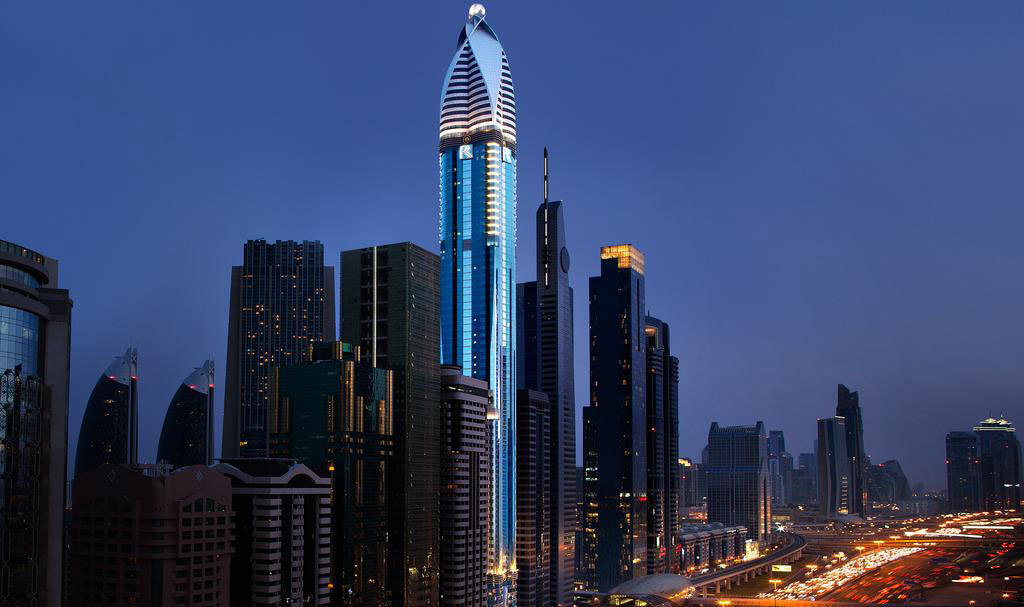 This skyscraper in Dubai, once the largest hotel in the world, was completed in 2007 by the Arabian Construction Co. It is one of the few hotels in Dubai that complies with Islamic law and remains alcohol-free. 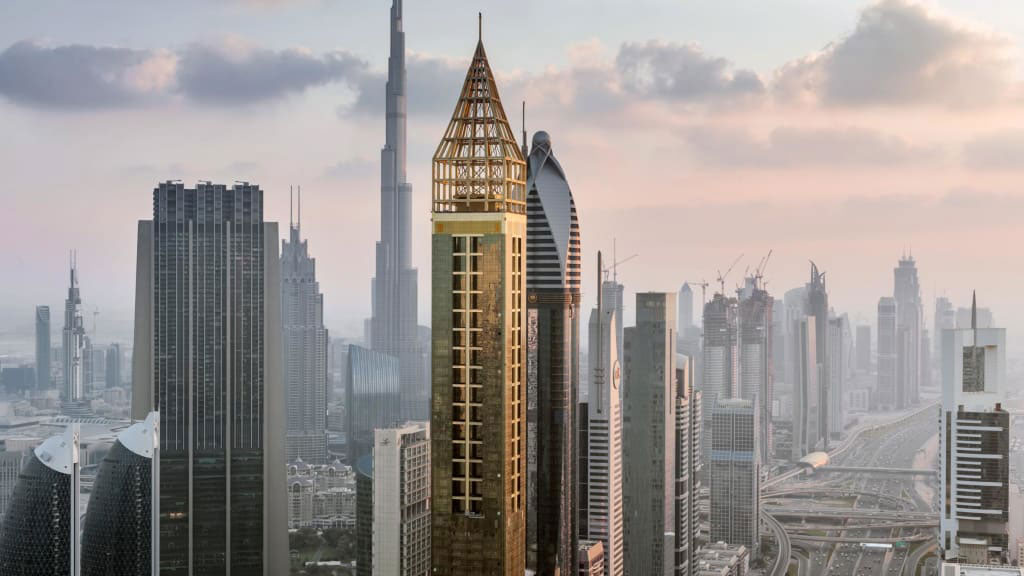 Until February 2018, this building in Dubai was the tallest hotel in the world. The hotel has a 1,168 foot tower and 528 guest rooms. With a golden facade and a pool terrace overlooking the city, the hotel will impress. Take a look at the pyramid summit. You will also find five different restaurants at this skyscraper hotel in Dubai. 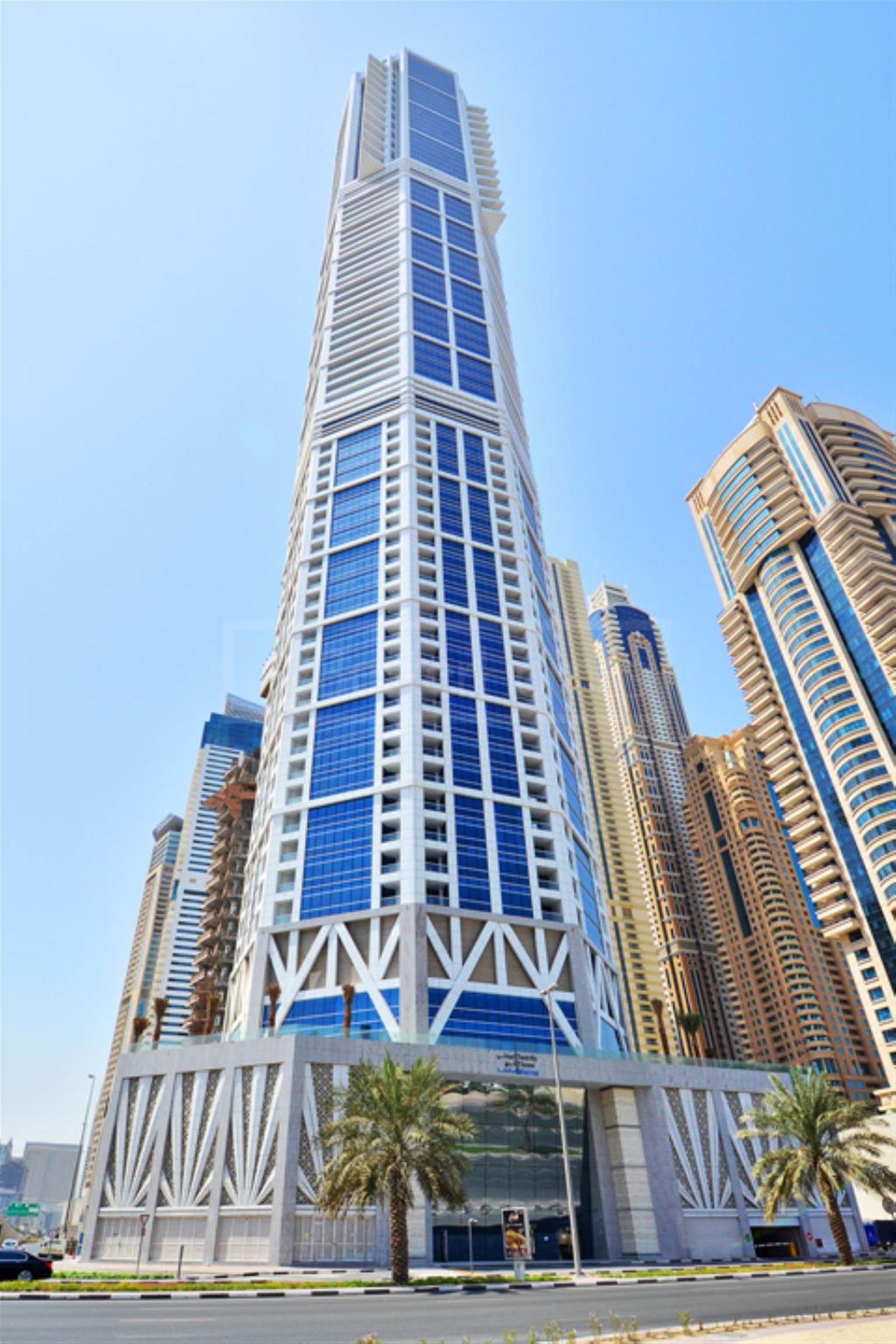 23 Marina is 392 m tall and has 90 floors. This makes it one of the most impressive skyscrapers in Dubai. It was once the tallest residential building and has 57 swimming pools plus a private elevator in each maisonette. No wonder that more than 79% of this building was sold before construction began. It was completed in 2007.

The Dubai skyscraper stands out from the horizon, making it a symbol of the city. As one of the world’s commercial hubs, the steel and glass of buildings in Dubai tell the story of desert life and the heights that can be achieved when people are determined enough to achieve their goals.

If you enjoyed reading this article about Dubai Skyscraper, you should also read this: