Home / Decoration / What are the best looking skyscrapers in Los Angeles? 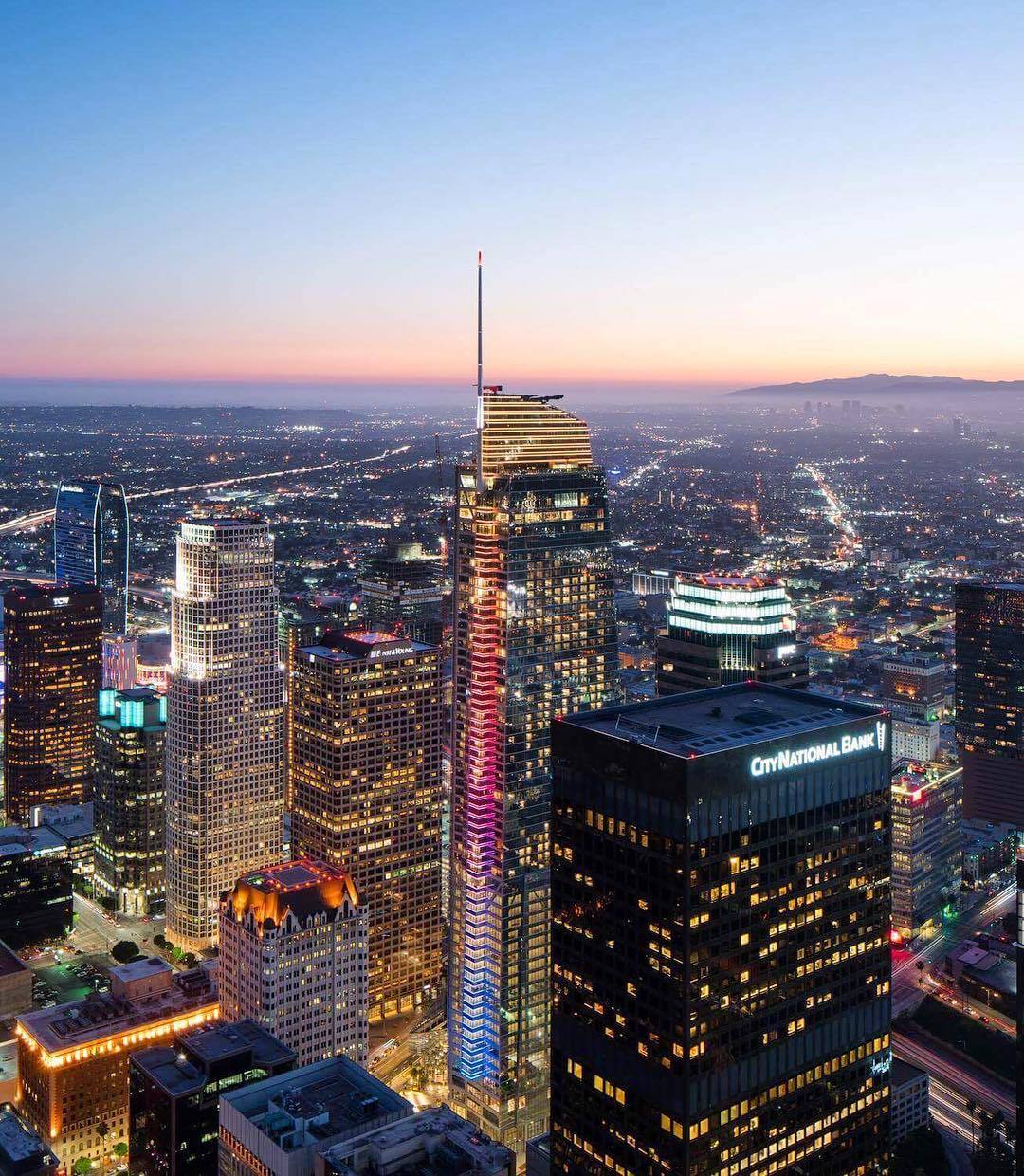 What are the best looking skyscrapers in Los Angeles?

Have you noticed how Los Angeles skyscrapers reach for the stars? Like city residents, Los Angeles buildings are aiming to reach new heights. The LA skyline is an important part of the city’s identity. The Los Angeles skyline can help people determine where they are in relation to downtown Los Angeles.

Los Angeles skyscrapers are a symbol of hope, power, community and trade. When residents see the beautiful LA skyline on the horizon, they know they are at home. For visitors, the City of Angels is easy to spot by the skyscrapers that dot the LA skyline.

The best part of a skyscraper is the ability to go upstairs and observe the beauty of the city from a large observation deck. Buildings in Los Angeles are no exception and offer visitors the opportunity to see the city from a new perspective.

Los Angeles skyscrapers are difficult to build. This is because the city is very close to the San Andreas fault line. Skyscrapers need to be carefully planned and built in the event of an earthquake. Even so, there are some skyscrapers in Los Angeles. These were built to strict standards.

The Braly building was considered the first Los Angels tower. It was completed in 1903.

Let’s take a look at some of the most iconic skyscrapers in Los Angeles and how they affect the city’s skyline.

Check out these Los Angeles skyscrapers 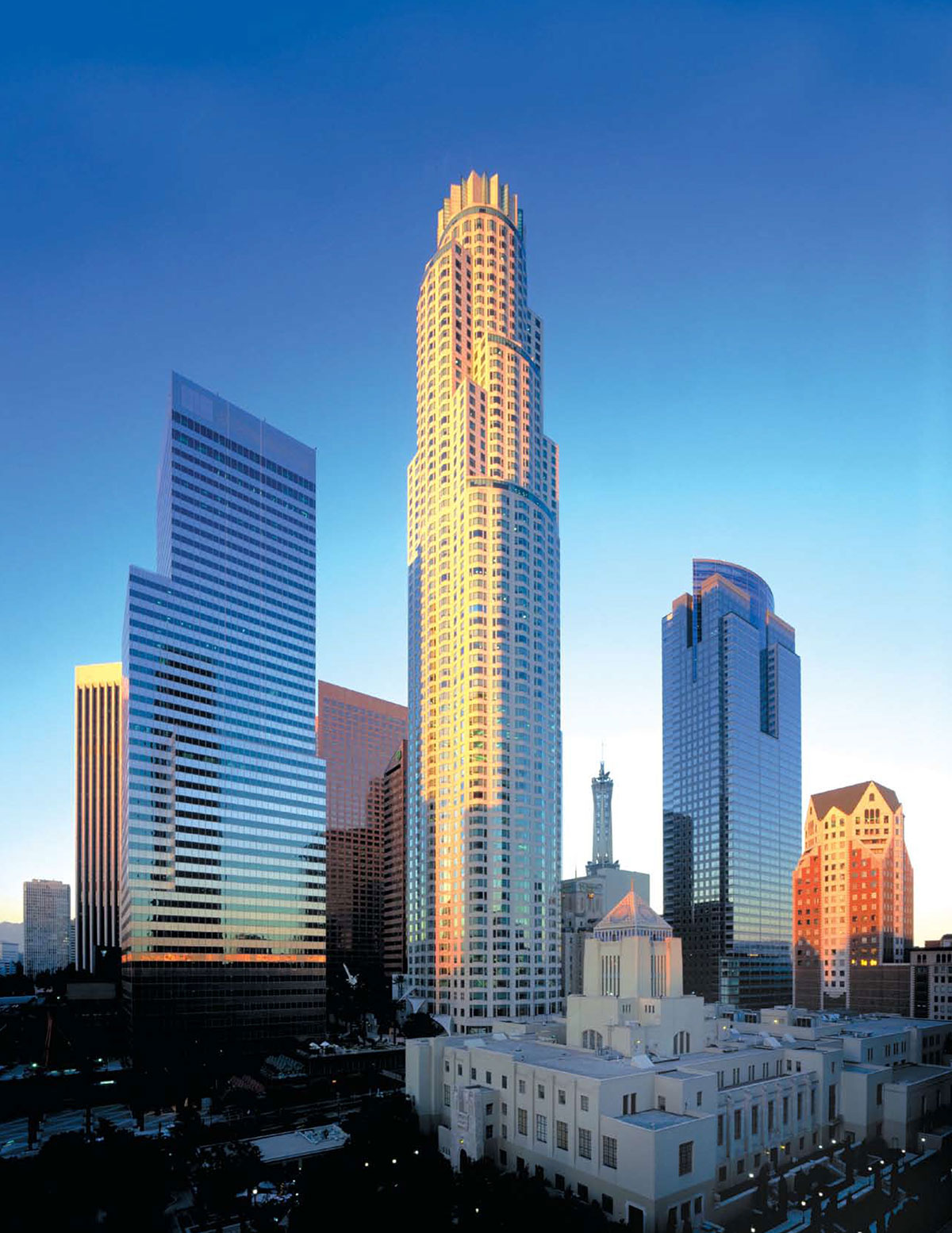 Visitors to this building in Los Angeles also have the opportunity to take part in the Skyslide. Visitors can enjoy an exhilarating ride in a 45-meter-long glass slide that has been created on the outside of the skyscraper. The slide was placed 1000 feet above street level, so it’s not for the faint of heart 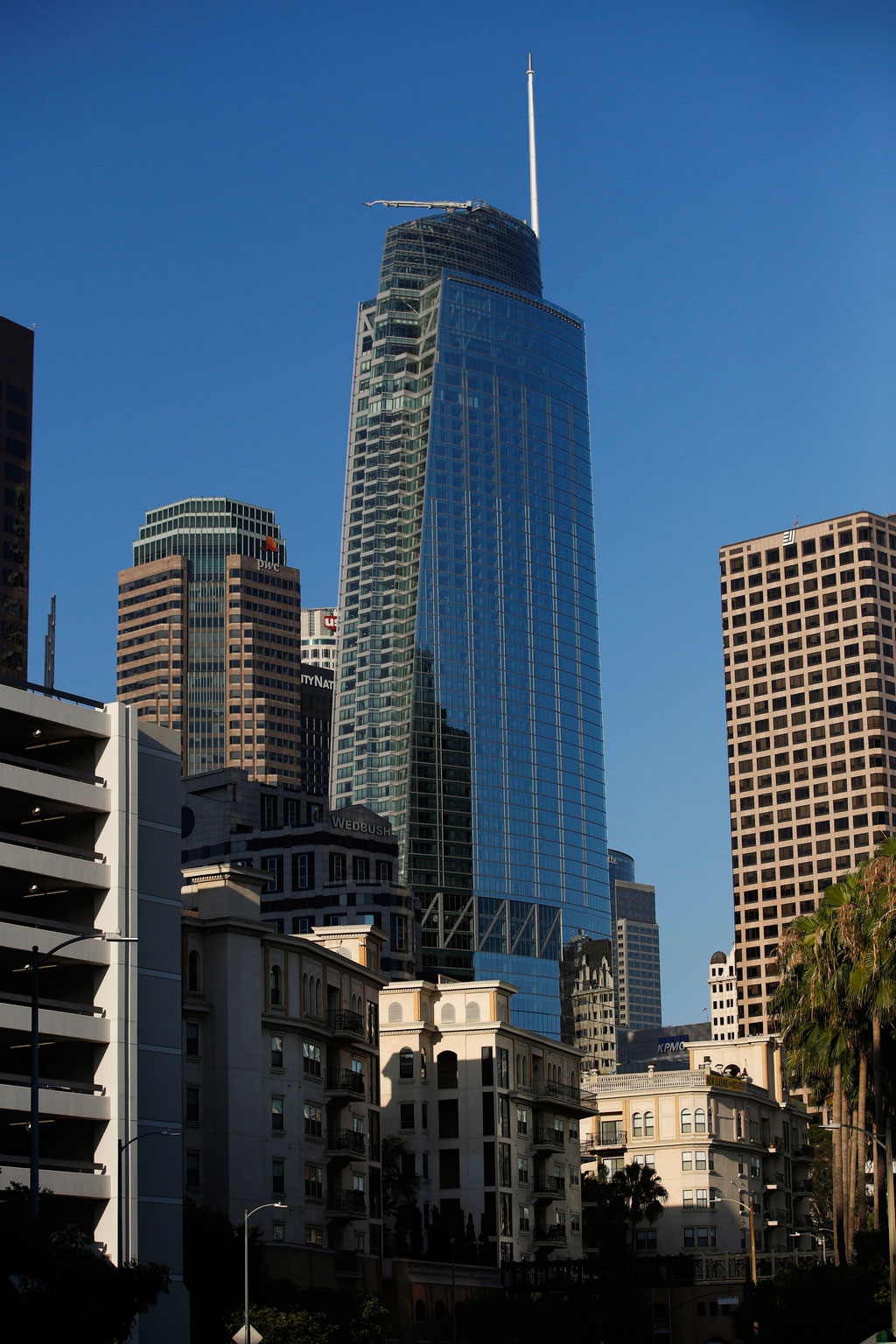 This tower is the tallest skyscraper in LA and is made of steel and glass. This LA building is the tallest building in the United States, west of the Mississippi. It’s 73 stories tall, which isn’t the greatest number of any LA skyscraper, but each story has a great height.

The Wilshire Grand stands out in the Los Angeles skyline not only for its size, but also for its design. It uses classic elements like marble and glazed terracotta combined with modern materials like concrete and steel for a unique look. The building is owned by Korean Air and was designed in the shape of an airplane wing. 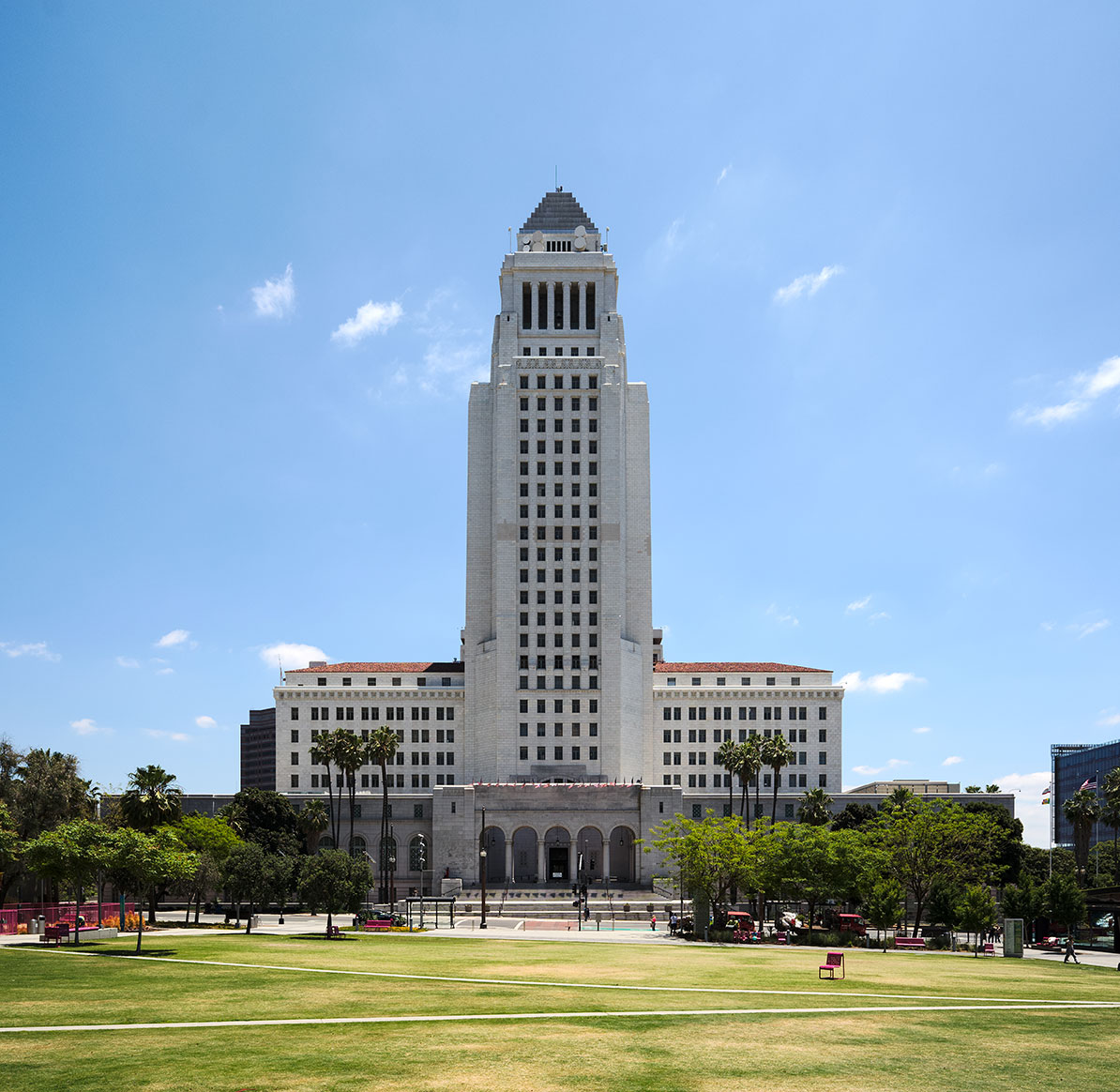 Until 1966, City Hall was the tallest building in Los Angeles that has stood out from the downtown LA skyline for over four decades.

This was because LA created an ordinance in 1905 that no building should exceed 150 feet. This gave LA a very inconspicuous skyline for many years. At 450 feet, City Hall was three times the height of the competition 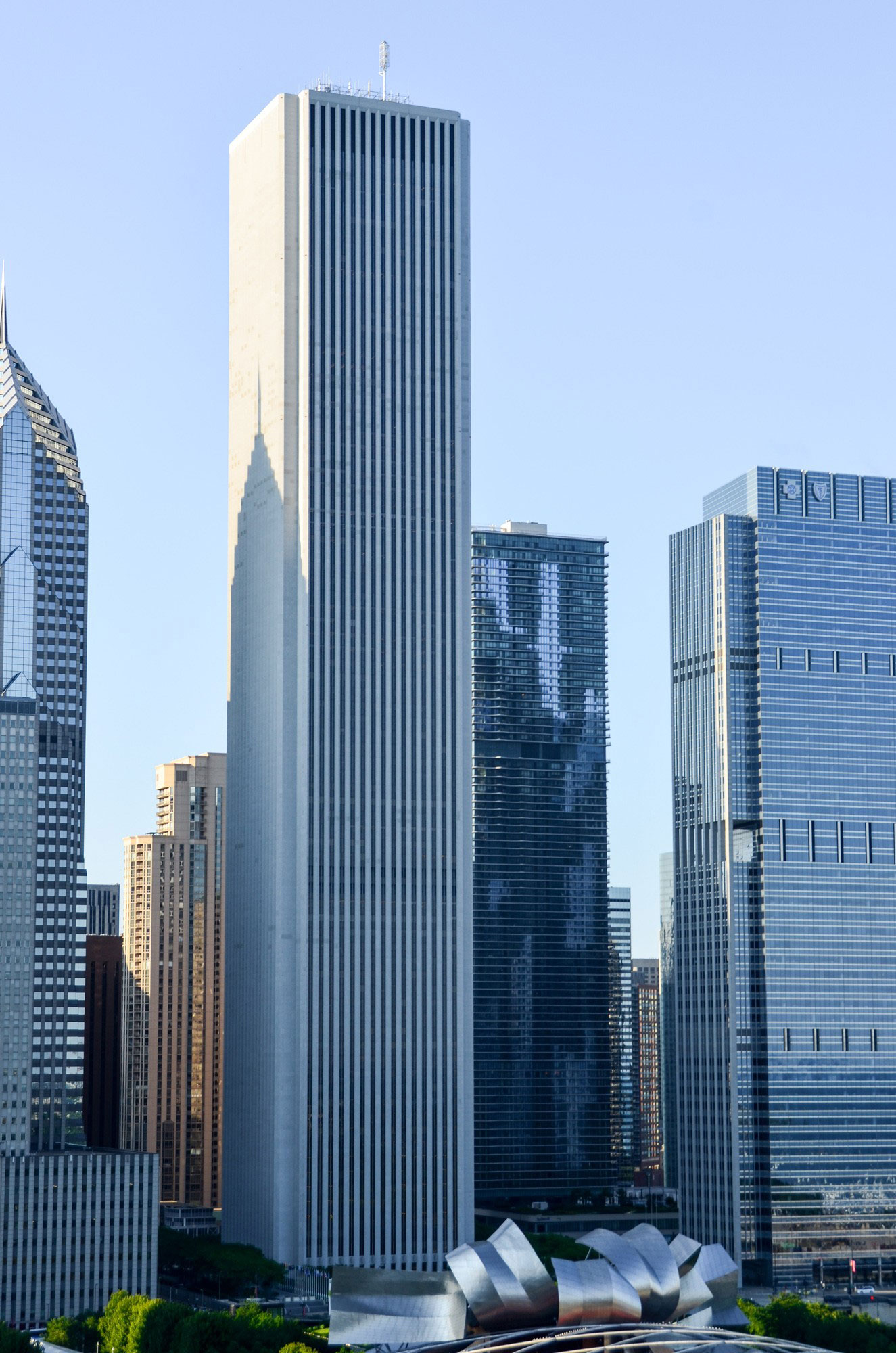 The Aon Tower was completed in 1973 and is often considered one of the least valued skyscrapers in LA. This building in LA is not quite 50 years old, so it is just below the status of the old LA heritage, which is often viewed with nostalgia. 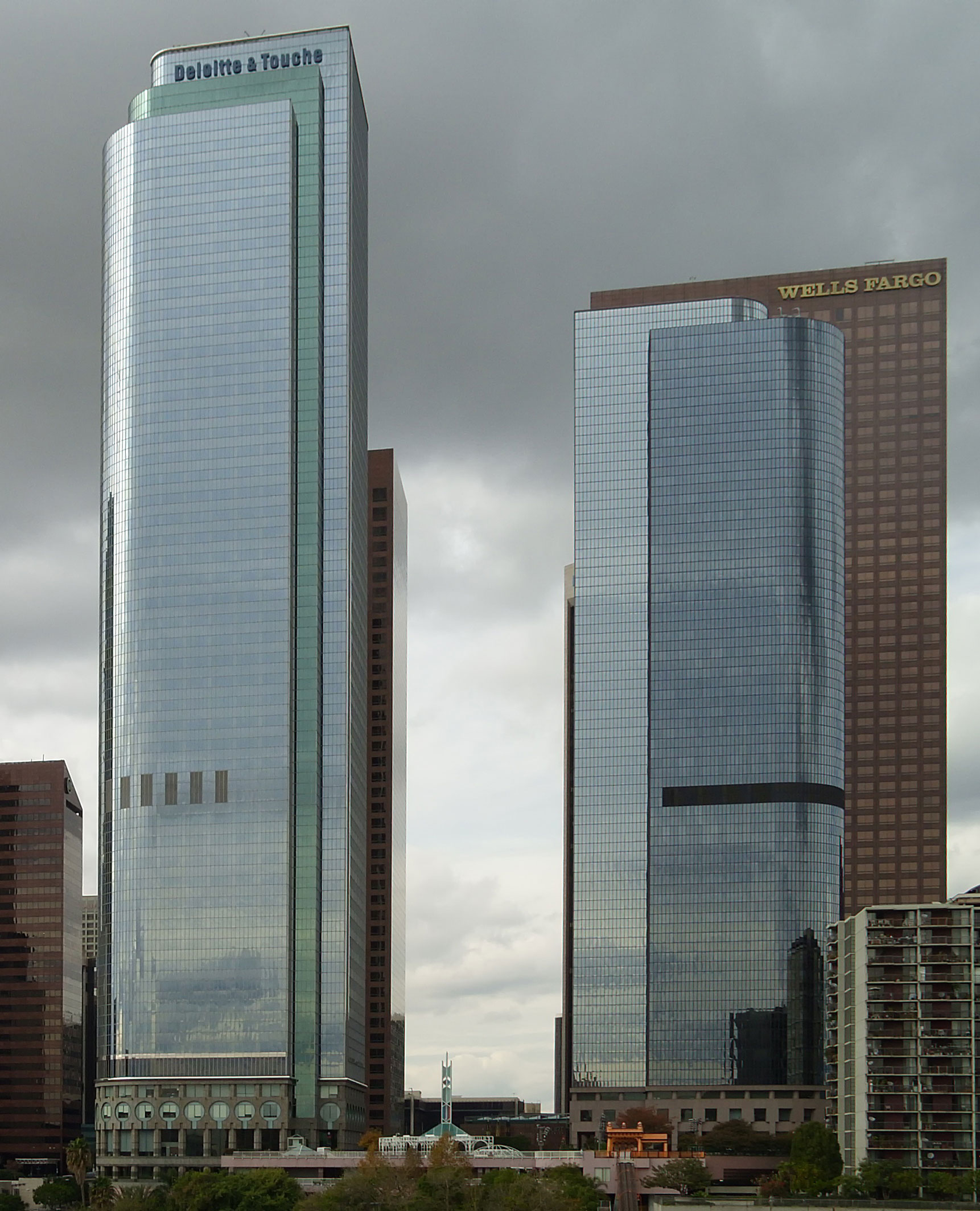 The plaza has an amazing 1.5 acre water space and is also home to the Museum of Modern Art and the Colburn School of Performing Arts. The Omni Hotel is also part of the plaza.

Tower of the gas company 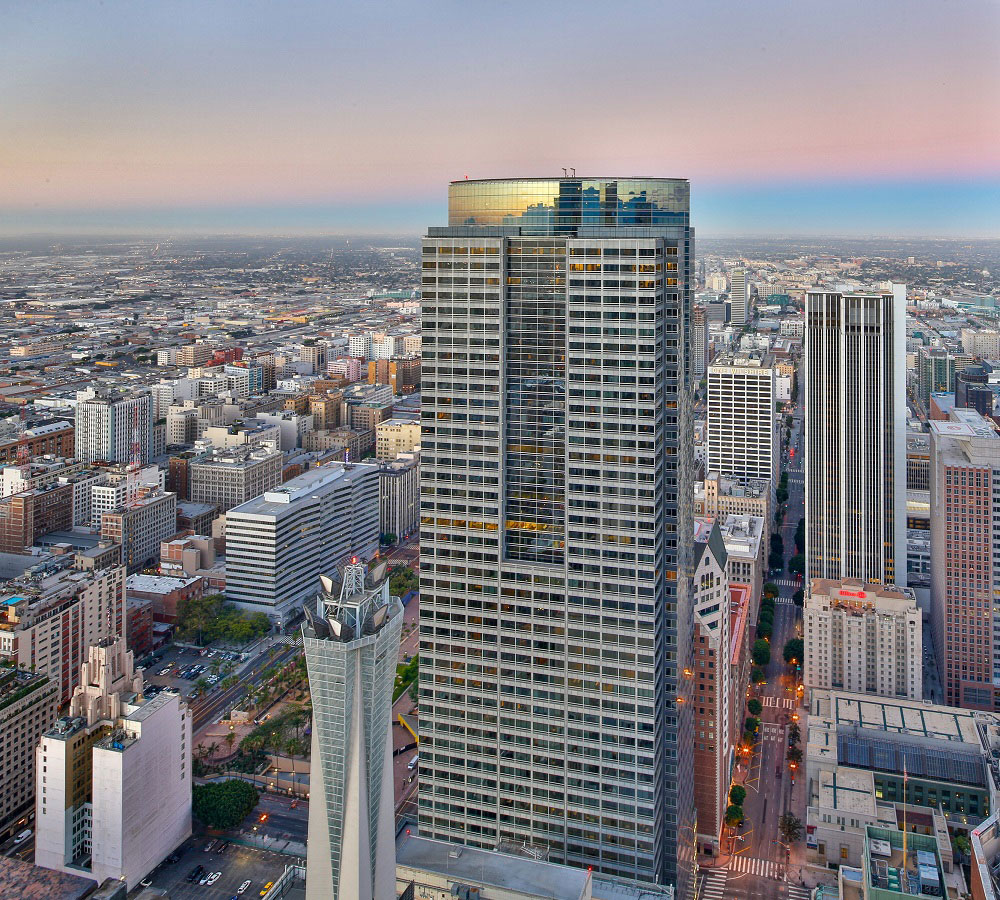 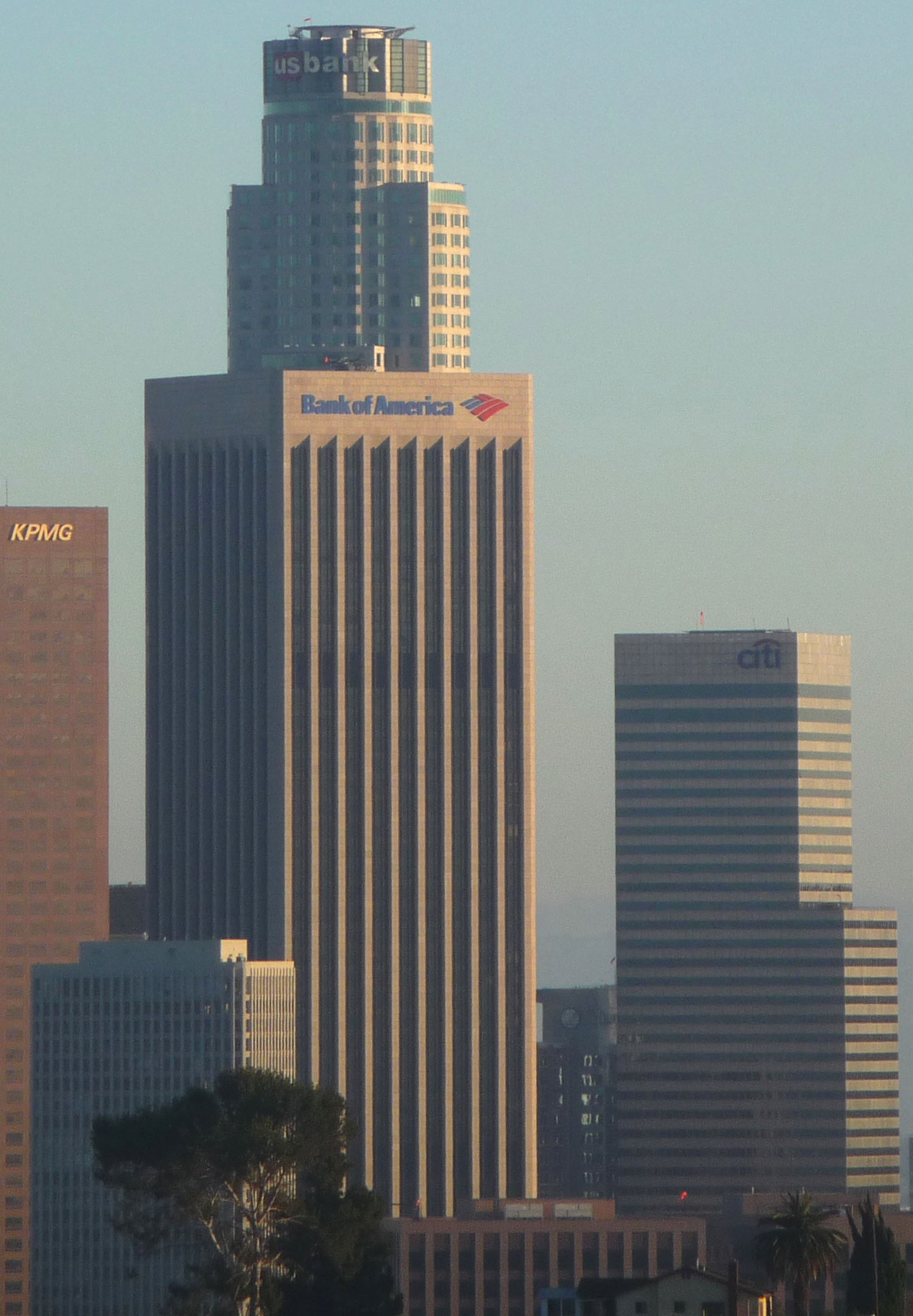 At 224.03 m, this LA Tower stands out from the skyline. Formerly known as Bank of America Plaza, the tower has 55 floors and was built in Bunker Hill in downtown LA. It is the 92nd tallest building in the United States. While it isn’t the tallest building in LA, it has been rated the highest.

When it was built in 1974, the building was unique in that each side represented true north, east, south and west. The building was occupied by Capital Group Companies, Security Pacific National Bank, and Sheppard, Mullin, Richter & Hampton. 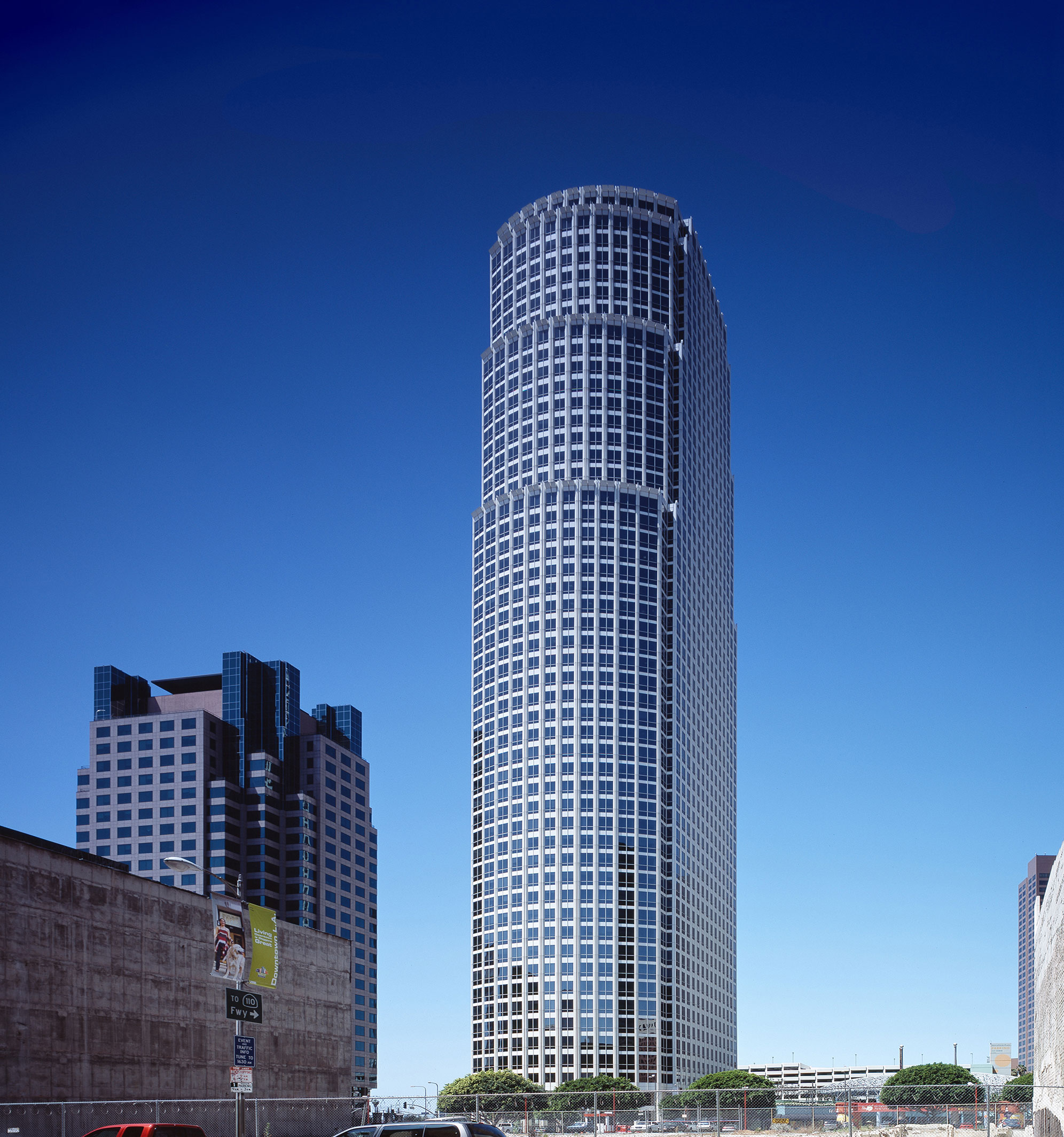 Also known as the Pelli Tower, this Los Angeles building is 221 m tall and has 52 levels. The tower was designed by César Pelli and is located in the financial district next to the 7+ Fig Shopping Center. It gives the DTLA skyline a wonderful presence.

It has a silver and glass exterior and a three-story marble lobby. The owner, Brookfield Office Properties, bought the building from Maguire Properties 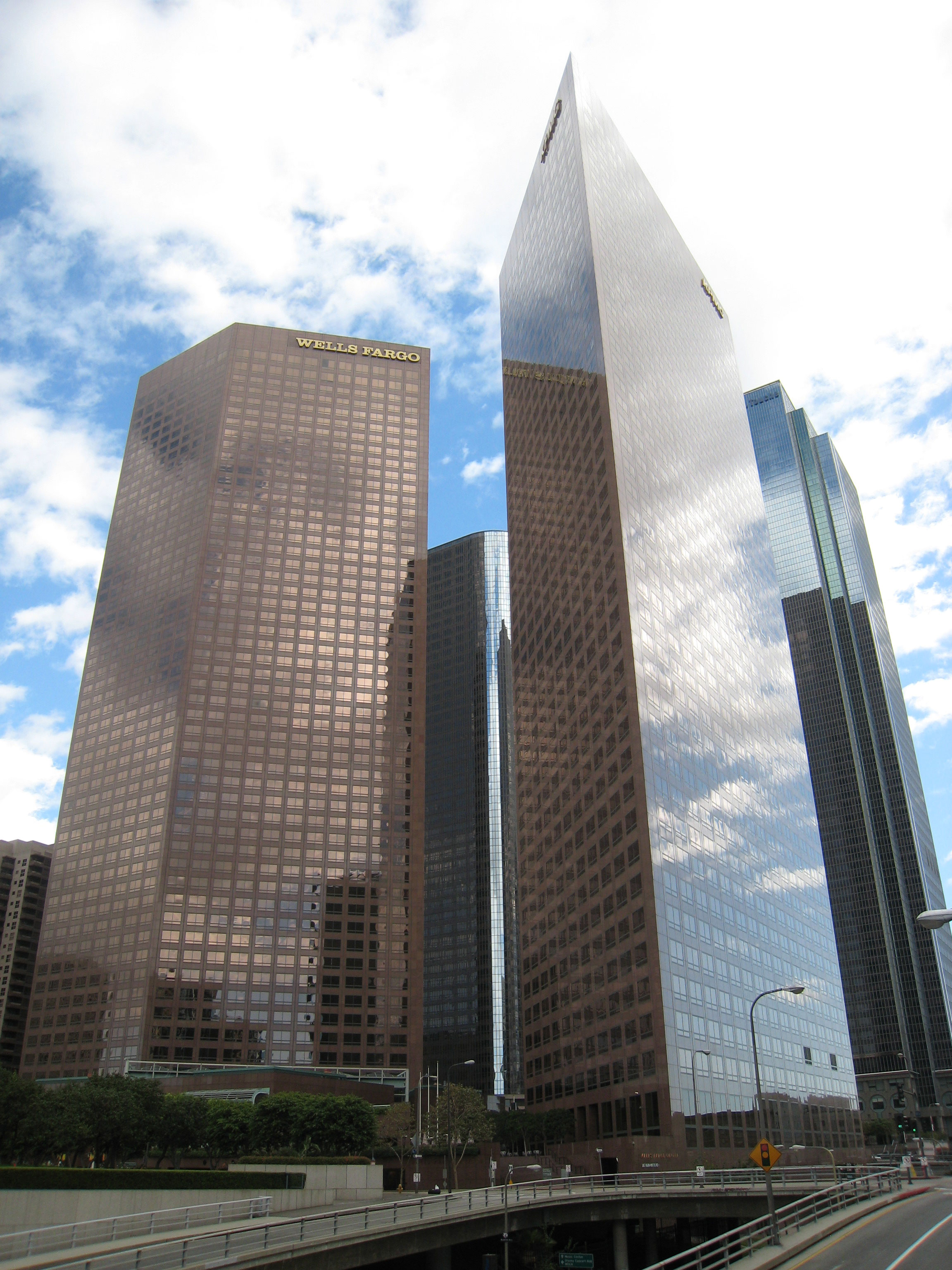 The twin towers of the Wells Fargo Center complement the skyline of Downtown Los Angeles. The complex was built on Bunker Hill and has a north and south tower. The two buildings are connected by an atrium. The Wells Fargo building is 200 meters high and is the tallest building in the complex. 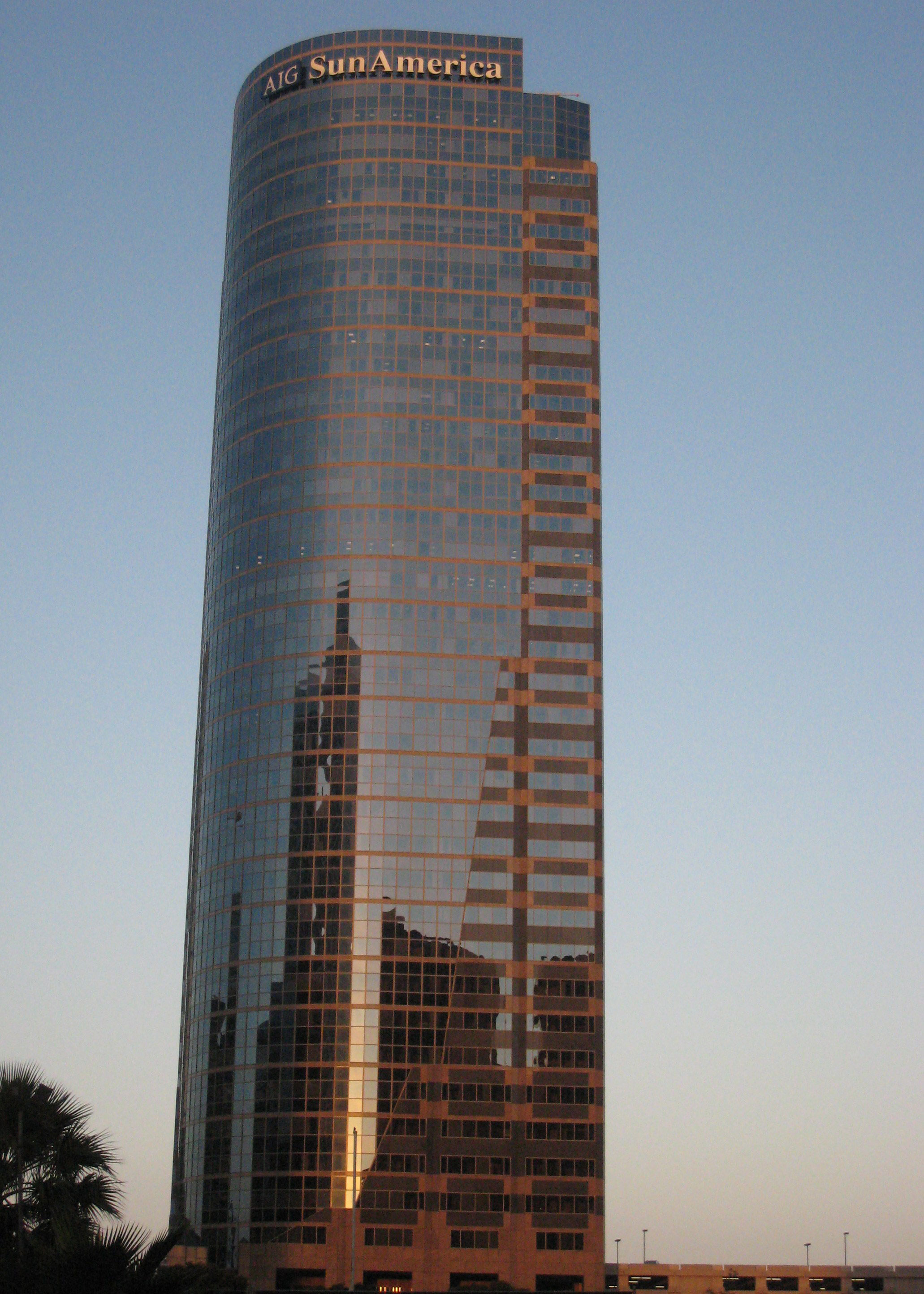 The Sun America Center was completed in 1990. It is located at a height of 163 m and was built in Century City. It is the third tallest tower in Century City and the 20th tallest among Los Angeles skyscrapers. Visitors can park in an attached 8-story parking garage. Jonson Fain designed this building in LA and won the BOMA International 2001/2002 Office Building Award for the Sun America Center. 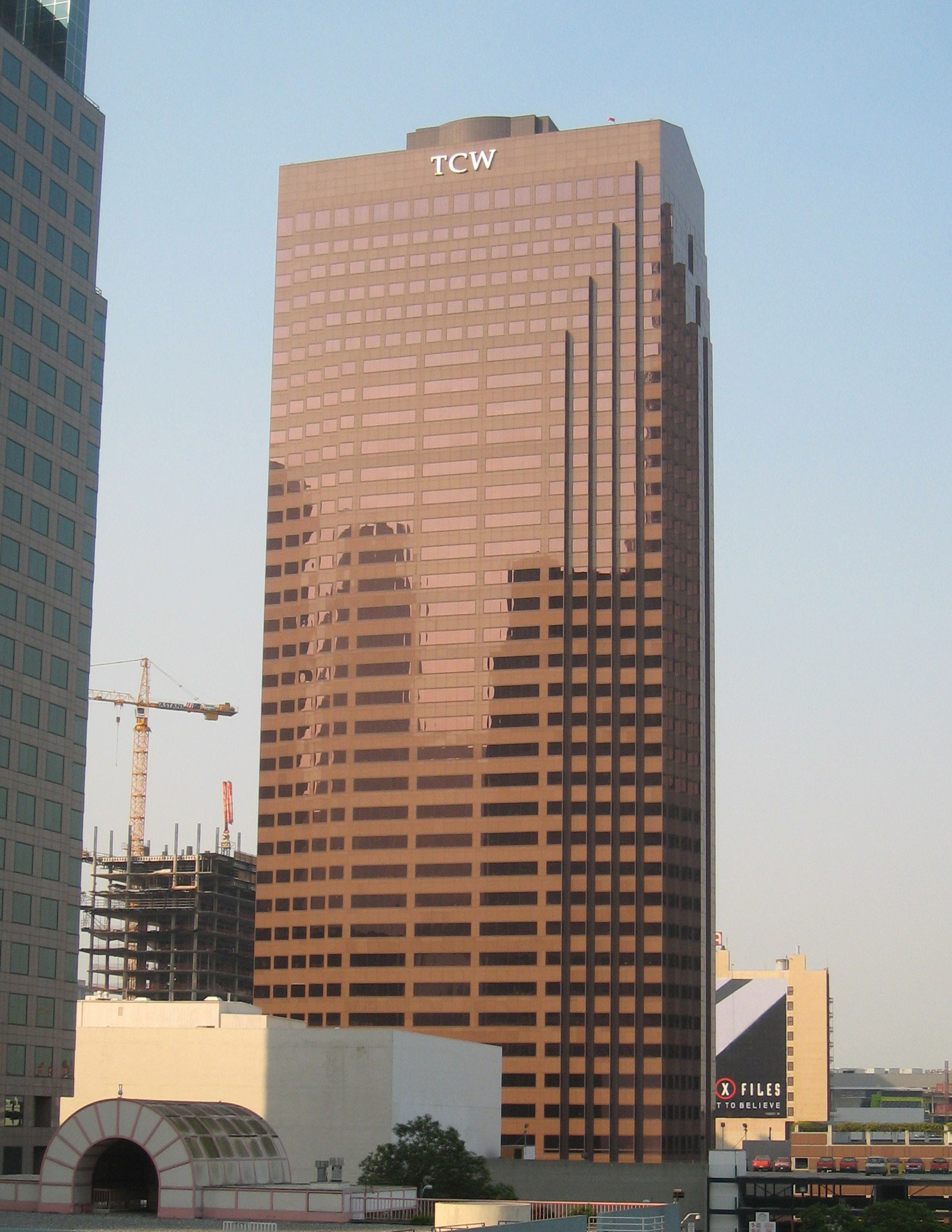 The TCW Tower is with 157.58 m smaller than many skyscrapers in Los Angeles. It is currently the 19th tallest building in Los Angeles. Upon completion, it was awarded the ‘Outstanding Structural Design Award’ by the Tall Building Design Council. This LA Tower was completed in 1990 and designed by Albert C. Martin & Associates 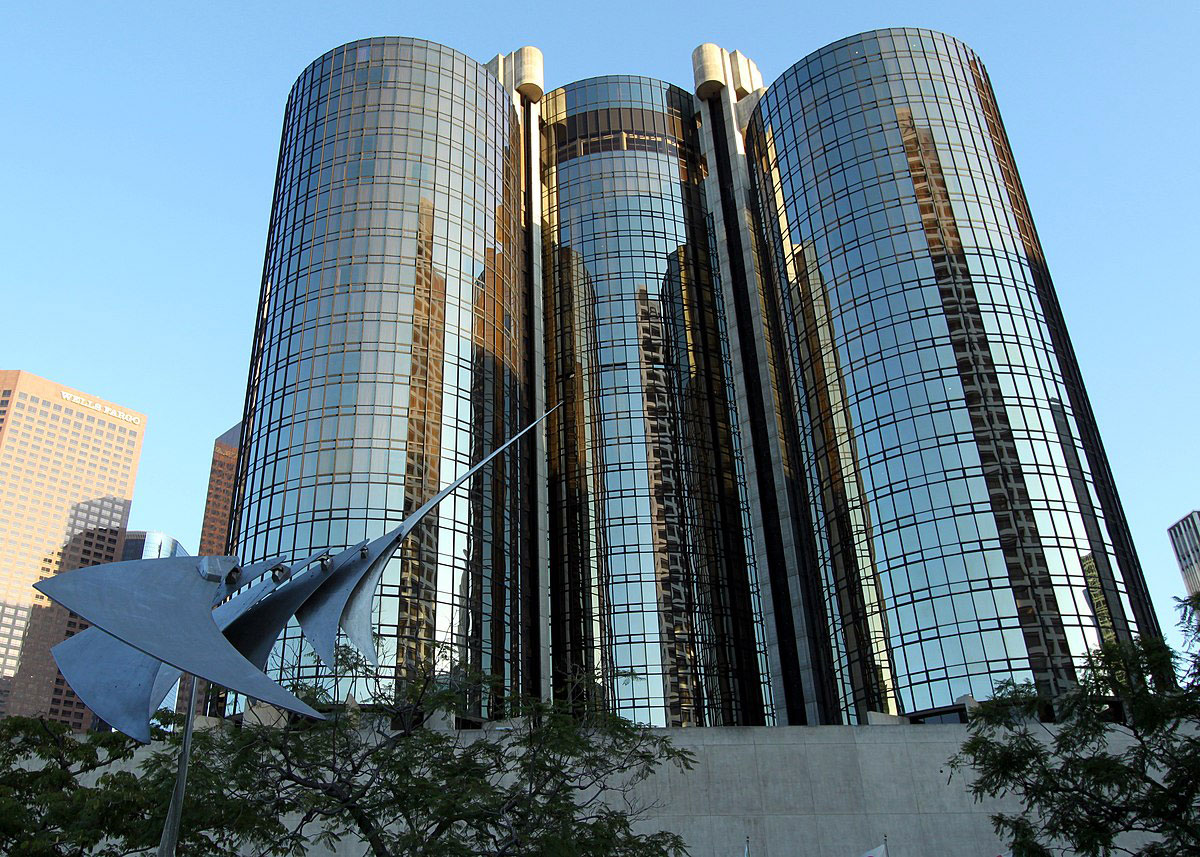 This LA tower was a futuristic building that opened in 1976. While it has its critics and some say its futuristic style is dated, the LA skyline is undoubtedly uniquely appealing. No other skyscraper in Los Angeles can compare!

The Bonaventure Hotel has a six-story atrium, glassy cylindrical elevators, and offers picturesque views of the city. The postmodern design is still a favorite with photographers and location scouts. Not everyone may understand its design, but there’s no denying that the hotel is visually appealing.

If you enjoyed reading this article on Los Angeles Skyscrapers, you should read these too:

Previous High-performance chairs against back pain: intelligent way to high performance
Next Tips for the best possible furnishing of the apartment