Home / Decoration / The tallest skyscrapers in Singapore in the city-state

The tallest skyscrapers in Singapore in the city-state

Skyscrapers in Singapore are known worldwide for their large numbers. The city has over 4,300 skyscrapers. Many are located in the city’s business district, and over 64 of these buildings reach more than 459 feet tall.

Development soared in the 1970s and 1980s, and the city’s business district began to change. Singapore experienced an industrial boom that lasted into the 2000s. This was a time when tall buildings were continuously being built and this period of time had a significant impact on the Singapore skyline.

Why did skyscrapers evolve?

Although many skyscrapers were developed relatively recently, they are commonplace in most modern cities. Elevators have certainly helped develop skyscrapers. Without elevators, it would be very unlikely that buildings would be that tall.

The first elevator was invented by Elisha Graves in 1853. This created a safe transport between two floors. As soon as people could move between floors, it made sense for the structures to move up. The first skyscrapers were built in New York and Chicago, saving space and fighting urban sprawl.

Let’s take a look at these skyscrapers in Singapore 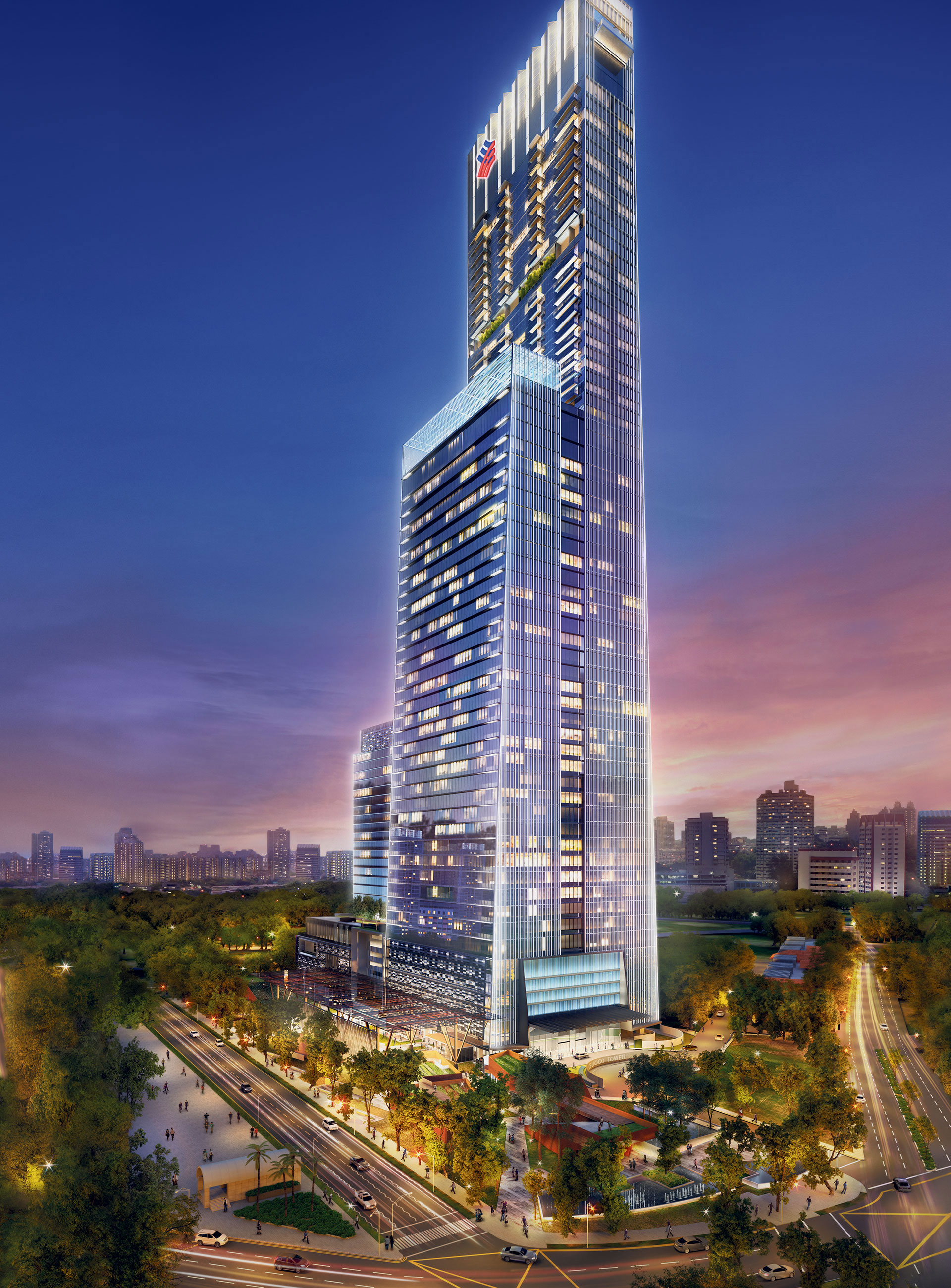 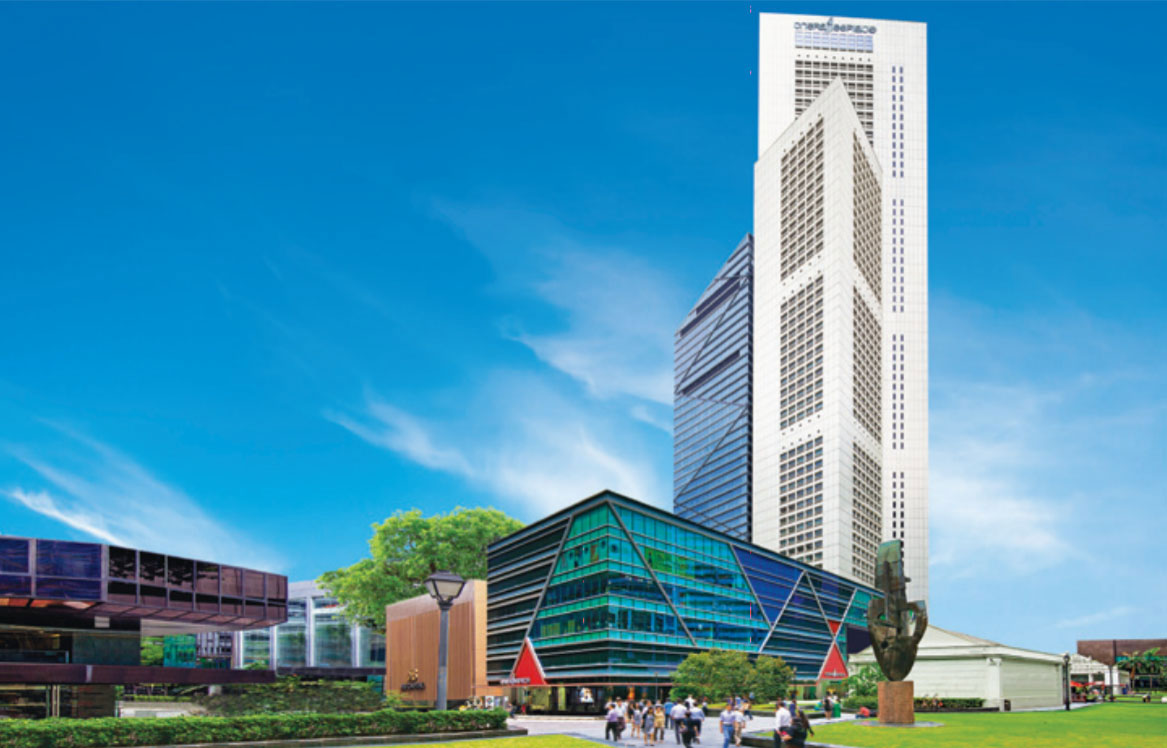 One Raffles Place was once the tallest building in the world outside of America and is 300 meters high. It is one of the tallest skyscrapers in Singapore and shares this title with the Republic Plaza and the UOB Plaza. This tower in Singapore is located in the middle of Raffles Place and is architecturally impressive. Two triangular structures have a small pillar in between. The entrance to the building is just as spectacular and has skylights in an 8-level cutout. 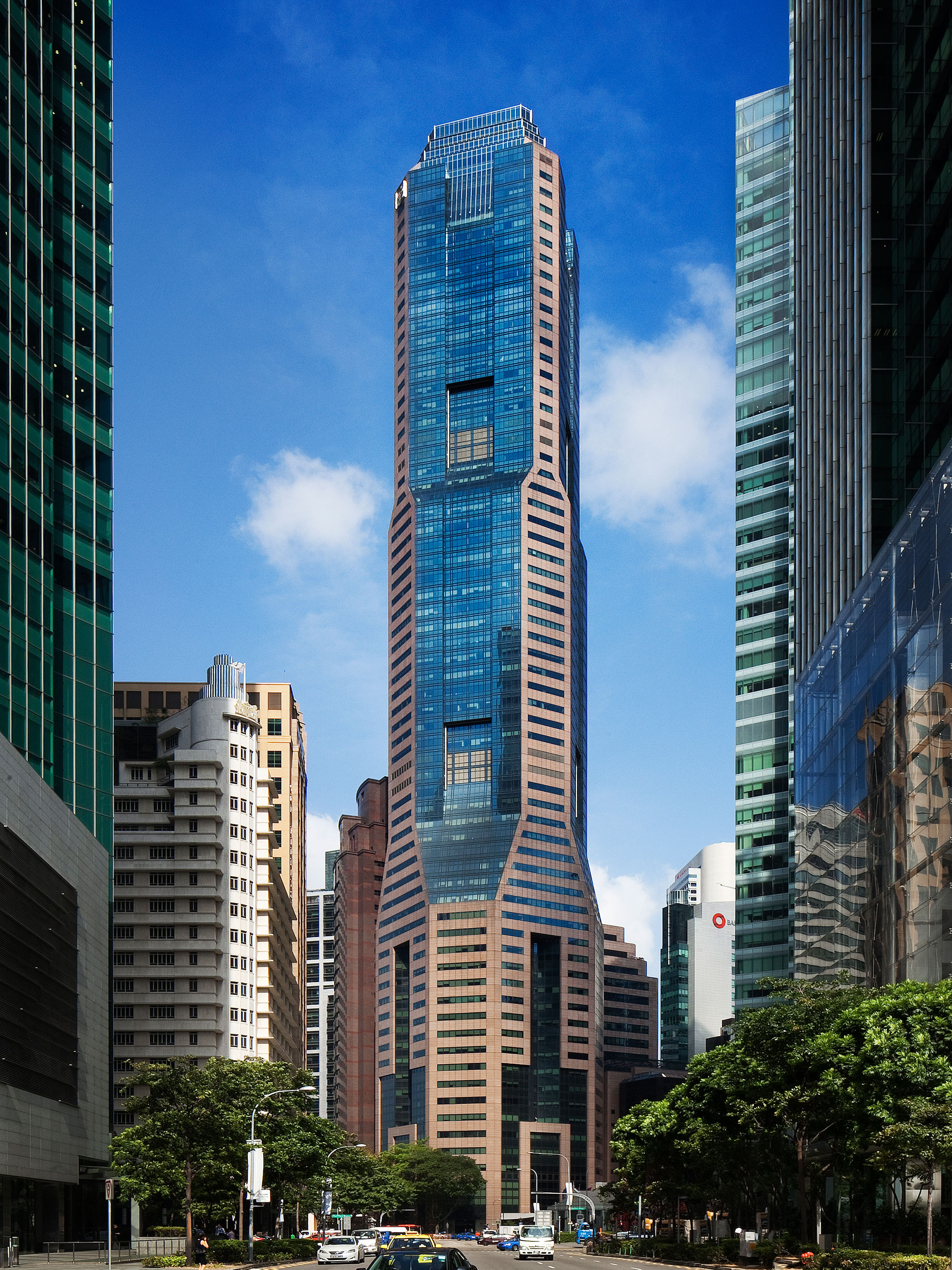 Republic Plaza is located in downtown Singapore and is 919 feet high. It was completed in 1995 and is located on Raffles Place.

Much thought went into the construction of this building. Although it is now near an earthquake zone, the building has been made earthquake-proof. The structure is sturdy with a strong base and a tower that gradually tapers. The central core has emergency stairs and a number of elevators.

Though convenient, this building in Singapore is also very attractive. It has a large ceramic and granite lobby. The lobby is 4 levels high. It also has 15 double decker lifts. Within this tower in Singapore there is a large retail area and offices located around the central core. 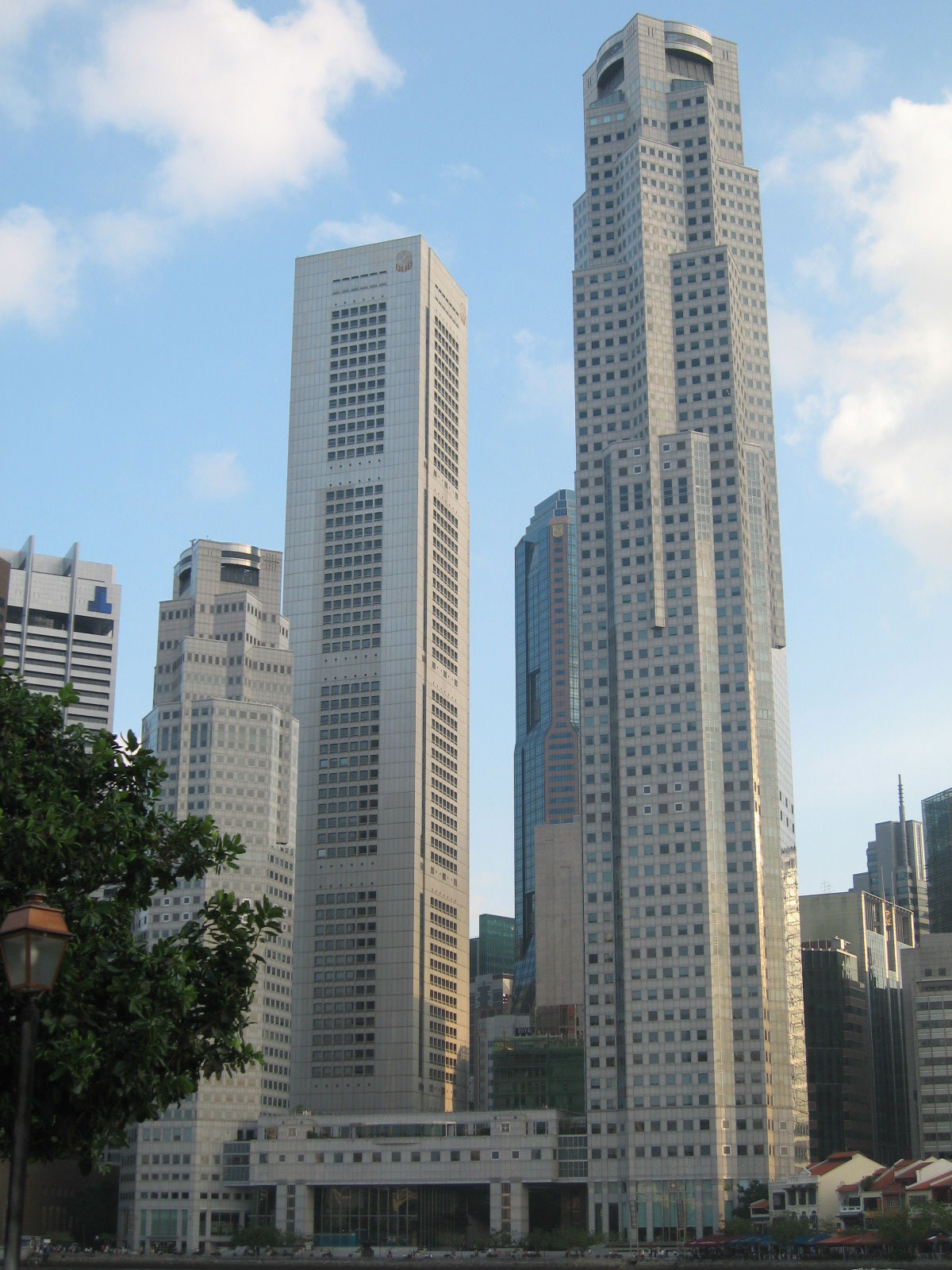 United Overseas Bank Plaza One (OUB Plaza 1) is connected to three other buildings as the tallest of the skyscrapers in Singapore. As one of the tallest buildings in Singapore, it is the perfect headquarters for United Overseas Bank. The Singapore Tower is also home to the Si Chuan Dou Hua restaurant. There is a mosque in the basement and its underground location has caused some controversy in the Muslim world.

This Singapore tower is connected to a second building, UOB Plaza Two, by a 45-meter podium. This is an older and shorter building in Singapore. 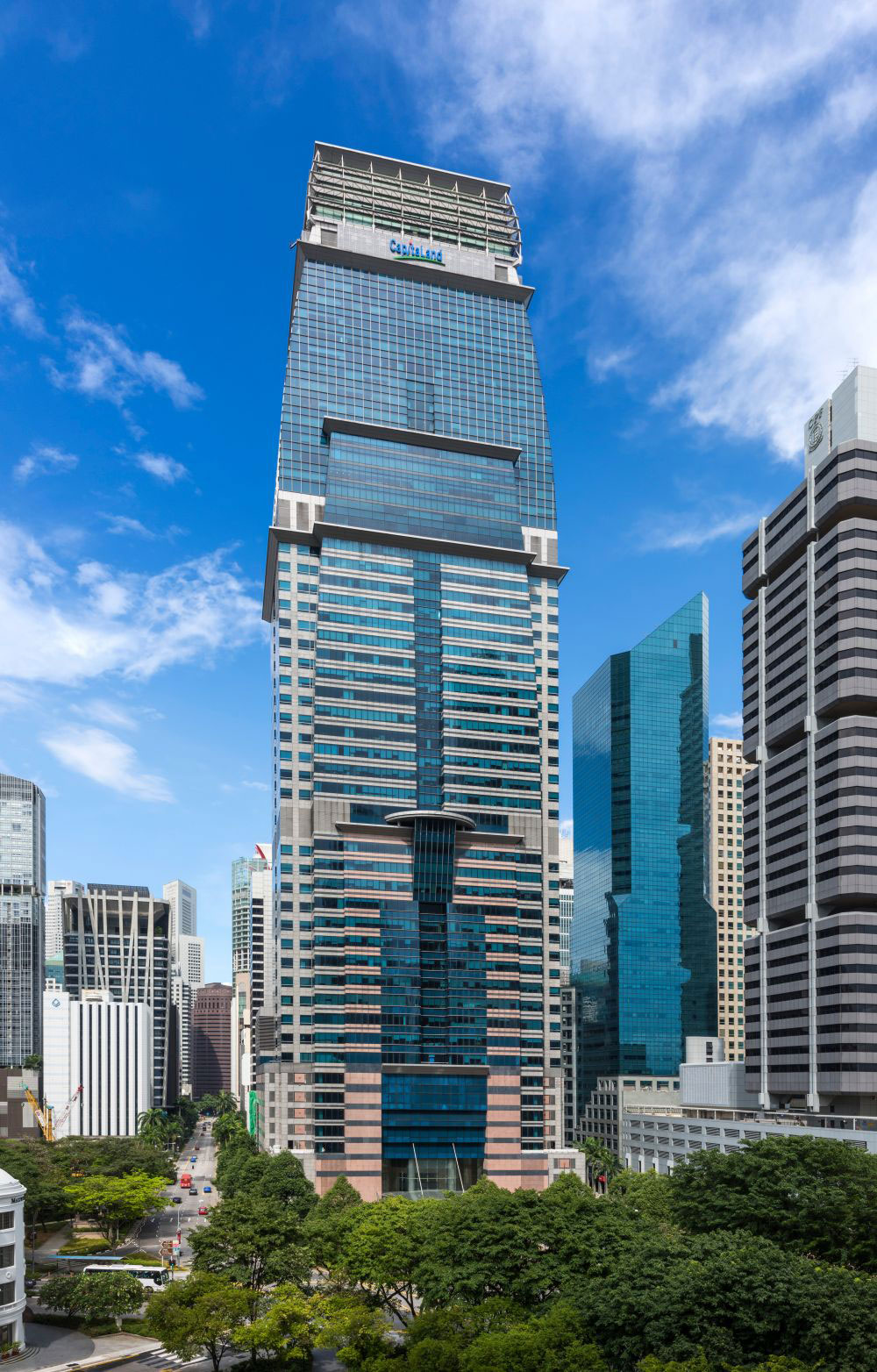 This building in Singapore was erected in the Capital Tower. It is a 52-story, 254 m high skyscraper that was completed in 2000 in the Shenton Way-Tanjong Pagar business district. At 254 m, it ranks 4th among the skyscrapers in Singapore. The building, which was originally the headquarters of POS Bank, was taken over by Capital. It soon became the flagship, and this tower in Singapore was named after the company. It has 52 floors and 5 breathtaking elevators that run at 10 m / s.

The building adds to the Singapore skyline at night when the logo stands out against the dark sky. The building blinks against the horizon and changes the color of its lights every few seconds

The financial center of Marina Bay 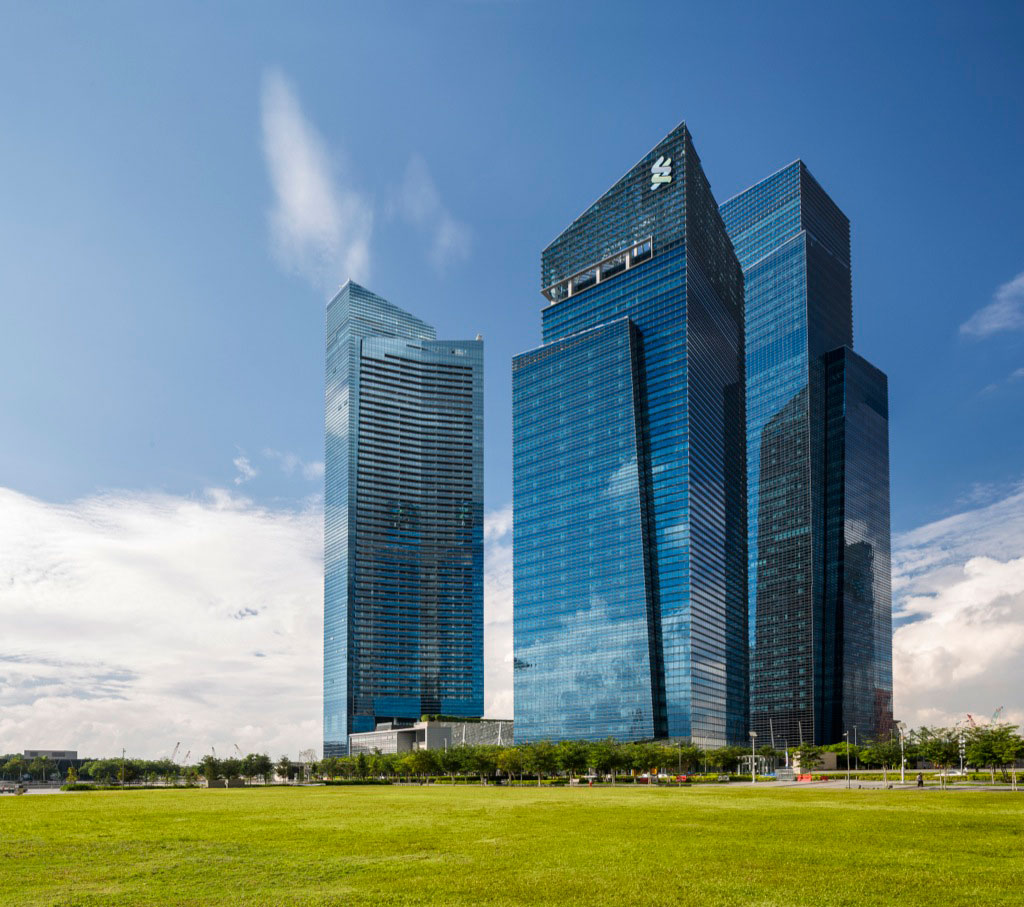 The financial center in Marina Bay, Singapore, offers a number of skyscrapers to the Singapore skyline. This mixed development complex has three office towers and two residential towers. These buildings in Singapore are complemented by a retail area.

The complex is located between Marina Boulevard and Central Boulevard in Marina Bay. The construction was planned in two phases, with two office towers and a large residential tower that was built into the first construction phase, as well as some retail space. The final office, residential towers and retail space would be completed in phase 2 of development. These towers in Singapore add significantly to the skyline.

The sail in Marina Bay 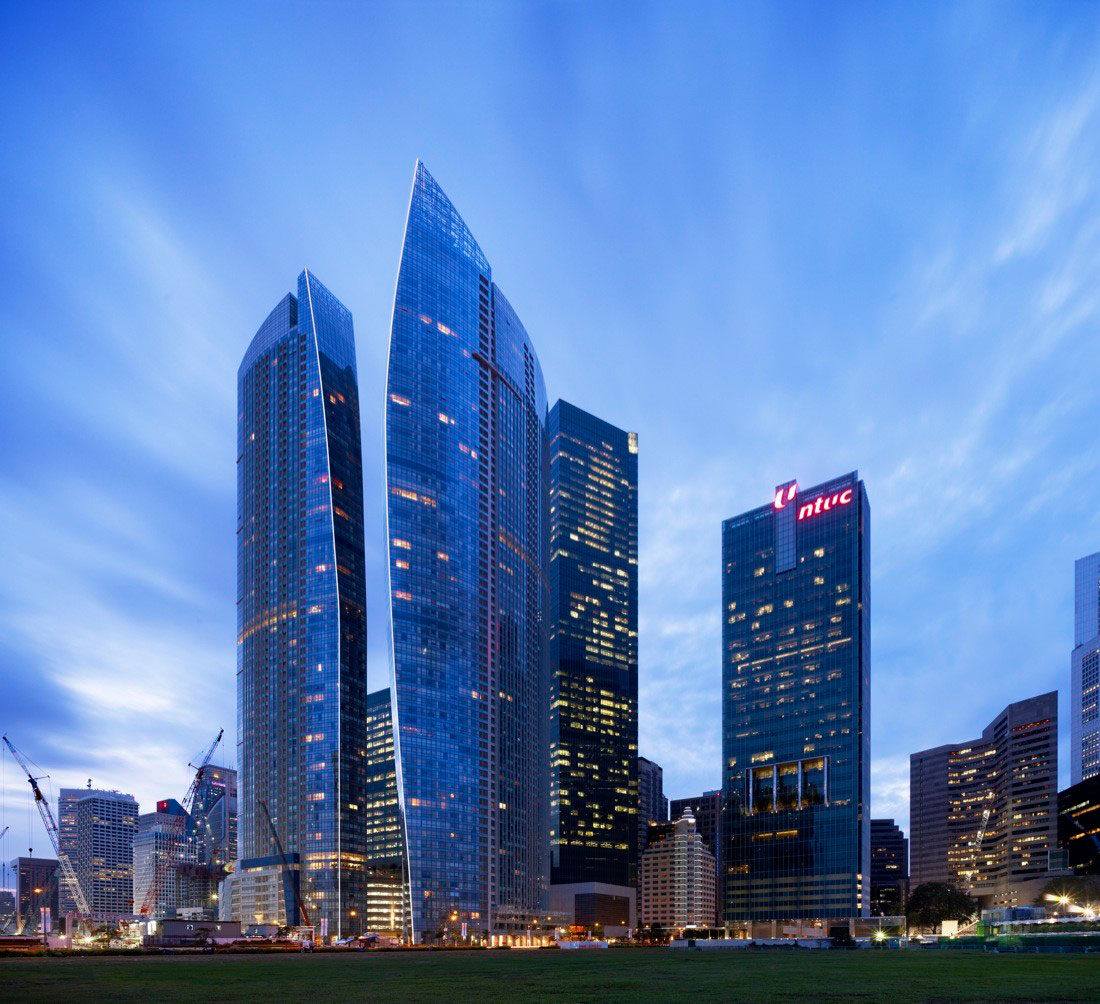 The Sail was completed in 2008 and is a lifestyle apartment in Marina Bay. This is one of the tallest skyscrapers in Singapore with 70 floors and a 245 m high tower. The residents enjoy an incredible view of the city and the sea. No wonder they moved in shortly after the building was completed.

Aside from the incredible architecture and gorgeous views, this Singapore building adds extra appeal as it is close to landmarks like the Singapore River, Suntec City, Marina Bay Sands, Esplanade, and Telok Ayer Market 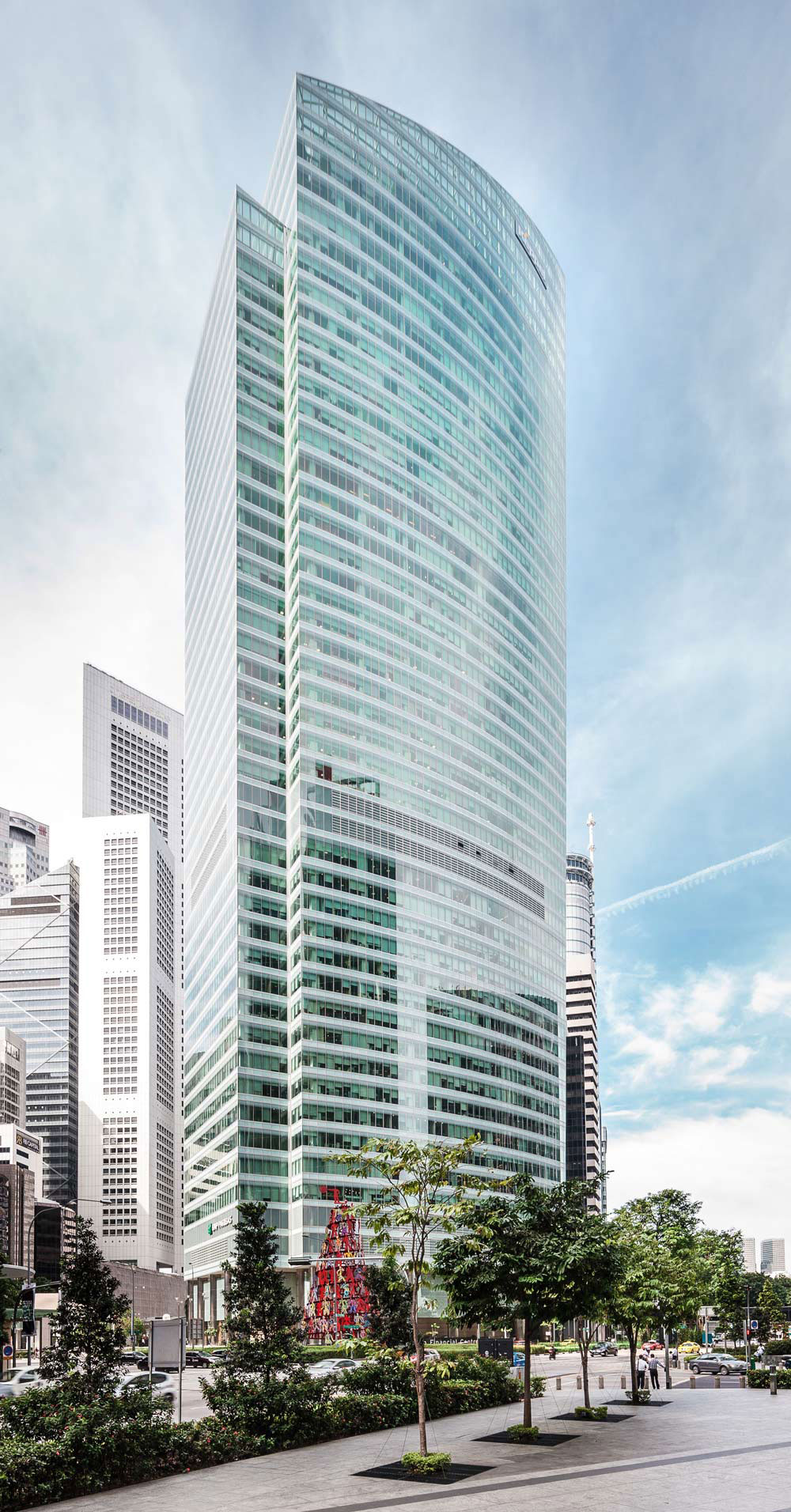 The Ocean Financial Center is a tower in Singapore that was built on the site of the old Ocean Building. This building in Singapore has been demolished, but the new building has retained the name and many of the tenants that belonged to its predecessor. The building serves as an office building and is located next to Raffles Place MRT station and provides easy access to commuters. The large solar system contributes to sustainability.

Many Southeast Asian countries have tall towers or are at least planning to build some towers. However, Singapore has height restrictions for many areas in the city, and no Singapore skyscraper is allowed to exceed 280 m. These areas of the city are often in the financial districts that would benefit most from tall towers. Raffles Place and Marina Bay Sands, where many tall towers are erected, are subject to this height restriction. The height restriction is due to the Paya Lebar Air Force Base, less than 10 km away.

If you enjoyed reading this article on skyscrapers in Singapore, you should read this too: